Unfiltered Audio Zip – Beyond the Limitations

Hi and welcome to this weeks review. Of all the devices used for production in a modern DAW, the compressor must have to be the most widely available. To shine above the literal tidal wave of competition, Unfiltered Audio will need to pull some pretty impressive tricks out of the hat for their new VST compressor plugin, Zip.

I have been a big fan of everything we’ve seen so far from the company, especially the excellent delay processor Sandman Pro. Utilising its signature built-in modulators greatly expands the Zip’s core functionality, offering both traditional studio and live performance applications.

Zip acts a fairly traditional track compressor on the surface, but dig deeper down and you’ll find more emphasis on the dynamics of the dynamics – you’ll see what I mean in a minute.

All your traditional controls are here, threshold, knee, attack, release and output makeup gain. A few advanced, but still fairly well-understood controls are present, the lookahead, mix, and input filter controls. You can convert the compressor to a downwards expander as well, technically turning it into a gate.

Most noticeable in the GUI is a huge visualizer showing a wealth of information. This is a kind of dual-mode screen, on top is the compressor threshold, ratio and knee display with a dot showing your threshold level, underneath is the analyser target levels in blue, the current output levels in purple and the current compressor reduction amount in red. There is certainly a lot going on here, but a surprisingly effective use of space once you get a feel for the readouts. You can see direct relationships between input and compression effect, which is pretty awesome, not at least from an educational point of view, but visually is much easier to make judgment calls on processing amounts.

Even though the GUI is quite contemporary with its white on black minimalistic design, much of the device’s functionality is second nature once you’ve played with it for a few minutes. All of the wackadoo stuff is tucked away out of sight until you call on it to do something interesting.

Looking closer at the unique feature set of Zip, the input can be set to either input analysis or sidechain, both with a blinking pair of blue LED’s representing input signal. The analysis mode has 6 settings: amplitude, quietness, brightness, darkness, noisiness and tonalness. Each mode is then represented on the visualizer screen as a blue overlay, indicating the target response the compressor will be concentrating on. When beginning a mode should be chosen to best reflect the source input, which will take some practice and experimentation at first. If you’re unsure, just go with the amplitude setting. Swapping between RMS and Peak mode will change the response of the compressor, Peal being faster.

Amplitude is your default, and will actually work fine for anything if you’re in a rush (or lost). Zip looks to process the loudest signal as per your typical compressor. Quietness, on the other hand, looks for the quietest signals, hence silence sections will appear as full blue in the visualiser. Brightness works on the frequency response of the input, marking higher frequencies as louder. Likewise, the Darkness setting works on the lows. Noisiness is a tricky one as it looks for rapidly changing frequencies it considers noise, as tonalness looks for the opposite, long stable frequencies. The input analyzer mode is key to obtaining the best results and is most noticeable on frequency-focused signals, such as bass guitar, kick, cymbals – anything.that is clearly defined in a specific frequency range. 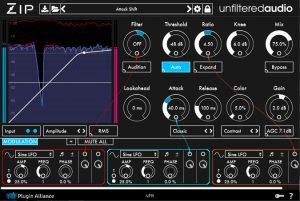 Perhaps I’m using it wrong, but I found excellent results by dialling in the right input analyser mode and pushing the compressor harder than normal, then using the mix control to blend back into the original signal – aka NY parallel compression mode. On bass guitar, for instance, the darkness setting is magic and with the mix control set around 50%, I found pushing quite hard with a good amount of colour added resulted in remarkable results. It means using the compressor more as an effect than a dynamic shap[er, but the reasons make more sense once you start implementing some of the animated modulator effects.

However, you decide to use Zip, as you can imagine, choosing in the right analyzer mode for your signal is still imperative to draw the best response from the processors.

The filter forces the analyzer to focus on specific ranges of the frequency spectrum. The manual says this only works on the sidechain, however, it works on both inputs. This is a great starting point for dialling in focus areas, or at least, avoiding areas you want to be left uncompressed.

The envelope section has four styles available, classic, goopy, quick and extreme. These affect the envelope behaviour and are fairly self-explanatory, though, for the record, ‘goopy’ refers to a sluggish, vintage and muddy feel, according to the manual. The colour control again features multiple options, each adding analogue distortion or filtering. While it doesn’t claim to replicate any specific hardware or vintage device, if you know what you’re looking for, you can achieve quite convincing vintage-like results once you become familiar with the colour and modulation controls. Zip doesn’t have so much of a signature ‘sound’ but, as you can see, is certainly capable of very characteristic results.

The modulator section is where Zip comes to life. Users of previous Unfiltered Audio devices will be well used to the capabilities of this system but it takes some experimentation for newbies to realise the potential. Enabling a block module will display little plug holes throughout the device where you can insert virtual cables. You can simply drag an output cable to any input and the modulators are linked.

The savvy will notice the modulator block itself has in and output ports, so you can actually self-modulate a module for some interesting results. Patching around the compressor is a breeze, unpatching or moving cables is done by click and holding the slightly thicker end of the cable. It’s a little fiddly, especially since the UI doesn’t scale, so on my HD monitor the cables are positively tiny. But you don’t need to move them much so it’s not a major issue. 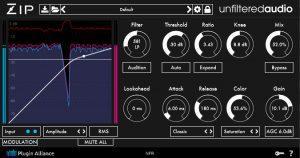 I’m not entirely convinced all the extra modulator functionality is well put to use on a compressor, it feels a bit over-engineered. But at the same time, I can easily see this as a game-changer in your mix on that one time you do manage to find an appropriate place to utilize it. For me, the consistency carried through in the series means once you understand the principles, it applies to all the plugins in the series. It’s put to far better use in Sandman, for instance, where the delay plugin is perfectly matched to the animation effect.

Due to the input dependent nature of a compressor, it’s very difficult to become overly familiar with the modulators, as they sound totally different depending on what you feed into the compressor. Your basic LFO movement is more predictable on the gain and mix controls, but when applied to the threshold or envelope controls any number of weird and wacky results could be achieved, and it’s all mostly guesswork.

Zip has the potential to become wildly complex, depending on how far you let your imagination take you. But whats more important to me is how easy it is to use as a daily, go-to compressor. Once I had my head around the workings of the screen I found myself constantly checking here for visual feedback. Many time for one reason or another my settings were visually too hot, or not pushing the device hard enough when it needed to. So for all its complexity, I never felt lost or like the device was getting away from me, there is always the big visual indication of your settings. Great stuff.

While its hard to start doing summersaults in excitement over a compressor, no matter how much the product website claims it’s a revolutionary device, I found 95% of the time I was using Zip as a standard compressor, the other 5% of my time spending way too long mucking around making silly noises and getting nowhere fast.

That’s not to say I don’t appreciate the functionality Zip offers, as when the need arises and you’re stuck for ideas for something unusual or left-field, the modulator blocks in all of Unfiltered Audio plugins have a habit of coming up with some neat little nuggets of inspiration at the perfect time. Sound design producers will love the flexibility, but due to the random nature of the modulators, the results might be too experimental for some.

$149 is a lot to ask for what is essentially a fairly rudimentary device. Though its capable of great things, most of the time you’ll just need to control the bass, reign in the overheads, fatten the vocals or something equally menial. There is a good chance you’ll reach for your stock plugins to perform these jobs as they’re just dependable and you don’t have to think too hard about using them. Zip might become one of those plugins that’s waiting for the chance to shine, but ultimately just sits there at the back of the cupboard gathering dust.

Zip may be a bit too clever for its own good. Though it’s capable of some excellent, super-focused results when the time is spent honing the colour and filter and analysis modes and envelope mode and the threshold and the gain and the….I just don’t have the time to go through the motions on a 60-track mix when my LA2A just sounds great, drop in, turn up, jobs done. Everyone should have technically advanced processors for when the time is available to spend setting them up, personally, I would be more impressed with a compressor that just has one big button in the middle of the screen saying ‘press me’.

Zip is a predictable compressor that turns into an unpredictable plaything when needed. In a mixing environment where precision is what you look for, sometimes a little crazy is what you need, particularly if you’re finding your mixes are a little flat and lifeless. Sandman Pro and SpecOps implement the party trick modulator functionality better, but Zip is still an excellent compressor and certainly worth learning the ropes for that one time when it’s going to completely revolutionise your production.