Welcome to StudioWise, we’re looking at TH2 this week from Italian developer Overloud. In such a crowded market the company enjoys a great reputation for quality and tone from the first TH1 incarnation, and their latest variant again looks to have proven equally popular amongst the fanboys.

There are a ton of great products out there now offering almost unlimited amp, cabinet and effect setups, but the biggest hurdle amp sim developers need to address is the responsiveness and feel because as we all know, guitarists are an old-fashioned bunch and tend to be very particular about such things.

Being somewhat of a newbie to the virtual amping scene, I can’t wait to jump in and try it out. With some trepidation, I leave the cover on my old Soldano and instead this time plug my Gretsch into a USB interface….this may not end well. 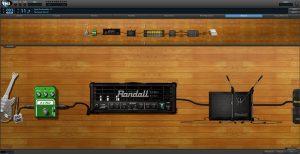 TH2 is a virtual guitar effect studio that replicates the workflow and signal chain of a typical studio recording session. Controlled with either a MIDI guitar library like Scarbee Funk Guitar or, preferably, a real guitar hooked in via an ASIO interface, you can cycle through presets or design your own custom rig, from the foot pedals right through to the mixer output.

The plugin features a good collection of amps, cabinets, FX and microphones to fiddle with, in fact you get 20 effect units, 18 microphones, 45 unique amps with 120 modes between them apparently, though I didn’t get a chance to fully test every single combination, it’s definitely got a lot of content. The vast majority have cryptic names, like Rock900 and SloDrive that you need to decipher, though Randall, Brunetti and THD amps have fully licensed emulations to use.

The interface depicts a studio floor with the complete signal chain spread out in full view.  You have a slip screen overview at the top and a zoomed in closeup bottom half where you build your mega-rig.  Annoyingly you can only use the bottom zoom screen to move around, so getting from one end tot he other requires three or four drags. Dragging around the interface is quite buggy, often my mouse refuses to let go of the screen until I click three or four times quickly to force the UI to let go.

You can also swap out the background texture for some really horrible looking presets, though fortunately, you can import your own images to set your own style.

The elements all look slightly cartoonish but nice and crisp with easy to read controls – other than the Brunetti amp, which is just gibberish. Loading a custom element is quite simple but either right clicking something that is already there, or left clicking on a cable that glows when you mouse over it. There a no real limitations on signal flow, which is interesting. You can even add an amp AFTER a cabinet if you so desire….which will sound pretty bad, but you can do it. There is a good selection of effects, from chorus and flanger to your typical distortion stompboxes, and the multiple mic choices all can be moved around to your favourite cone position. 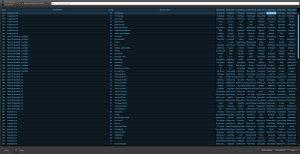 TH2 has a weird browsing system which takes a little getting used to. Presets are categorised by banks, then sounds and finally variations. Each sound contains 8 variations, and the banks are sub-divided up into groups of 12 sounds by the amp brand. To find new presets you hit the ‘search’ button and browse through the available setups, which you can audition by clicking one at a time. To load a single patch you choose ‘load variation’, or to load all 8 choose ‘load sound’, which definitely could have been worded better.

At the bottom of the main screen is the ‘Smart View’, a quick access collection of customisable macro controls for your rig. The default setups work pretty well, though you can easily swap out controls for ones that work better for you.

Along the very top is a tuner, a totally pointless ‘Live’ button, which only prevents prompts when you’re saving tones (?!?), and a master section which displays a global control panel that overrides any amp settings you have in your setup. Not so usable in the studio but for live, I can see this as being quite handy. 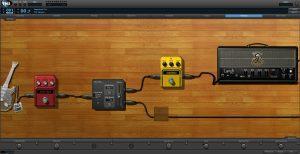 Creating a rig from scratch is not as easy as Guitar Rig, you need to think horizontally instead of vertically. While coming up with a simplistic stompbox/amp/cab design is fine, getting creative with long chains of effects and amp placements starts getting unwieldy. Creating extreme voices is difficult with the basic amp and cabinet layout, the EQ controls for the amps are pretty weak, to get any real effective EQ you’ll need to insert an EQ pedal.

I like the basic layout concept, how you can visualise your entire setup, drop bits in anywhere and assign custom macro controls – its cool, but its so very clunky and poorly executed. After 15 minutes I was over it and wanted Guitar Rig back. The best use for TH2 is to avoid anything wacky and stick mostly to the presets with a few modifications.

But wait, how does it sound?

Of course, I needed to compare TH2 to the competition, so a mini-shootout of sorts was arranged at the Music Nation studio with a whole bunch of amp sims we currently have on file, including Guitar Rig, Amplitude, Kuassa, X50 and even a combinator patch in Propellerhead Reason that promises great things.

There is no doubt each has their strengths and weaknesses and can deliver great guitar amplification, but my main interest is in the playability,

Well, here’s the big thing, and I do mean big. For all my grizzling about the strange workflow and buggy interface elements, all that stuff is fixable, and mostly forgivable – as the sounds absolutely superb. I mean amazing, way beyond even Guitar Rig and even Amplitude. It’s not so much the amp tones and effect, but the responsiveness is incredible. It’s the only amp sim I played that reacts like a real guitar amp does. 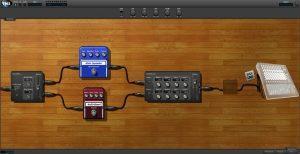 It’s hard to explain unless you’re playing it, but so far all of the digital amp sims I have tried sound good, but feel dead in your hands, I guess like you’re remote controlling a mannequin in another room that’s playing the guitar for you – there’s a real disconnect. Not so with TH2. The amps react to your input, to the velocity you hit the strings and the release tail breaks up nicely like an analogue amp does. Also noticeable in the guitar output gain, a trick I love to use is to play around 75% volume on my guitar, and increase the amp gain to compensate – I find you get a lot more character when the pickup isn’t maxed. TH2 properly responds to this, unlike the others.

Overloud have truly captured the subtle harmonics and warmth of a real amp too, and as much as I like the others (especially X50), TH2 is standout for this reason. I just wanted to play all day, with the others I mostly wanted to fiddle and muck with settings, then just don’t feel right.

Of course, Amplitude has the immense collection of amp models, Guitar Rig is a lot better designed with more flexibility for creative application, X50 is amazing one-trick pony – but its an awesome trick, Kuassa is doing great work for a small company, and even the Reason combinator patch is pretty good if you’re into tinkering with patch cables – but for straight up, plug it in and rock – TH2 is streets ahead.

A bit of a mixed bag when it comes to the interface, though I’m totally willing to overlook the clunky and annoying layout as the amp tone is great and the responsiveness is amazing. Not every amp model is for me, I actually particularly like the standard TH2 Amplifier model with the VariFire boosted, I can get it quite close to my real world HiWatt rig.

I’m interested in testing this in a live situation soon, though my laptop will need a fairly serious RAM upgrade before I’m comfortable trying this.

So, cool software with loads of usable tones and configurations. Great value at $199, and though it lacks some of the fairy dust of Guitar Rig and the variety of Amplitude, its outright smashes them with tone and playability, and at the end of the day, that’s the most important feature in my book.