T-RackS 5 is a 64-bit application and requires a 64 bit CPU and Operating System.

Hello and welcome to StudioWise. It’s been a big week for IK Multimedia with the release of their all-new T-Racks 5. I’ve been counting the days before I could get my grubby mitts on the new software for a play.

There’s no secret we love IK Multimedia products here at Music Nation, but it’s also important to look past the success of previous products and review with fresh eyes. T-Racks is one of the company’s flagship products, so with such big shoes to fill I hope they can retain the lineage the platform is so respected for in the industry.

It’s always a little scary when a major new release of your trusted go-to software get a makeover. Fortunately, this has been a long time coming, so I’m glad T-Racks has finally been given the facelift it deserves.

T-Racks is available in a selection of bundle options, so of course – let’s go crazy a grab the biggest one and get installing.

T-Racks 5 is the latest incarnation of IK Multimedia’s original 1999 release. The main concept behind the program is to provide a fully featured, sandbox style stand-alone mastering platform.

The idea is you create your tracks in the DAW of choice, then export the WAV files for final processing in T-Racks. As a bonus, you can also load the ‘suite’ environment, or in fact, any of the included plugins as individual track plugins in your DAW for use as VST track effects.

With this in mind, the vast majority of the effects are mastering orientated, so don’t expect to see anything too crazy. There is a good selection of reverbs, a tape delay and that’s about it. Everything else is filters, dynamics, saturation and stereo processing.

The argument against providing so many devices in this type of product is the ‘Jack of all trades, master of none’ debate. Of course, it’s not viable for a single platform to offer a huge range of deeply modelled devices at a budget-friendly price. I won’t dispute each of the devices included couldn’t be outclassed by some other more focused and expensive product, but as a homogenous collection, the end goal of T-Racks is to master tracks with as simplified workflow as possible.

Firstly, let me say amazing job on the interface, it looks gorgeous The fully scalable UI with individual sizable panels is very well laid out, with crisp graphics and a clear workflow. I love, love, love the new flat sheen look, a huge step up from the previous design and gives the whole platform a very pro look. Please, somebody, send a copy to the Amplitube department – this is exactly how a great workflow looks. 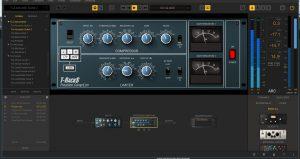 The signal-flow screen is so easy to follow now. Drag and dropping new devices is a snap, you can add something inline or parallel to another device to create a split. You can’t, however, replace a device by dropping another on top, you need to totally remove it first. Not a biggy, but a pain when you have split signal setups in place. Slightly more annoying though, there is no monitor level control, argh.

The preset selection is moderate, but mostly very useful and well thought out patches.  Of course, being predominantly a mastering platform, you’re not going to find any wacky creative effect chains here, its all mostly down to business limiting, saturation, EQ and the likes.  Each individual device does, however, have its own separate preset menu which offers a little more interest. These, I’m sure, are more intended for use as individual track effect presets in a DAW environment, not the stand-alone setup.  Then again, if you want to master in some crazy reverse tape echo with pumping sidechain compression, it’s there for you to do. 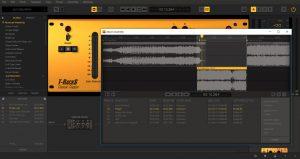 The Album Assembly function allows you to build final burn compilations for your tracks, complete with fades, ISRC encoding and copy protection. This has always been the shortfall of DIY mastering programs, so having an in-house professional grade exporting system is wonderful news.

Pricing is not bad, considering the number of high-end devices that are included. The base will run you $250 through to an eye-watering $885(NZD) for the full monty. The base version actually contains 9 effects covering everything you need, and you can always add on more bits from the Custom Shop as applicable. For mastering studios, the Max bundle is the best value containing all 38 precision effects, outstanding value considering each is around $150 separately.

IK Multimedia has an incentive program called Jam Points, so if you’ve bought from them before you can use them to offset some of the cost (up to 30%). If not, every purchase earns you 5% of the retail value. Doesn’t take long to build up a decent credit account.

The optional signature presets are a must to download, featuring a curated selection from Nick Davis and Tom Lord-Alge.  Great starting points and insightful tips on how the greats get their signature tone. 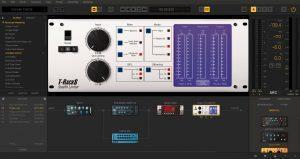 As individual DAW track effects, this really is a star-spangled showcase of all the major devices you’ll ever see or need in a studio. Other than the super rare and obscure stuff, you find all the brands you’ll ever need right here – Neve, DBX, SSL, Urei, API… 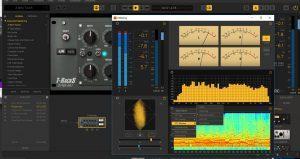 My only minor gripe is the individual device presets are all very hot and aggressive. If you already have a high amplitude source track, most everything will overdrive and peak as you roll through presets. The obvious fix is to pull back the track gain so it’s not a big problem, but it does make you cringe a little on first listen.

The VST suite is probably not needed, it looks to draw around 3-5% DPS just sitting there and only contributes the output meters, something your DAW should have covered. It’s good for saving preset chains, but again probably superficial.

A great deal was made out of the new ‘Audiophile-grade’ audio engine, whatever that means. To my ears (and my meters), I can’ hear any difference whatsoever between this and the older T-Rack CS devices. For better or worse, they both sound great.

New Kids on the Block

Let’s have a quick look through the four new devices included with T-Racks 5.

The big yellow ‘One‘ was my first test unit of the new devices. Its a mastering compressor with a very soft and wide sound, as to be expected. The large push dial is a simple compression effect that balances in and output. It has a very natural and almost transparent sound, mostly all you need for master bus levelling. The air, body and focus work on high, mid and low-frequency bands as expected. A transient shaper is included, a bass punch tightens up the low 100k range, plus an analogue adds harmonic distortion, in theory creating a little warmth and character. Finally, a stereo width control works well with minor enhancements, just not too much or you’ll induce phasing. An excellent, one-stop-shop really for final mix polishing. I really like the basic punch dial mostly, I’m quite surprised how transparent it is on full mixes.

The Dyna-Mu is a tube compressor for taming individual track dynamics rather than busses like the One. This is a very aggressive compressor, but quite forgiving and won’t bite your head off if you want to push it hard. It can be somewhat transparent in lower settings, but anything pushing over 4-6db in reduction will introduce a fair amount of colour. The dials have no indicators other than vague position markers, so everything is done by ear – basically, the way it should be done with this kind of compressor.

I’m not familiar with the hardware equivalent, but to me, it sounds a lot like the Neve Precision Comp/Lim (not including the limiter), especially when you hit it hard with the incoming signal. It’s quite a distinctive sound and may not be everyone’s taste, but if you’re looking for something with plenty of character, this will be your go-to of the collection.

Master Match is possibly the more interesting of the new device. In theory, you can copy the EQ response from a source track and apply it to your mix. It’s marketed as an auto-mix for non-engineers, which scares me a little. But in practices, it does quite a good job of guessing the EQ depending on the source. By this I mean, if you take a non-mastered track you have from another project and apply that response to your new mix, yes it does very well to copy that end result EQ. It doesn’t work too well if you drop Metallica’s ??? over your poorly mixed garage recording hoping you’ll sound the same. The target and source recordings need to be similar in style, instrumentation and mix to get a good result.  You can, however, apply the ‘essence’ of the Metallica mix to your crappy garage mix, but it’s only an EQ setting, it’s not a magic pill fix.

I found this quite handy for bumping all the tracks from an album mix into the same EQ space as each other. Dropping in a commercial release track, considering all the final compression and mastering that has been applied, resulted in mostly high-end emphasis and pass roll-offs, nothing that magically made my mix sound like the commercial track. This is not a new idea, other VST plugins try the same EQ matching trick, but of the bunch, this is the easiest to use with the most convincing results.

Finally, the EQual which is a basic parametric EQ heavily borrowed graphically from FabFilter’s ProQ. It sounds very nice, with more character than I was expecting. New nodes can be added by just clicking on the response line anywhere, and you can use your middle mouse scroll wheel to adjust Q. The DSP requirements are the strongest point, being noticeably less than the ProQ on a comparison. It doesn’t have the full feature set as FabFilters offering, but its simple and quick to use, and with its scaling interface looks equally as gorgeous.

So overall, a nice collection of new devices that should tempt previous T-Rack owners to seriously consider the upgrade – even it the new interface doesn’t.

While sonically, the core system is not a huge improvement over the already excellent T-Racks CS, visually and work-flow wise it’s a massive step up. The new flat look and excellent workflow reset T-Racks as the top dog mastering suite, awesome stuff.

The four new included plugins are a welcome addition to the already well-rounded collection.  Best suited to project studios looking to offer in-house mastering and duplication services, while the budget bundles might suit bands looking to save some money, the best deal to be had is with the full Max Bundle.

I wish the metering section has a monitor control, it’s not logical to turn down the master faders and reaching over to your interface volume can be a pain all the time.

We will be reviewing some of the more important plugins over the next few months, so stay tuned. But today is all about the T-Rack 5 platform, and yes has certainly been worth the wait.  Easy to follow signal-chain, great selection of processors and presets, topped with a powerful project authorising functions, T-Racks 5 really is about as good as you can get.

Full details and purchasing options are on the official IK Multimedia website www.ikmultimedia.com