Welcome back to StudioWise. There is no shortage of reverb plugins available these days, most offering the same basic set of features and end results. But then every now and again something really special comes along that makes you sit up and pay attention.

D16 Group is better known for their Roland synth and drum machine line, but were pretty keen for us to have a play with their brand new plugin Toraverb 2 – a studio space modulated reverb. How could I refuse?

Being a sucker for nice sounding reverbs and delays, I’m always on the lookout for plugins that step out from the norm and offer more than just you’re bread and butter effect. Particularly interesting to me are devices that multi-task and can be used for more than your typical cathedral verb or vocal plate. With a tremendous number of dials and buttons, Toraverb 2 looks exactly like something I can get my teeth stuck into.

Sounds interesting, so let’s get it installed.

Toraveb 2 is a digital reverb plugin featuring two reflection zone controls, one for early reflections, the other for the reverb tail. Both house a parametric EQ, tone attenuation, diffusion and pass filter. Furthermore, you get a pre-delay with a whopping 500ms range, M/S processing and a built-in compressor – not typical things you find on a reverb plugin. Happy days!

Firstly, the interface looks amazing. Retro 70’s brushed aluminium with faux-wooden end caps and oversized LED meters, it certainly looks super cool. The UI is split three ways, with the delay section to the left, modulation in the centre and mixing to the right. On first look, it appears quite busy, and for a reverb unit, I would agree. However, after a short time playing everything becomes fairly intuitive.

Also included is D16’s excellent browsing and patch saving system we saw in the PunchBox synth. Very easy to navigate and filter results. Though there are a good amount of presets to show off the capabilities of the device, I would have liked to have seen more track relevant settings for drums, guitar, vocals etc.

All of the controls are, of course, MIDI learnable, so great news for live performance and studio automation. Everything responds well to mouse control, plus its crisp and clear, easy to read. My only real gripe is the UI isn’t scalable, you have a choice between small or big, which still looks small on our high-rez monitor.

So a good looking and well-featured platform. 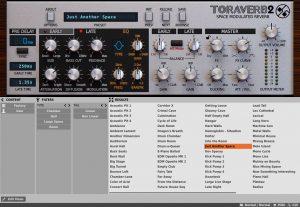 My first reaction to hearing Toraverb 2 on a vocal track was wow. Very airy, wide sounding, almost ethereal quality. Working my way through some of the preset chamber and hall patches presented some really impressive results too, showing off the sound characteristics and workflow in action. It didn’t take long for me to work out the basics without the manual and to start program some custom presets.

Don’t be fooled by the retro-looking UI, however. Toraverb 2 is a very, very modern sounding device. Even set at a fairly plain ambient level, it’s obvious the processed signal is high fidelity and clean. There is zero hint of any analogue float or noise, only a crystal clear digital shimmer. You probably could try to force it to calm down, but every function and control pushes further into more dramatic and imaginative results.

Starting at the output mixer side, the included ducking compressor is a clever inclusion, and one you need to hear to appreciate it’s possibilities. At minimal settings, it pulls back the dynamics of the wet signal as you might expect, but hit it hard and you get very aggressive pumping, very similar to a sidechaining effect.

There is a mini-mixer with individual gain controls over each of the reflection zones, with L&R pan that can be converted to M/S. The combination of compression and panning, especially in M/S mode, greatly accentuate dimensional space created by the reflection controls. Mid/side mixing its such an unusual sound to hear when applied at different levels to both early and tail reflections, it messes with your perspective a little. You can, for instance, reduce the early signal to near mono, and make the late wide stereo – and then try shifting the dry signal with the pre-delay, you get some pretty amazing results.

In the centre of the device are the reflection control zones, one for each early and late reflections. They contain a single-band bell curve or roll-off parametric EQ, pass filter, reverb size, diffusion and attenuation. An interesting crosstalk for the early reflections section blurring the line between left and right on stereo signals, though it’s very subtle and source dependent. The late reflection zone swaps the crosstalk for feedback, which reduces the wave energy, effectively making the reflection strength weaker.

The hardest part to grasp is the modulation control. This introduces time-variant fluctuations to the diffusion network – or in English, it changes the time delay offset between nodes in the diffuser – or in really simple English, it smooths out the reverb tail. Minimal settings make the reverberation harsher than higher modulation settings.

Finally, the pre-delay function, which offsets the dry signal from the wet, introduces very spacey results. Readouts of early and late reflections are here, which can be, incidentally, stretched to an impressive 2.61 and 10.85 seconds respectively.

Having such detailed control over both the early reflections and tail is wonderful, you can really get in there and sculpt out a larger-than-life sound easily, or opt for something more dramatic and creative. Unbelievable on synth solos and even vocals, pretty much anything from a modern pop arrangement.

I did test Toraverb 2 on a very traditional rock and roll track and it was totally wrong, sounding very out of place on pretty much everything. I also inserted Toraverb 2 on an orchestral arrangement, and it sounded good, but not my style – way too hi-fi and clear. On a soloist, or perhaps big percussion lines you could try it, but in my opinion, it’s just far too ‘out-there’ for traditional arrangements. If, however, you’re going for more epic cinematic sound design, this could be just the ticket, you certainly have plenty of options for creating interesting special effects.

Where Toraverb 2 absolutely shines is on modern pop productions. Vocals and synths are amazing, electronic drums can sound amazing if you find the right effect. As a mix effect, again works really well as a subtle wash, particularly on a minimalistic EDM, trap and urban track effects. As a creative effect for samples and loops, awesome. I didn’t have any trouble at all creating amazing track effects using the pre-delay and compressor pushing hard.

Toraverb 2 is loads of fun, with what feels like an endless array of controls to configure, you can get pretty deep if you like, or keep things simple by sticking to the presets.

Performance wise, even on full-length tail setting Toraverb 2 is pretty good actually, only displaying around 2-5% per instance at normal DSP setting. The plugin does have a quality setting you can vary between real-time (low) and off-line (high), but there is a large spike in DPS usage when swapping between the two extremes (nearly double, actually), as expected. Interestingly, I personally couldn’t detect any audible differences between lowest and highest settings, so I’m confident enough to keep the plugin on normal, or even drop to low to conserve DPS if needed – maybe bump it up for the final bounce if you think it will make a difference. The developer commented that there is a difference in sound, but it’s more measurable than audible.

I am very impressed with this plugin. There is so much to explore here, I can’t wait to start using it on much more experimental arrangments and some sound design projects.

Toraverb 2 leans heavily towards creative usages than simple ambient halls and rooms. You can, of course, apply subtle amounts here and there for atmosphere, but you’ll be missing the full potential if you never experiment fully use the functions as designed.

As a daily go-to reverb, I’m not sure this will suit everyone’s taste – certainly not for anyone primarily working on traditional or retro projects. But as part of a collection with a nice convolution, maybe a decent spring verb like PSP Nexcellence we reviewed last month, ToraVerb 2 will certainly fill the contemporary role nicely. At around $55 USD, this is a total bargain and probably one of the most remarkable reverb plugin I’ve used.

A trial version is available, which you should absolutely download now for a listen yourself – I highly doubt you’ll want to give it back.