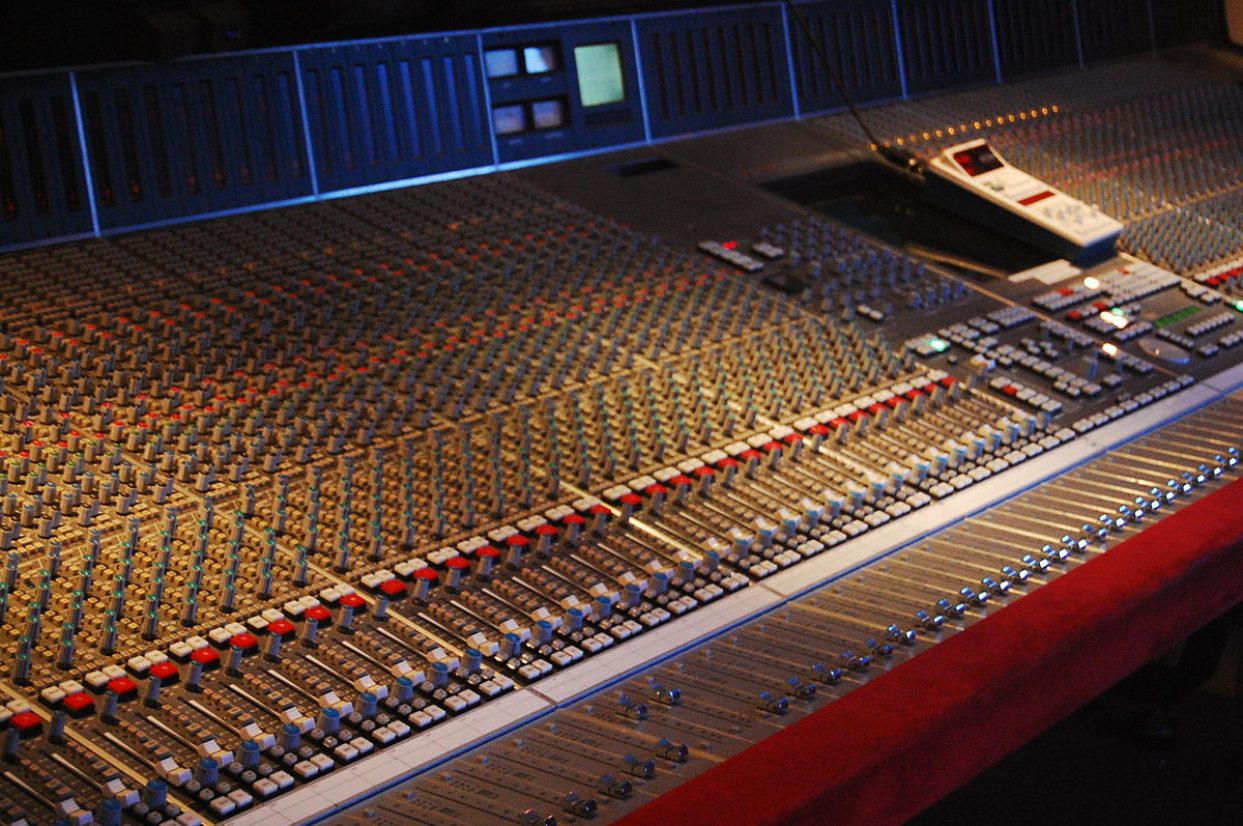 In this article, I’ll be presenting you with a complete beginner’s guide to working your way around small, basic mixers.  This is the first article of several on the subject of mixing desks, this article serving to introduce basic concepts that will be expanded upon in the subsequent articles.

Why do I need a Mixing Desk?

Mixing desks, also known as mixing consoles, sound boards or simply ‘mixers’, can have a wide range of capabilities and applications. They, however, sever serve the same basic purpose: They combine a number of signals together into one signal known as a ‘mix’.

To give a practical example: You are providing sound reinforcement at a business conference for a number of panellists. You have four microphones, one for each panellist, and a speaker system. You require the four microphones to be amplified over the speaker system.  However, it only has a single input. To provide a solution to this, you use a mixer with four ‘inputs’ and one ‘output’. This combines the signals from the four microphones, going in via the inputs, into a single mix which is then sent to the speaker system via the output. All mixers, from the most basic to the most complex, share this same capability.

A mixer will have a number of input ‘channels’, each of them taking a single audio signal which is then combined with the signal from the other channels and send to the output as explained above. On a typical mixer you can identify the channels by a series of vertical strips running down the mixer from top to bottom. At the top of each channel there are the physical sockets to connect various audio devices to the mixer. Mixers tend to have two types of inputs: 3 Pin ‘XLR’ sockets, commonly used to connect microphones, and ¼” ‘jack’ sockets for connecting devices such as CD Players, iPods and Laptops. Mixers will feature at least one stereo channel with pair of ¼” jack or phono sockets for connecting stereo signals, i.e. signals comprised of a separate left and right signal.

Below the input sockets you find a column of rotary knobs. Each of these knobs controls a certain parameter which affects the signal in some way. Let’s examine each control in the order you would find them on a typical mixer.

The mix, i.e. the combined signal from all the channels, goes out of the mixer through its outputs. All mixers will have a ‘main out’, a pair of ¼” sockets for left and right and a headphone or ‘phones’ output, a single 1/4″ jack that carries both the left and right signal to a pair of headphones, much like the smaller jack sockets you find on a MP3 player or laptop. There will have a knob or fader to control the overall level of the mix, sometimes referred to as the ‘master fader’. There will be another knob for the phones output so its level can be controlled independently. As mentioned previously there will usually be a mono ¼” jack output for the aux send, or multiple sockets if there are multiple aux sends.

Most small mixers will have a ‘tape in’ and a ‘tape out’, a dual pair of phono sockets. These labels are taken from the days when mixers were used with tape machines. At this point it’s simply worth mentioning that the tape in can be used as an additional stereo input channel and the tape out can be used as an additional main out. In the next article we will discuss this in more detail and how it relates to the USB connectivity on modern mixers.

And there you have the basic functions of a mixing desk. Even on the largest, most expensive and difficult to use models you will see the same labels, controls and sockets. Before ending this article however it’s worthwhile looking at a couple of special features some mixers may have.

As mentioned previously small mixers often have an inbuilt digital effects unit. Typically there will be a knob to select which effect, or variation on effect, is in use. The ‘FX’ knob on each channel, which functions the same as an aux send, controls how much signal from that channel is sent to the effects unit. Then the output of the effects unit, the ‘wet’ signal, is then combined with the mix so it is heard alongside the original ‘dry’ signal.  An example of a small mixer with effects, is the Alto Zephyr ZMX122FX

Normally the output of a mixer is at ‘line level’, i.e. it is at an acceptable level for audio devices to work with but not high enough to drive speaker systems. Powered mixers have a built in amplifier making it suitable for driving passive speakers. Usually these outputs will be on a pair of  ¼” jack outputs, locking speaking sockets or bare wire connectors.  Examples of these desks can be found in the powered mixers section of the Pro Audio Centre website

This article was written by Kris Heath, PA System specialist at Proaudiocentre.com.