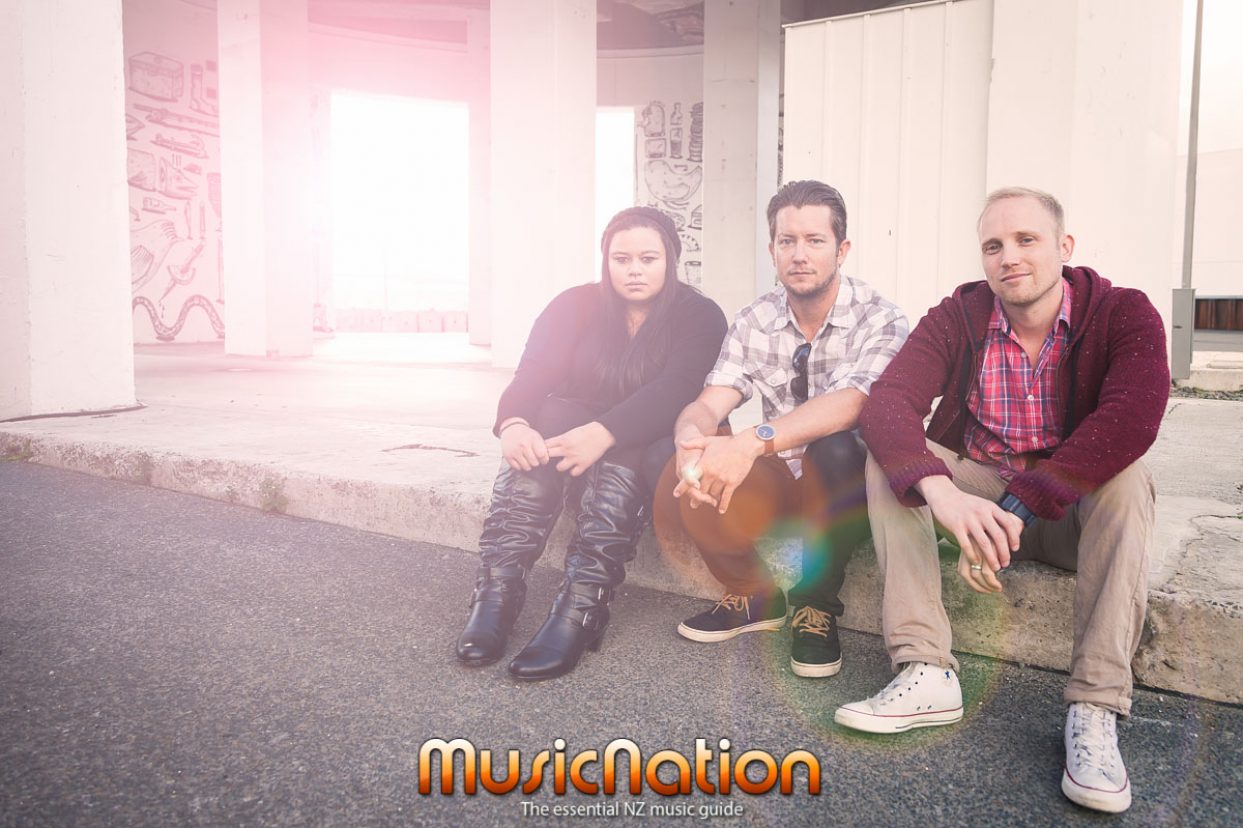 The Nowhere Effect – Nowhere and Everywhere

Once in a while a band comes along that makes you stop and think, yeah – these guys are going to be just fine…

…and Ewan, Shell, and Nathan are taking The Nowhere Effect way beyond fine.

A lucky set of circumstances brought the two boys together on what proved to be a shared destiny.  Ewan Gubbins arrived on our shores from England and spent the best part of a year playing his songs acoustically to pretty much anyone who would listen, eventually catching the ear of local music teacher and classically trained guitarist Nathan Boston.

‘I saw Ewan open for Nick Hohepa and thought this guy is incredible!’ says Nathan. ‘I took his details and we had him open for our band a few times, and he rang me one day and asked if we could have coffee to discuss some music ideas.  Of course I knew his work and he loved my ideas.’

It was not until a name change, and new drummer Shellita Goldsmith joined that the new band, now with its harder hitting contemporary alt-rock sound, began to gather some momentum. Performing bass and vocals in the new lineup, Ewan certainly has a lot on his plate, but there is no doubt his voice is a distinctive element that marks The Nowhere Effect different from anything else you have likely heard before.

Any attempt to describe their sound you would surely have to include Coldplay and The Beatles in the conversation, the band also adding Hendrix and Paramore as early influences on their personal styles.  But really you can ignore all of that because there’s not much here you can definitely finger point and say yes, that is totally ‘xyz’ band.  Perhaps the best way I can describe their sound is it is both unique and familiar, with little snippets of all genres of music that resonate well with me. 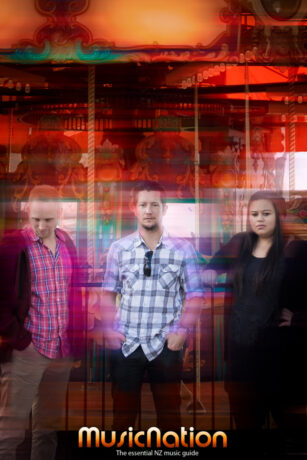 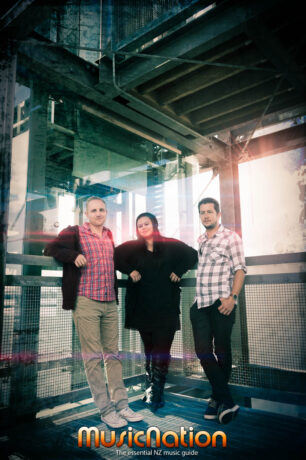 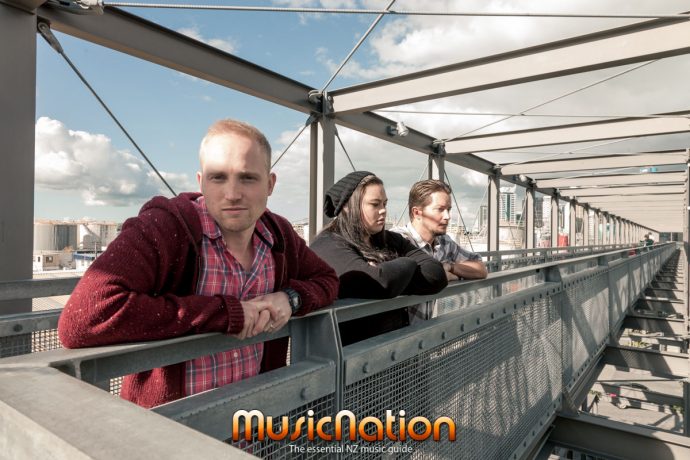 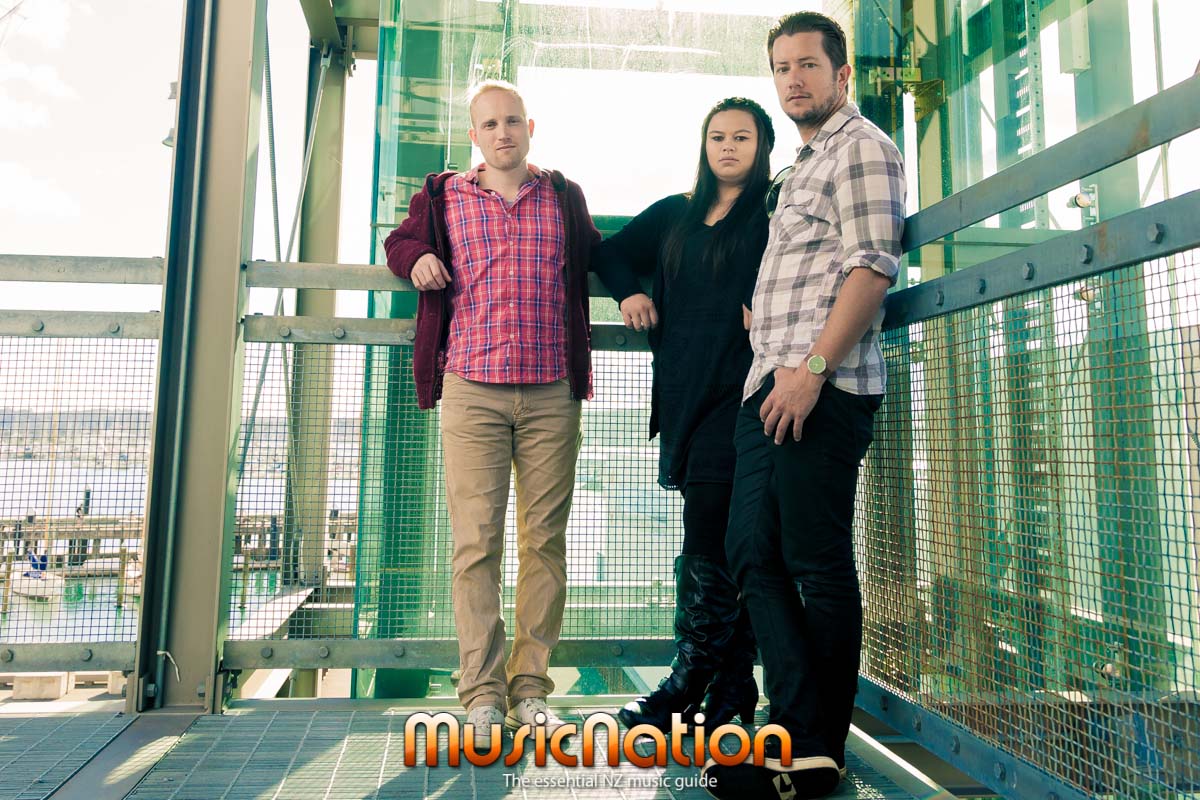 ‘In terms of writing it is a bit of a mixed bag, but (Ewan) is certainly the core writer.’ Nathan says. ‘There are some songs that come from him writing the bulk alone, and we all come together and have an input in different ways, now that we’re a band – often at rehearsals. We’ll get a song up and running, then Ewan will take it away and write his lyrics and then bring them back.’

‘Definitely, that’s something we talk about from the start. We all like elements of darkness or grit. Definitely, that was a conscious thing.  But everything is drawing from real life.’

A 4-week crowd-fundraising campaign netted them enough to rent a few days in Revolver Studio and get their self-titled EP on the streets (including distinctive cover art by Hannah Wilson).  Mostly drawing on Facebook fans and email contacts – the original print run quickly selling out.

The Nowhere Effect are difficult to pigeon-hole. They are definitely rock; that can’t be denied…

…but they are also a clever blend of aggressiveness riffs, incredible rhythms and deep, thought provoking lyrics. The EP is a solid, well-produced collection, however Nathan says there is not much on the EP that wasn’t intentional. It was all planned, and aside from a few little bits and pieces, came out pretty much how they wanted and heard it in their heads. 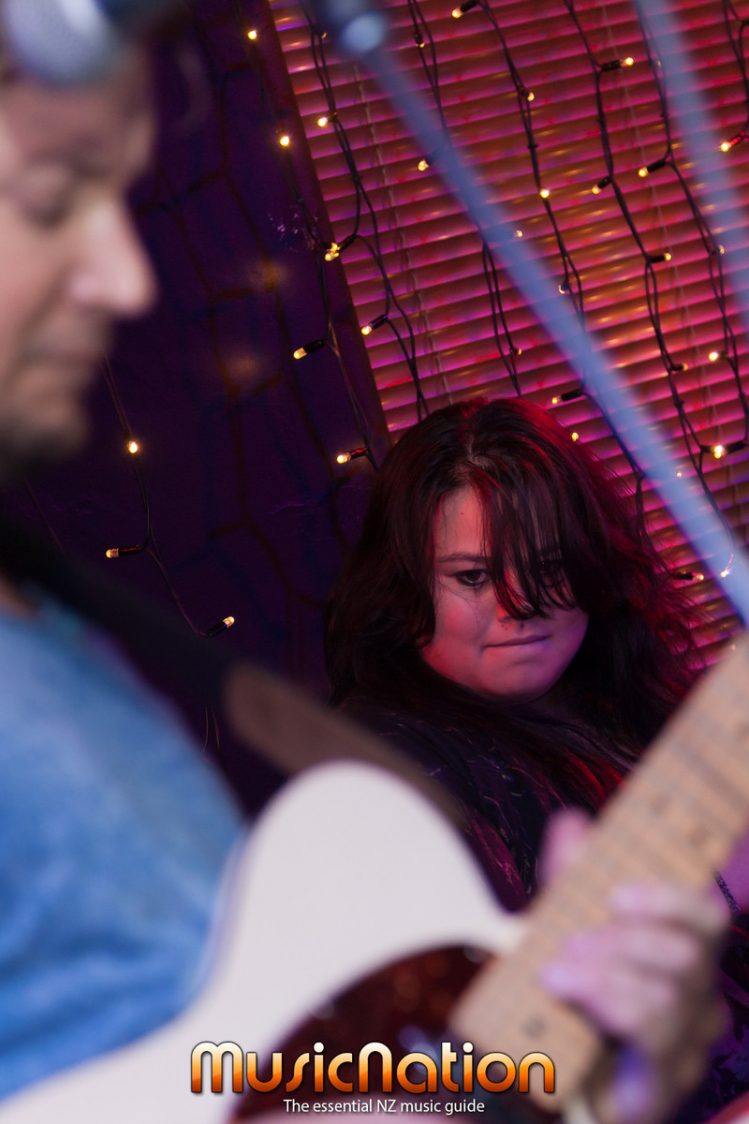 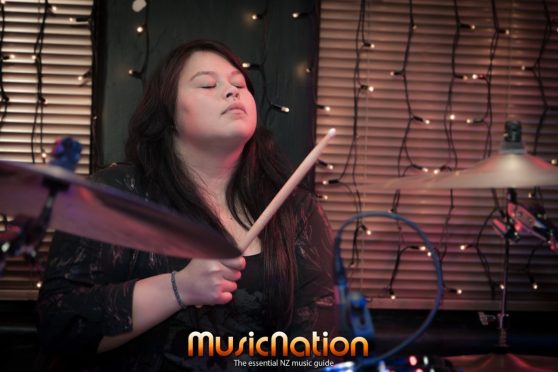 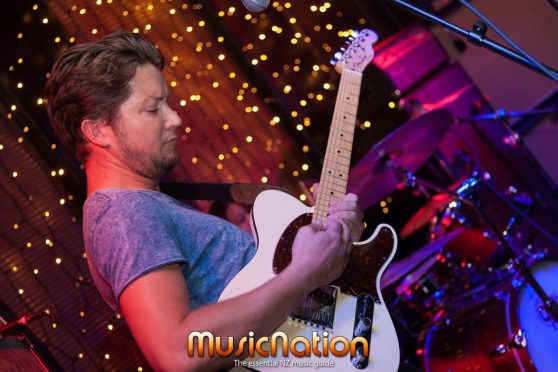 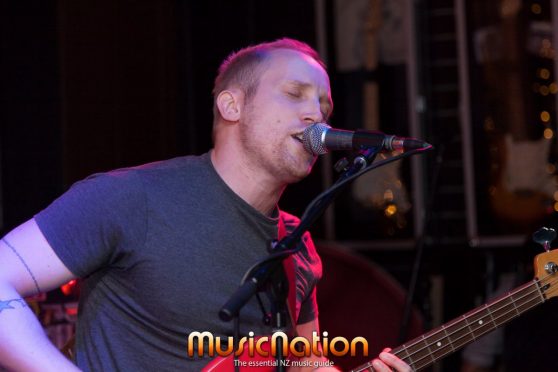 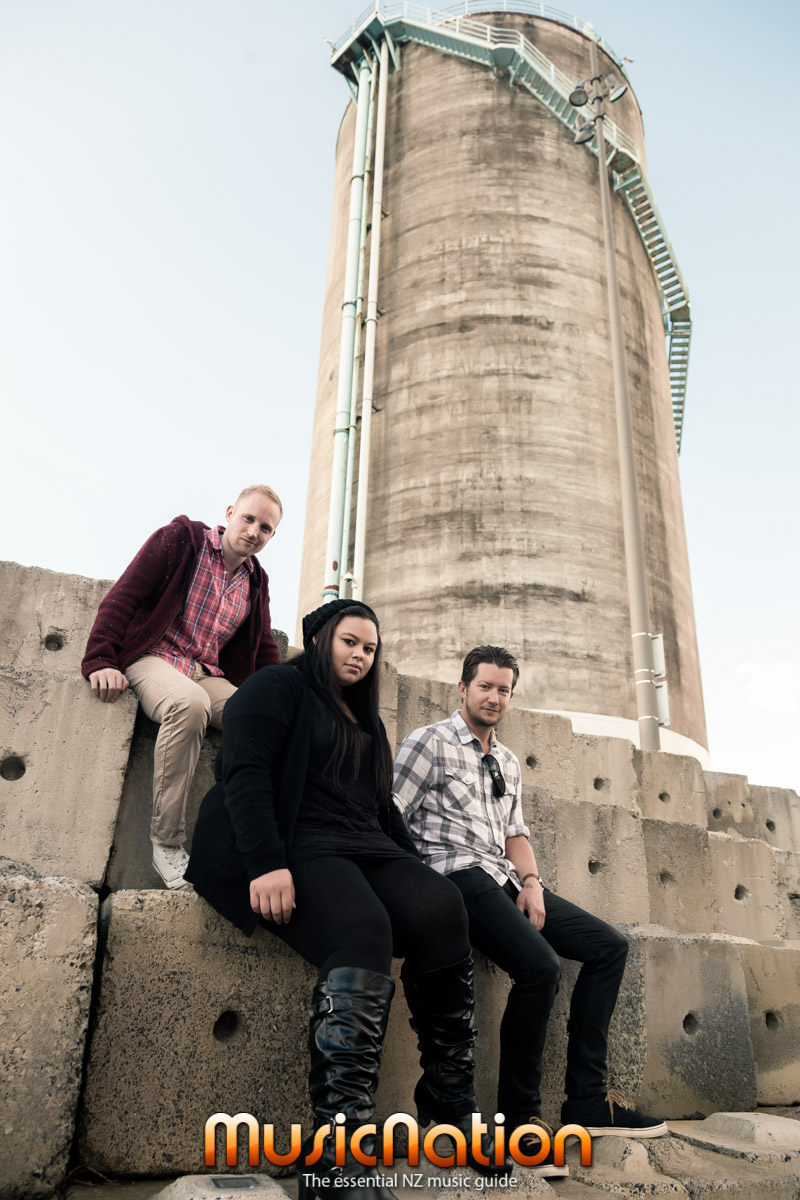 And now there is no stopping them. What started as an awesome idea has turned into reality with the band raising enough sponsorship to arrange an ambassadorial style tour of the UK in late September. Titled ‘Notes From Home‘, the tour will include 5 venues, and feature support from local band Bonnie and the Ooosh traveling with them. All of the proceeds are being donated to local schools 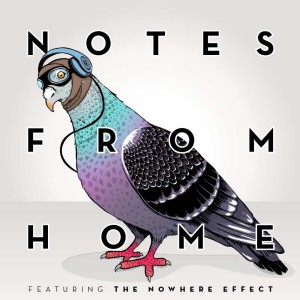 ‘I see this more as a chance to showcase independent Kiwi bands to ex-pats living in the UK,’ says Nathan.  ‘My brother is a brilliant entrepreneur and has really helped us arrange all the sponsorship and bookings.  We want this to become an annual thing too,’

The bands departs our shores September 21st, arriving to events at a whirlwind pace.  Their headline opening gig in London will be streamed live here on Music Nation, keep your eyes out for more info on that.

The ‘Notes From Home tour’ will undoubtedly show the Brits that music is indeed alive and well way down here in the colonies.  There is an exciting and bright future indeed for a group that can not only create diverse and well crafted music, but deliver it to the world on such a scale, all with a modest budget that would make most modest budget look like a kings ransom.

So how will The Nowhere Effect follow up all of this?  The current talk is an album, and if the EP is anything to go by, the wait is going to be excruciating.