PC: 32 & 64 bits VST and AAX for Windows Vista / Windows 7/ Windows 8/ Windows 10
(Note: PC AAX for PT 12 or higher)
Mac: 32 & 64 bits AU, VST and AAX, for OSX 10.6 or higher
Compatible with NI NKS system
Serial/license system with activation whilst registering the product
2nd serial for a secondary computer/laptop is available after you have registered the product’s original serial/license 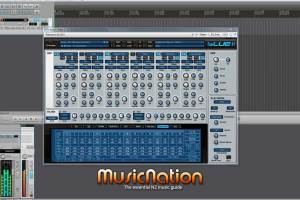 Blue-II is a PC/Mac instrument in 32- and 64-bit VSTi, AU and AAX formats. Titled ‘Cross-fusion synthesis’, and after a little Goggling, I found that’s Rob personal term for ‘it pretty much does everything’, and I think he has a good point.  A mix of FM subtractive synthesis with phase distortion and wave shaping – what you’ve got here is a pissed-off DX-7 on steroids….and things are going to get loud!

Just to further provoke the beast, Blue-II features a whopping 6 oscillators, 2 stereo filters with 27(!!) filter types, and a bunch of pretty nifty tricks like a step sequencer, arpeggiator, envelope generator and trippy XY pad. Four FX processors available with various routing capabilities and 35 FX types. Neat analogue features like drift and sub-oscillators are added. With around 2500 patches, Rob Papen is seriously holding nothing back here. 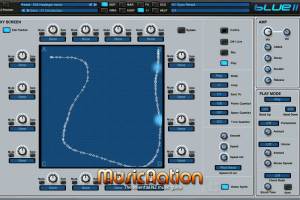 The XY Screen is worth the price of entry alone. Use it in vector mode or set up your own parameters, drawing paths on the screen for the oscillators to chase is not only fun, but intuitive and very musical. You can modulate oscillators with oscillators, and though the routing system is a little tricky to get the grasps of at first, its amazingly powerful. Once you get used to it, configuring patches is a breeze.

There is a mind-boggling number of oscillator samples to choose from – analogue, additive, spectral, wave samples and more – this is the all you can eat buffet you’ve been dreaming of.  I actually found a lot of the base oscillator samples were really useful raw with not processing applied, that’s always a good sign. There’s no life-like pianos or cellos here, but the strings and vox samples are great, even on their own. Its a bit of a bummer you can’t import your own WAV samples.

Blue-II is a behemoth beast that is a little daunting at first, but with some time spent with your nose in the manual most aspects becomes familiar fairly quickly. Anything boasting 6 oscillators you know is not only  going to be massive sounding, but complex to drive.  I’m not going to say Blue-II is a walk in the park, but as far as modular synthesis go, this not as steep a learning curve as I expected.  If you’re fresh to synthesizer music there are easier paths to take, but they won’t be nearly as much fun as this. 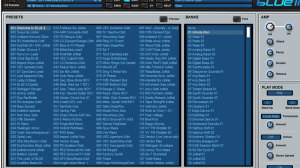 Rob Papen has created a welcome addition to the mega-synth market that fits nicely alongside the likes of Spectrasonics and Camel Audio. Blue-II, for me at least, feels more like a great collection of vintage FM synths bundled up with some really trick technology. While it can be a crazy psychopath if you let it, I think its appeal is more to sound designers wanting a classic synth tone more then wacky soundscapes.

Blue-II might possibly be too epic for its own good. The incredible amount of presets available means you spend more time auditioning sounds then creating your own from scratch. It seems a strange thing to be complaining about. Even the number of filters available to choose from makes you cross-eyed, and to be honest each offer only subtle differences.

Blue-II has the potential of being the only synth you will ever need, its just a matter of deciding if you have enough time (and brain power) to sit down and study all its finer points. Its all too tempting to just mindlessly click through the presets until something sticks, but then why would you bother getting a giant piece of kit like this when there are plenty of ROMPlers out there.

Since I’m a techno-geek, I’m happy as a pig in mud with Blue-II. Its pushing my synth knowledge and I’m learning new skills, and the rewards are well worth the efforts. The sound is top notch, as it should be from such heritage. It deserves to be up there with the big guns, lets hope it doesn’t crush itself under its own weight.