Hello and welcome to our hands-on review of Lumina by ProjectSAM.  You will be forgiven if you have not heard of ProjectSAM before, they are not well represented down here in New Zealand.  The Dutch-based company market to high-end industry producers with their range of top-notch sample libraries, being originally formed by composer Maarten Spruijt, songwriter Vincent Beijer and composer-arranger Marco Deegenaars back on 2001.

Lumina is the 3rd in the series of their flagship Symphobia orchestral sound libraries, and probably the most ambitious to date. Described as the ‘lighter’ of the series (in terms of sound timbre, not sound quality), Lumina is squarely targeted at sound designers, film, TV and game composers. 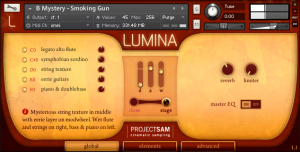 Lumina is a sample collection that runs from within Native Instrument’s Kontakt software (the free version works fine).  It features 6 groups of banks, each containing a number of presets that you must individually load up to play – anyone familiar with NI’s Kontakt workflow will work out Lumina pretty quickly.

Other banks include ‘Textures’ and ‘Textures Speed Control’, both being the same excellent collection of sound beds, the second being tempo stretchable, and according to the manual somewhat simplified samples, though we couldn’t detect any major difference.

Bank 5 are individual solo instruments, called ‘Legato Soloists’, but there are only 8 instruments in here. Its a shame you don’t get access to all the other amazing solo instruments because the ones they include here are absolutely breathtaking.

Finally, there are the very unusual ‘Dystopia’ banks, which is further broken down into ‘Guitopis’, ‘Percussive’, ‘Spheres’ and ‘Vintage Orchestra’ banks. This is a bit of a hit-and-miss collection of sounds can be best describes as weird. They are all ‘treated’ style effects taken from hitting, blowing, bending and playing instruments as they were never intended to be played. The results, while really interesting, are a little leftfield for anything other then the most avant-garde compositions. They do however work well when layered with other Lumina patches, or even other synths and sample libraries you might have in your collection (see below).

Out of the box

To start with, Lumina is a total snap to install and setup (if you don’t count the massive 42 gig download).  Everything installs and works perfectly, no issues at all. The patches load fairly quickly on our test machine (i7 920i 12gig RAM Win7), and Lumina preloads the immediate playable requirements of the patch while the slower, more time intensive samples load in the background allowing you to carry on working – nice touch.  Most patches load in under 5 seconds, some of the larger Stories and Textures banks take up to 25-30 seconds. The interface is simple and informative enough for you to find what you need, then pretty much forget once you establish the best settings. 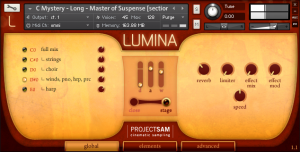 Its worth noting that Lumina has been recorded using three microphone positions in the studio – close spot mics, directly on the instruments, ambient mics – located were the conductor stands, and Wide – located far left and right of the orchestra. The sound variations you get are incredible, way more then simple reverb (which by the way is available as an extra effect over and above the mic settings).  The wide setting by itself is too much for my taste, but mixed with the ambient mics using the handy three-way mixer creates pleasing results on pretty much everything.  The included FX are very nice, the before mentioned reverb is a convolution type, and the EQ is set to premade bands, but very musical and high-quality sounding.  Of course over and above the included Lumina offerings you may run Kontakts built-in selection of high-end FX as well.

Luminia has an unusual architecture in that each note has many velocity layer samples, which is fairly common – however Lumina often comprises totally different instruments on these layers making some patches a little clumsy to use at first. And even more strange, key velocity is not necessarily velocity. Sometimes if you lightly blow on the keyboard you will get crescendos, and if you hammer the key you’ll get diminuendos. Using the mod wheel often brings in totally new instruments or even voices on top – all depending on how to attack the velocity – its takes some practise to learn the intricacies of each patch.  Its a very creative and expressive way to play the instrument, however some head-scratching is involved on a few patches (the cartoon banks being the worst offenders).

Most of the sounds gravitate toward ensembles making controlling Lumina largely a one-finger process.  The mod wheel generally handles intensity and key switches mainly tend to turn various instruments in the layer on and off – but each patch has slight differences to learn, so experimenting with your MIDI controller is required. 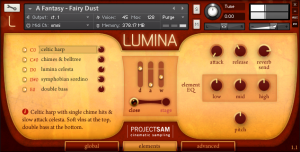 Lumina is a delicate instrument, you won’t find huge brass blasts or power marcato here – think Lord of the Rings soundtrack.  You do have the ability to load multiple instances of individual instruments of course within Kontakt, creating your own super-preset, and then you can start layering up Lumina with other Kontack instruments you have and creating much more powerful sounds if you need. We actually found loading up very electronic sounds (aka Alchemy, FM7 style stuff) created a really nice blend of organic and synthetic textures.  But generally speaking, we found Lumina to be at its best when creating light, whimsical soundscapes – absolutely perfect for film scoring.

The textures banks are the most fun to play with – and some truly awesome looped sections are here. Some of the supplied patches give you the impression of being on the set on an MGM movie sound-stage of old.  You could easily recreate your own Wizard of Oz soundtrack purely by using the textures banks alone.

There is no doubt Lumina is amazing for scoring film and TV projects, its really aimed at that industry. We tried using it for a simple pop song arrangement, and it really didn’t work at all. The samples are just too delicate to cut through a pop mix, and the velocity layering is just not setup for standard keyboard playing. However, as mentioned earlier, where we did find Lumina was outstanding is as a soundscape foundation when using other synths. For instance, Lumina with Camel Audio’s Alchemy running together as a super-pad was simply mind blowing. Getting creative with deley and reverb effects even further pushed the boundaries. Lumina is so very ‘human’ sounding and organic, we loved the contrast adding a synthetic instrument brought – obtaining Hans Zimmer style soundtrack epicness is within reach, if you have the extra synths in your arsenal.

The relatively small number of preset banks might initially lead you to think Lumina is a fairly basic rompler library, and even after playing through one or two you could be forgiven for thinking to yourself – is that it?!? But like a fine wine, it takes time to fully appreciate the subtleties of each of the banks.  Each of the story presets need your full focus and concentration to learn the articulations, key strokes and velocity feel to get the full effect of the designers intent. Instead of flicking through patch after patch like you would in another synth library, you need to open Lumina with the intent of learning one specific patch in a session, and just working on that till you have them all committed to memory. Also layering additional instances of Lumina or even other synths as mentioned earlier will totally open up incredible new worlds of sonic opportunities.

At a few dollars shy of $1000NZD, this is no casual purchase, but it is excellent value for money if you can utilize all of the banks and textures included.  The decision to include cartoon instruments with the more traditional orchestral sounds (or depending on how you look at it, orchestral sounds with the cartoon instruments) is perhaps a little off-putting to some producers who have no intention of ever creating game, animation or children’s scores – one third of the plugin might be interesting, but not entirely useful in your work. Swapping out the cartoon instruments for some harder hitting ensembles and creating a totally separate dedicated package for game and animation producers might have worked better for some people, consider the cost of Lumina.

We love how Lumina removes all the tedious work of scoring individual instrument and just presents you with a very well balanced and usable collection of ready to go orchestras in-a-box.  When there is no budget to do all that time consuming scoring, and all you want to do it just follow the action on screen while having a full orchestra at your finger-tips, this is exactly what you want.

Price wise its out of the reach of most bedroom producers, but if are in the business of creating film or TV scores, Lumina is an investment that will easily pay for itself one-thirdtime.  If you have been considering an orchestral sample library but have been put off by the complexity of some of the big names like Vienna, EastWest or even Native Instruments own orchestral library, Lumina might just be the ticket for you.  Lumina, even with (or with thanks to) its quirks, allows you the freedom to create immense orchestrations and soundstages simply and quickly – always inspiring and absolutely breathtaking.