This week we received something a little different across the desk here at the Music Nation studios – Orchestral Toolbox, a virtual orchestral arranging tutorial DVD series by German company Audio -Workshop. As a fan of on-line education, I immediately put my hand up to nab this review.

Admittedly at first I was apprehensive about the 11-hours course – being more of a ‘1 hour then you’ve lost me’ kinda guy. The thought of having to plough through so much content didn’t inspire me from the get go, but this is the first time I have seen such an orchestral-focused tutorial that I was excited to explore.

Who is this series for? 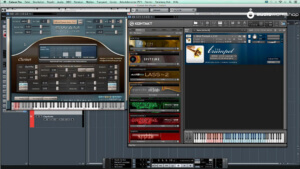 On a basic level, pretty much anyone interested in using the computer to create music using predominantly classical instruments, though much of the training can be applied to all forms of sequencing.  Anyone in the film, TV and game scoring industry will absolutely benefit from owning this collection, as would producers looking to up their game with pop, hip-hop and rock orchestral arrangements.

While there is no musical snobbery going on here, the course features much about modern music production, budding producers out there will struggle getting the most out of this if you don’t have a solid grasp of DAW sequencing basics and fairly good piano and music theory skills.

Achim Brochhausen is a professionally trained musician (piano and violin), music producer and composer. His area of expertise is the realisation of orchestral music within the computer. Achim also works as a music teacher, live musician and author as well as a producer for many well-known artists.
Holger Steinbrink has many years experience as a certified instructor. He is also a media producer, sound designer and music technology writer and has been producing music with computers since the 1980’s.

By basic, I mean you’re skilled enough to use your DAW’s MIDI sequencer well, and you own a MIDI compatible keyboard that you can play more than Chop Sticks on. You don’t need to be a road-hardened concert pianist, but there are no training wheels here after the basic introduction, you’re thrown right into the deep end and you’ll need to know the basics to keep up. If you’re already a seasoned composer or producer who wants to knuckle down and really hone your advanced arranging skills, this has your name written all over it. 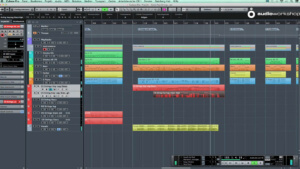 If you’re coming from a traditional background and are looking to expand into the computer world for writing and composing work, this is an ideal primer course for you. The technical jargon is explained very well with plenty of advice on required hardware and options for buying good starting software instruments.

I don’t call myself a veteran arranger, and though I can read simplistic music, I do have a strong orchestral background having played in nearly 120 musical theatre shows over my career – I understand the basics of how an orchestra is arranged, what the instruments sounds like and how to incorporate them into compositions, plus I have a strong background in DAW recording and sequencing – I felt comfortable with the lesson balance and progression.  I will need to go back through much of it a few more times as there is too much to take in with only one viewing, but there is no doubt I have increased my proficiency in this area a lot already.

WHAT’S ON THE DISC?

There are two main sections in the tutorial, Basics, and Hands on Working, plus a third titled Additional Content that goes further outside the realms of the lessons into mixing, mastering and purchasing recommendations.  In total 59 lessons are included covering pretty much everything from software libraries, key switching, and effects through to ostinati arrangements and lyrical patterns. Weaved throughout the lessons are tips and tricks and other neat little nuggets of advice worth writing down. 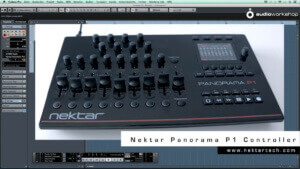 The basics section covers your MIDI hardware, velocity and expressions, templates and a fair amount of information on Native Instruments Kontakt player. Hands On Working is where you’ll get the meat of the lessons. Some of the topics can get fairly deep, such as Ostinati patterns, articulations for different instruments, composition examples and useful examples on incorporating pop, soul and funk music into arrangements. There also great advice on buying virtual instruments and some MIDI hardware in addition to your basic setups.

There is no doubt that if you take your time, really study and put into practise the lessons here you will become very accomplished in your field.

Orchestral Toolbox is targeted squarely at people who already possess the skill sets to write and arrange music and just need a solid tutorial on expanding their skills with the PC DAW. Though, as mentioned, a novice might struggle with most topics past the basics introduction, it’s not to say this not beneficial for them – in fact, novice producers willing to invest the time stand to gain the most from this video series if they can upskill and keep pace.

The lessons are nicely divided up into bite-size chunks. Production value is excellent, being filmed in 1920×1080 HD with excellent overdubbing in English, it looks professional and very well done.

Criticisms? Well, not much as I’m really gobbling this up. It would be nice if they featured other DAWs like Cakewalk, Logic or our platform of choice Reaper, but Audio-Workshop is a Steinberg certified trainer, so it’s only natural they use Cubase exclusively.

Unfortunately it’s the only title from Audio-Workshop translated to English so far, but hopefully, more from their library will become available as they all look excellent.

Very inspiring stuff, and at $99, an absolute steal.

Orchestral Toolbox – Pushing the Boundaries was last modified: May 23rd, 2018 by Jacko Andrews