Hi and welcome to StudioWise. This week we’re looking at Momentum, a library for Kontakt based around a clever interface with advanced arrangement controls and a massive loop library – sounds exactly like my cup of tea.

Impact Soundworks is well known for producing some really innovative audio libraries based on the Kontakt platform, having reviewed a few now, I look forward to anything new coming from them into the office.

After reading the press release for Momentum I just presumed this was another sound design percussion library, but looking through the sample list and maybe this is not your average epic cinematic affair. The loops appear to be quite varied, from simple metal hits, through to washing machines, computer keyboards and the plinky string section on the headstock of an electric guitar.

This all sounds very intriguing, let’s get it installed and fired up.

Momentum is a huge sample library consisting of over 2500 loops and one-shot recordings, all percussion focused using a wide range of surfaces, strings and household objects. This might sound a lot, but in reality, there is more like around 120 unique percussion objects sampled, each with 8 or 10 performance variations. 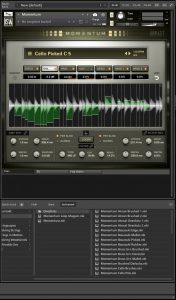 The basic idea is you choose from a selection of included loops, which once loaded you can playback from your MIDI keyboard. A mapped section is marked in blue on the screen, which represents each of the sliced zones in the loop, and holding down a note in the blue region plays the loop from that point. Furthermore, green keys allow you to pitch the loop up or down a half step each, effectively giving you 7 semitone up or down. Finally, there is a selection of performance effects marked in red on the keyboard that allows things like reverse, stutter and randomise.

The keyboard mapping, unfortunately, is often outside the scope of a normal 88-note keyboard, so it easier to assigning MIDI CC to articulations if you have an additional controller, like a drum pad for instance. If not, you’ll have to mouse-click them. 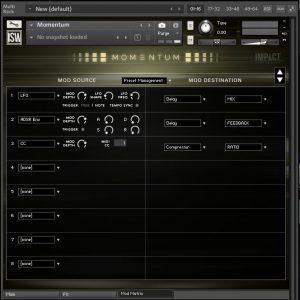 Each of the slices can be individually pitched, panned, amplified or modded using the complex mod matrix.  You can’t, unfortunately, skip a slice or rearrange them from within the instrument. Also, a drawn response curve with edit points might have been a better option as opposed to one by one dragging slice levels up or down.

The slick interface is dead easy to navigate, and after only short time (and maybe a watch through Andrew Aversa’s Excellent tutorial video) you’ll be away. 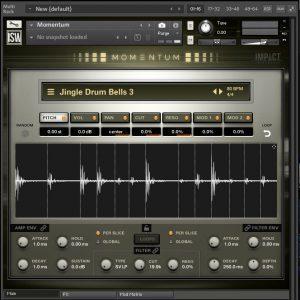 My most immediate comment is on the sound, is how raw and close mixed the recordings sound. Though there are plenty of effect options, everything is loaded dry. This suits me as I prefer to start dry and add FX later, but it does require a little imagination as to how the loops can be used. The samples aren’t overly clean sounding either, some with quite high noise floors.  It doesn’t worry me too much as it adds to the feel, but there is a distinct ‘recorded on-location’ sound to many loops.

The next really obvious observation was how close the entire library is to Propellerheads Dr.OctoRex. There are one of two major differences, but on the whole – if you know Reason, then you’ll be right at home here with Momentum. Momentum can only play one loop at a time, Dr.OctoRex can do eight. Momentum has much better, more focused loop library, Dr.OctoRex has an immense REX loop catalogue and community providing continuous content.

For me, the a-hah moment came when I exported a loop to the DAW and started mucking with the slices – which is exactly the same thing Reason does, and why REX editing is so damn awesome.  When you drag and drop a loop from Momentum into your DAW (via a tiny little icon you will miss unless told where it is), Momentum spits out the MIDI map from the blue section of Kontakts keyboard (which is mostly mapped to each of the loop cut points). You get a REX-type step arrangements Reason users will be very familiar with, and you’re free to start moving notes, or slices, around as you please. In this way, the original loop file really is the tip of the iceberg.

Not only can you come up with some really creative grooves in no time, but routing FX signals and layering other percussive VSTi libraries adds pretty much limitless scope for new ideas. While you could use MIDI to process panning, level and all that stuff, the Momentum interface is much better for doing the core modulation arranging. As a quick example, I exported a percussion groove MIDI to my DAW, duplicated and quantised it quite stringently to 8th notes, then applied a Spitfire Audio staccato orchestral ostinato vamp – instant action sequence. Very cool stuff. 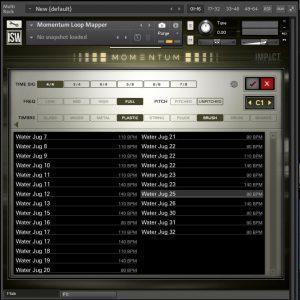 With the supplied loops and clever sample player it quite easy to come up with some underscore grooves that would be ideal for theatrical trailers, action sequences or pretty much any sound design application.  As a production tool for pop music, there’s some scope for exporting loop MIDI maps that can be utilised in arrangements, but the loop sources being organic natural instruments, this wouldn’t be the main reason for buying this library.

The loop browser system is adequate but could use a few more filtering choices, and unfortunately, you can’t import your own wav files for slice processing. An included Loop Mapper allows you to compile your own collection of loops that will play as long as you hold a key down, plus of course all the filtering and FX as with the main interface. 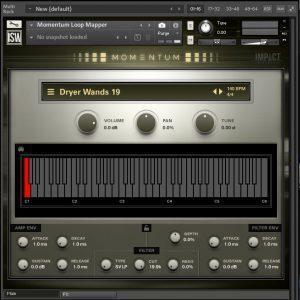 Finally, you can load a selection of one-shot loops that can be played across your keyboard like instruments. Mostly these sound ok as one-shots, not so much as instruments due to the pitching engine making most things sound quite unrealistic and robotic. However, it does allow polyphonic chord patterns, which is handy, though you will need to increase the voice-count to over 100+ if you want longer length samples to ring out.

I’m not crazy about the built-in FX, they are your basic Kontakt selection. They work for sketching ideas out, but you’ll want to look at 3rd party processing for anything interesting.

Performance is pretty good, only a hint of lag when running through the presets quickly. This is a Kontakt instrument, so you’ll need some fairly hefty PC power to run it comfortably, but certainly no more than the minimum specs. Weighing in at around 8GB, it’s not going to chew up much drive space either, so any fairly modern PC should be good to go with this library. 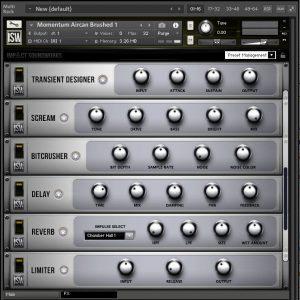 At $149, plus $399 for Kontakt this is a massive ask, considering you can buy the complete Reason DAW for less and get many more REX loops included.

If, however, you own Kontakt 5 already then the spend is quite reasonable, especially if you’re not using Reason at all and would like a REX-editing type sound design tool, I would say this is a great deal and by far the best alternative. At this price, and considering the limited source material, this is a library that will suffer for not being free-Kontakt licensed.

The similarities with DrOctoRex are obvious, but Momentum has a bunch of unique functions, such as independent one-shot slice filtering, better mod matrix and easier workflow. It cannot compete on content, even though the included 2500 odd samples are excellent, DrOctoRex has almost limitless REX file communities supporting the platform.

I wasn’t that taken by Momentum at first, but it’s grown on me quite a lot, mostly thanks to the excellent drag and drop MIDI export, and consequent remapping of loops via MIDI. Though this will require more time and thought to expand loops to full-on arrangements in your DAW, as a production tool, this is perfect for cinematic arrangements, film trailers, modern scores etc.

It’s a shame you can’t change the slice length, position or skip from the sequence. Even though you can do much with the exported MIDI map in your DAW, being able to quantise slices or even import your own MIDI grooves would expand Momentums flexibility a lot.

There is an absolute tidal wave of sound design Kontakt instruments coming out recently, so Momentum might have trouble cutting through the noise to show off its potential. It’s capable of very complex arrangments and grooves, but mostly it excels at simple, down to earth and usable every-day loops. As opposed to the more out-there libraries available, Momentum could easily be your default go-to library for percussive underscores simply because it’s not too wacky.