Hello and welcome back to StudioWise, this week we are looking a the amazing Cinematic Keys sample library by New York based developer Sample Logic. 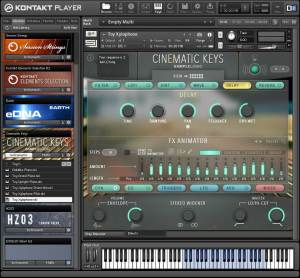 So what is Cinematic Keys then? If you are looking for a true to life Steinway grand piano recreation, you’ve come to the wrong party my friend. The best way to describe this instrument is it makes movie style epic sounds from keyboards – and not necessarily from actually playingkeyboards.

For instance, they take an average sounding piano and strum its strings on the inside, then whack it with an axe, and then a sledge hammer and finally a blowtorch – all smothered it with a massive reverb and some crazy LFO – and that would be a fairly typical patch in Cinematic Keys.

If you are a fan of avant-garde black and white movies, where there is lots of staring and suspenseful weird background music – this is the instrument you need.

So perhaps the target market for Cinematic Keys is a little ‘out there’, but there is no reason you can’t use it for other, more mainstream genres. If you’re getting bored with your current sound set, or perhaps searching for a brand new sound, you are in for a treat.

Sample Logic have gone way beyond standard sample libraries by providing what is essentially a full synth engine on top – what they call hybrid sound design, allowing you to create bizarre and interesting creations.  If you had to pigeon hole Cinematic Keys into a category, I would guess it could be called an atmospheric pad synth, which is where is definitely shines. But there is a lot more to this instrument then just pad sounds, way more indeed. 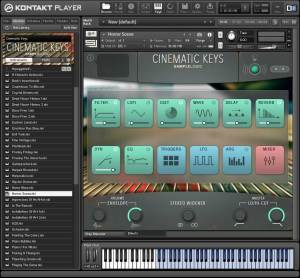 Cinematic Keys is designed for use in Native Instruments Kontakt, though you only need the free player version fortunately.  Once you get it downloaded and installed, Cinematic Keys appears in your list of instruments like anything else you have, you simply drag and drop banks over to the right and start playing.  Since Kontakt is more like a mini-studio in a box, it is perfect for instruments like Cinematic Keys as loading up multiple instances is a breeze – why not mix and match with other 3rd party Kontakt instruments you have to make a super-patch. You can then apply master FX to all your loaded instruments at once, a neat system.

Cinematic Keys is separated into two main sections – Instruments and Multis. The instruments section contains three categories Atmospheres, Instrumentals and Percussives. Each of those categories is further broken down into sub-categories containing patches. Very basically, Cinematic Keys is a rompler, meaning you are provided the pre-made samples to play with as you like, but you can’t get access to the raw WAV data or anything like that. The multi’s are a collection of various instrument patches designed to show off the full potential of the instrument, and of course you can make up your own multi preset super-patches as you like. The instruments as mentioned aren’t raw samples, but pre-made individual patches designed to be use in conjunction with each other.

The most noticeable thing when you load a Instrument is each patch has a 12-way set of coloured tiles, each representing an effect processor that can be applied to the sound. The effects themselves are fairly plan (Filter, LoFi, Distortion, Delay, EQ etc), but the first five effect processors have access to an FX Animator, a graphical automation effect that will totally transform a possibly dull patch into something interesting and expressive.  The results you can get are outstanding and is capable of totally transforming your sounds. Its a shame the FX Animator doesn’t extend out to all the FX processors, like the compressor and EQ – I think you could get some really interesting results animating them as well. The developers explained this was a trade-off to conserve CPU demands, and considering the limited benefits this would bring to the sound, we understand the decision.

By default all of the tiles are closed and you only get access to the major mix control slider for each effect and the on/off button – you could call this ‘simple mode’ I guess. If you click on a title you are presented with all of the editing controls to modify the processor. There seems to be some problem with enabling or disabling an effect tile, I need to click and hold for a second or so for this to work.  The effects are easy to figure out and before long you’re coming up with creative and interesting noises just by mucking around with the dials and button, all easy stuff.

Multi’s are massive, multi-layered banks that are largely one-finger operated loops, though some pretty epic walls of sound can be achieved by playing chords. The are tempo sync’d to you DAW allowing you to quite literally create one note soundscapes.  Creating your own multi is a snap by simply layering up individual instruments till your hearts content (or your PC blows up).

The effects are pretty basic but do the job well, though I wasn’t a fan of the distortion – the built in saturation is just too digital sounding for my taste.  The Wave section is really cool, allowing to to overlay a synth wave oscillator (such as a Saw, sine or pulse wave). The only problem is the detune knob is not real-time, so you can’t use it to sweep, which is a little annoying. 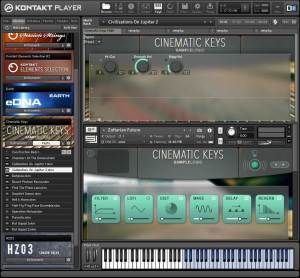 The reverb is great, offering both digital and convolution options. The digital version is quite nasty, in an ‘Alesis MIDIVerb’ kinda way, but it works really well within the overall design of the instrument. The convolutions are excellent and its good you can alternate between the two options. There is also and option to reverse the convolution reverb, giving you some really nice spooky effects. The convolution samples Sample Logic have used here are top-notch and all sit beautifully with everything you apply it to.

I liked the trigger pads, its a neat way of apply preset effects by hitting triggers – kinda like what you would do with NI Maschine.  Theres a bunch of cool presets to choose from and you can really get some nifty, on the fly creative effects – great for using Cinematic Keys life too I’m sure. The down side is there is no way to see what exactly you are doing, its pretty much a case of  committing them to memory. I don’t have a big problem with that, as I think the intent here is to introduce more creative experimentation.  Unfortunately you can’t create your own trigger presets either.

The ‘Arpeggigator’ (no, not a typo) is a very interesting way to add even more movement to patch sounds. Its basically a step sequencer that apply presets chosen in the trigger effect mentioned earlier, and the LFO section. So fo instance, you can set up a nice LFO and weird EQ patch on the triggers, which the Arpeggigator will apply at defined steps in the sequence. I found in general best to play with the random feature for some interesting results, and Im sure once you’re more familiar with the sounds you can generate from the trigger section and LFO, you could start making up some wild and crazy effects here.

There is a handy metronome built in for helping you with patches that have not distinctive rhythm.

So a bit of a mixed bag with the effects, and a couple of irks in the basic design, but overall the layout works well and your patches sound pretty amazing with even a subtle amount of effect applied.  The instrument patches on their own tend to sound a little flat and lo-fi, but the real magic is in the layering – and wow, Cinematic Keys will simply blow your mind once you start  creating your own multi-layered monster patches.

So, how does it sound then?

While you won’t find hyper-expensive sounding instruments here, Cinematic Keys is more about the sounds you get destroying, or at least ‘effecting’ instruments into oblivion. The main piano sound is a little thin to me when used by itself, and its certainly not the most expressive piano I’ve ever played. But when used as designed, lavishly smothered in effects and filters everything just sits well and sounds perfect.  The really clever thing about Cinematic Keys is you cannot make a bad sounding patch, and almost always adding effects and layered instruments sounds better, more dramatic and interesting – it really comes down to how much ‘wow’ factor you’re looking for in your patch.

Even though only 44.1k, all of the recorded samples are excellent, and some are outstanding. Any grain from the lack of sample resolution adds to the overall organic nature of the instrument.  Everything in the percussives section is brilliant, and the toy xylophone stood out to me for some reason – its so simple and childlike, yet resonates though effect layers and other instruments. 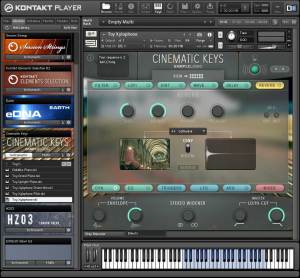 Part piano synth, part Foley library, Cinematic Keys is a absolutely suited to the role of sound effects, soundscapes and incidental film music. There is just so much here it makes you head spin, and with Kontakt’s ability to layer multi-instances of the instrument, or even other instruments in your collection, you will literally never run out of truly amazing and interesting sounds to call on. From the moment you first play Cinematic Keys you will be captivated by its quality and scope, and now even days after starting this review I am still in awe of how deep you can go in the weird and wonderful world of keyboard destruction.

Operating Cinematic Keys is very experimental and its unlikely you’ll come out with the sound you have in your head when using it as there are too many choices to make, each taking you down a totally new sonic road every time you start playing, but this is by far the most innovated uses of sampled recording I have seen so far.

At $450 odd NZD it might seem a little steep, but trust me this is outstanding value.  Cinematic Keys might not allow you to load up your own samples, and you’re limited to using the preset instruments that come factory, but coupling with other instruments from Kontakts extensive library will quite literally never run out of fresh ideas and inspiration.  Sample Logic also has Cinematic Guitars 2 in their product line-up, and though we haven’t tested it yet, by all accounts it a similar kind of thing if you find the piano sounds here not to your requirements.

Overall Cinematic Keys is an excellent instrument, though more so as an effect then an actual keyboard instrument. It will do pianos, organs and the likes – but there are plenty of better options out there if that’s what you’re really looking for.  There is an absolute mountain of presets which is great, though you will need to spend some time feeling your way around and getting used to the layout you will be rewarded for your perseverance. If you’ve been eyeing up your grandma’s piano wondering what that would sound like if you took to it with an axe, wonder no more – Cinematic Keys has done all the hard work for you.