Most folks in the Northern Hemisphere hear ‘New Zealand’ and think of beautiful rolling hills, rocks jutting out of the sea, or maybe Peter Jackson’s epic Lord of the Rings. But Auckland hip-­‐hop rock trio The Wyld makes the case that innovative, forward-­‐thinking music should be on that list, too.

The history of the union between rock and hip-­‐hop is muddied at best; with at least as much crap as worthwhile material released since Run DMC collaborated with Aerosmith and launched a thousand imitators. But it would be wrong to write the fusion off – it has produced its share of legendary material, from the Beastie Boys to Rage Against the Machine, from N.E.R.D. to Andre 3000’s late-­‐period output. Over the last twenty-­‐five years, incredible ideas have come out of the dialogue between hip-­‐hop and indie rock. 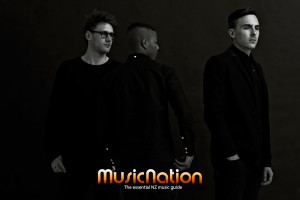 That innovativeness, that lust to explore – that’s the kind of tradition The Wyld are drawing on. Not the stale formula of a rock beat + rapping, but the ingenuity and awesomeness that results when musicians of different stripes put their heads together to create something powerful and singular.

Since their formation, The Wyld have attracted a flurry of attention, drawing international interest from music blogs such as Pigeons & Planes, MTV Iggy and Cassette Couture. It’s all happened quite quickly for the trio, who only started working together in 2010.

Kiwi guitarist/producer Joe Pascoe had been kicking around ideas with Sudanese poet-­‐turned-­‐rapper Mo Kheir at university, bonding over their love of architecture, design, and classic tunes. When American singer/producer Brandon Black entered the picture, everything clicked.

In the time since, they’ve built their original sound into something truly impressive, fusing the vocal intimacy of Bon Iver with the power of the The Black Keys and a post-­‐Kanye swagger. Combined with a healthy dose of soundtrack cinematics, their music sounds firmly future-­‐oriented. Sonically dense and beautifully expansive, it is both of-­‐the-­‐moment and ahead of its time. Mo’s rapping is versatile, often hilarious, and always on-­‐point, and unlike a lot of rappers trying this kind of thing, these guys can actually sing, and they know just how to balance their various influences.

So it’s not a question of if The Wyld will break out, but when. The band has already made waves in New Zealand.