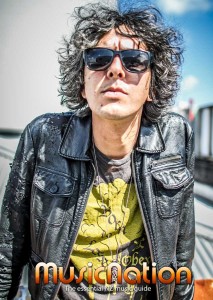 Formerly of London 3-piece Siren, cult psych-rockers The Quick and the Dead, and Auckland live dynamo Bearhat, Will is now performing solo as Will Saunders & The Lowest Fidelity.

2014 sees the release of his sophomore self-produced solo album ‘Love Is For Others‘ – released Feb 14th 2014.  The first single ‘SPD Blues‘ is available as a free Bandcamp download with ‘Bug‘ – both from ‘Love is for Others’.

This album sees a more propulsive and immediate sound than previous releases, with the production taking the form of full instrumentation, while the lyrical imagery and wordplay remain as disturbingly alienesque as ever.

Will is currently rehearsing with his band The Lowest Fidelity featuring members of acclaimed Auckland band The Situations, with live dates due in 2014, as well as playing solo acoustic shows around Auckland and the North Island

The spaces between the brain and skull, and the mind and heart. Hubris. The imagined existence of the living or struggling, and the memory of those not yet aware that they are alive.  Popping. Buzzing. Spacious yet affordable. Would suit like-minded individual or near offer.

Before the Covid-19 Pandemic, • KITA • were planning a music video shoot for their upcoming single TRY TO FIND A WAY when the World went into lockdown. Their song travelled around the planet collecting private video moments from friends and fans during their own COVID-19 Lockdown's and has...

8FORTY8 ARE THRILLED TO ANNOUNCE THEIR NEW SINGLE LEFT IN TIME