UVI Falcon – The Cool New Kid On The block

By far the most ambitious offering from French developer UVI, Falcon looks to take on Native Instruments Kontakt head on. 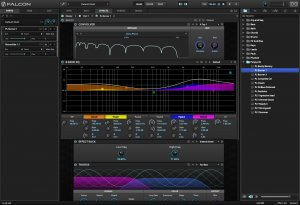 UVI might not be a familiar as other workstation titles on the market such as Kontakt, Reason or Sampletank but it works along similar principles, being a sandbox program with expandable DLC to purchase separately. 3rd party developers can create extensions much like the others, so time will tell who will start jumping into the UVI platform. Currently, only one expansion is available from UVI, called Spectre, this further pushes the sound design capabilities of Falcon with 140 extra contemporary electronica sounds.

The main difference is Falcon is primarily a synthesizer with library expansion capabilities, not a library host like the other platforms. It has pretty much every form of synthesis available (Wavetable, FM, phase, hybrid etc etc….), plus you can load up UVI sample libraries and layer them in. If you’re a Kontakt user, think of it like Massive on steroids with the ability to load in nki libraries as samples.

Brilliant interface, fresh and really well laid out – everything you need is on hand immediately and just makes sense.  Left side shows your part lists, or loaded patch controls, with the right reserved for patches and FX. The large centre section houses the main controls and editable parameters. Like Kontakt, you can load up and layer multiple patches across your entire UVI collection to create a huge wall of sound patches easily.

Everything looks slick and modern, and though newbies will need some time get the grips of the interface, experienced synthaholics will leap straight in. Falcon is a joy to navigate mostly, though the odd little irk annoys me, like accidentally double-clicking a soundbank title converts the browser window to a text search window, requiring double-clicking the root directory ‘/’ button to exit – something that took me ages to figure out when I first did it.

If you’ve been collecting UVI Workstation titles over the years, Falcon basically becomes your new front-end, with all your old UVI Workstation *.ufs files simply dropping in the libraries folder and then just show up in the program, as do any new expansions you buy.
In use. Simple. 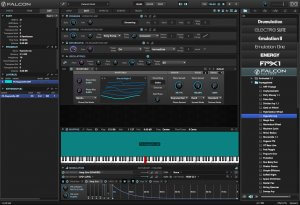 Falcon can be very deep and complicated if that is what you’re looking for. Diving in deeper reveals Falcons program hierarchy is laid out similar to what a hardware synth might be. A top level multi contains parts, each of which contain program, layers and key groups, of which you can insert effects and modulators on any stage. It makes sense when you’re looking at it, but can quickly become a headscratcher if you’re not careful with your planning. You can see a visual guide of your hierarchy by choosing the ‘Tree’ view, which for me at first just made my brain go numb.

For the egg-heads, a Lua script editor is included for coding your own patches.

The 17 pairs of outputs and mixer mean Falcon is, in essence, a min-DAW for your synths and sample libraries.

Falcon is a serious piece of kit that requires a slow and methodical approach to learning. If, like me during the early sessions for this review, you dive in beyond loading preset patches, its very easy to be overwhelmed and lost. Even now I still feel like I’m trying to fly the USS Enterprise, but it’s slowly sinking in and most of the rudimentary controls are quick for me to find and control.

Falcon is easily compared to Kontakt and Reason due to its sandbox style structure. All three are designed to work with expansions, though Falcon is the only one that at its heart is a synthesizer. 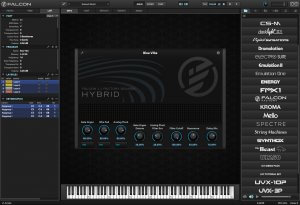 It’s a little unfair comparing Falcon to Kontakts factory soundbanks, as they are pretty much a joke. Of the box Falcon simply wipes the floor with Kontakt. Kontakt relies on solid 3rd party expansion, no so with Falcon.

Propellerheads do have a few benefits over Falcon, mainly due to Reason being a total stand-alone DAW. The song arrangement and external MIDI control are features Falcon can’t touch, however, UVI offer an insane amount of historic modelled synths in its catalog, and of course its VST, so you can work with all your other VST effects and instruments. You would spend many hours patching and routing devices in Reason to get a great sound Falcon users can just simply drag and drop in.

The mixer section is a little tricky to work out without watching a tutorial video, but once you get your head around its very powerful and equally as good as any DAW environment. Unless you’re working with recorded material, there’s very little reason to leave Falcon for any post mixing of FX. The number of included effects is a little overkill, but you can route the audio channels directly out to your DAW for using other effects if that’s what you need.

Loading samples is a breeze too. Basically, use the browser to find your samples then drag and drop them onto the keyboard where you would like them to be triggered.

I’m certainly no Falcon super-user yet, preferring to layer up preset patches and muck with a few filers and oscillators. As a user of UVI’s incredible Vintage synth Vault, Falcon is an awesome upgrade to the UVI Workstation software opening up a world of possibilities. I find layering old-school synths like my Fairlight (Darklight IIX) with ultra modern Spectre presets sound simply mindblowing. I like this approach as I understand how the old synths work, laying over modern sounds mainly as a sparkly shimmer. 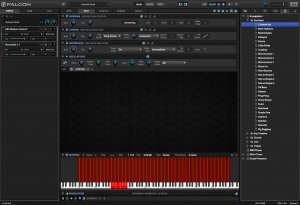 I’m still mostly hit-and-miss creating sounds. By that I mean creating a ‘sound’ is easy, creating sounds I want is tricky. Falcons basic design beckons you to get the spanners out and open up the hood. It would be unfair not to get in behind the scenes and play, you might as well buy Kontakt if you want just a sample player.

It’s a vast, monster of a program that has been laid out as well as could be expected. Certainly, a steep hill to climb at first once you step outside the collection of presets and start making your own multis.

I do love a challenge, but you are going to need to set aside a good few weeks to get the feel of Falcon before you can start getting creative – else you’ll be frustrated trying to do simplistic functions while pouring over manuals and many YouTube help videos.  Following along with one of the official help tutorial videos is a lot like driving a race car for the first time – you feel you’re in control for a bit and start to relax, then woah stop stop stop, I’m out of control….crash! Rewind, try again.

I love this platform, even though it makes me cross-eyed if I dig too deep. I feel there is nothing I can’t create if I try hard enough. The seamless integration of UVI sample libraries with the core synth truly leads to wondrous results. You’re not left out in the dark like Reason, as Falcon acts like a simple instrument plugin in your DAW, allowing mixing with your other VST instruments and effects. As with all synths, experimentation is required to create unique sounds, I feel the structure of Falcon means you really need to know the interface well before you jump in, leading you to more purpose made patches, not just random ‘no idea how I did it, but I like it’ results.

To become a master of Falcon would mean you have mastered all synths, and if you’re like me looking for that one instrument I can really knuckle down with and learn, this would be it.

UVI Falcon is intimidating, sure, but with all important things in life, time spent brings great rewards.