UVI Cinematic Shades – The Dark Side of the Moon

If you’re new to the Falcon logos, it is a sandbox style container for compatible UFS sound libraries, much like Native Instrument’s Kontakt. Falcon provides the foundations for sound libraries to build on, providing FX, synthesis, MIDI utilities, arpeggiators and the like. Most importantly it lets you layer and mix libraries to your heart’s desire (or, your PC’s CPU limitations of course), each layer containing its own set of modulators, FX, oscillators, you name it. The Falcon-specific expansions, such as Cinematic Shades, draw on the advanced capabilities of the platform, allowing you to really push the boundaries. Check our full review of Falcon right here for more information.

Presuming you already have Falcon setup, installing a new expansion is a very straightforward process involving downloading and moving a single UFS file you drop it into your designated UVI folder. Once you’re through the authorization you can freely move the UFS file around your PC as you need, as long as you tell Falcon where it lives.

It’s a neat system allowing you to delete unused UFS files if you’re not needing it for a while to save HD space, then later simply drop it back in when you have a project to use it on. 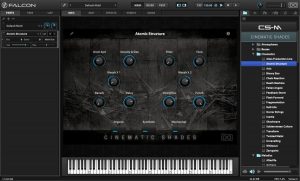 The online manual only contains rudimentary information, much of the meat of programming and editing is contained in the main Falcon user manual.

Though Falcon has an easy to use front-end with plenty of geek-friendly complexity in the backend once you become familiar with it, new users will no doubt be a little overwhelmed with the plethora of editing screens and options at first.

Fortunately, as with all of the UVI expansion, most of the heavy lifting is done behind the scenes and you’re presented with clever macros controls on the front page to perform most of the modulation and effects required to showcase the preset.  I’ve never felt compelled to dive into the editing side of Cinematic Shades due to lack of control features but knowing the features are there for expanding on the sound is good to know

The first collection of presets is the atmospheres section, all providing incredible depth and 3D-like surround sound, even on stereo speakers. The frequency extremes are impressive, and somewhat concerning for speaker safety.

A few times I was bathing in the immersive evolving sound of a patch and could feel air blowing on my face – only the drivers on my studio monitors working so hard the air forced out of the ports from nearly 2 meters away, yikes. Not only does the sub-bass work your monitors hard, but more than a few patches push hard on your tweeters too. Take the preset ‘War’, I seriously thought I had damaged one of my monitors after hitting the damage control too hard. Be warned.

Pretty much all of the presets are dark, moody and unnerving – perfect for any sci-fi thriller or post-apocalyptic horror soundtrack you’re working on.  With preset titles like Dark Matter, Predator, Death Machine and Witching Hour you can get the feel of where UVI are targeting this expansion.

Diving straight into the first preset ‘Amino’ shows off the capabilities of the device immediately. A very ominous bass drone with panning synth texture. Twiddling with the Twist, Mutate and Morph X macro controls provide interesting variations and complexities. The vast majority of presets are one-finger affairs with evolving mutations, though what is clear from right away is the preset you load can change vastly depending on the parameters of the macro controls, so each requires time to experiment and explore. Often times the key release offers a further surprising little element, its worth holding on for 20-30 seconds when you’re previewing patches, just to see what evolves and what happens when you lift the key.

Some presets like Horror Strings, for instance, have incredibly long evolves that don’t really start to shine until maybe minutes in. This patch takes around 40 seconds to morph with high tension strings, choral voices and a ridiculously huge reverb tail. It’s a great example of a very usable sound design preset, especially when you mute one or two of the wave samples. Some of the best sounds I found were when layering Cinematic Shades with other Falcon presets, such as the amazing factory pads collections, all of which sounded amazing combined. 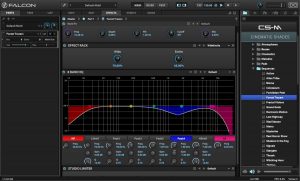 Thanks to its modular design, Falcon offers an incredible array of granular and wavetable synthesis filters and effects you can modulate presets with. Of course, you can also layer other expansion libraries to create cataclysmic scale patches easily. Using other factory Falcon presets as layers provided mind blowing levels of wonderment – truly unlimited sound textures and ideas here for any project.

Falcon does a great job of getting the synth out of the way, allowing you good levels of creative control before needing to dive deeper into the workings. Each presets offers unique macro controls laid out in a similar style with performance knobs along the top, morph controls in the middle and effects along the bottom. Buttons for muting elements in the patch, FX controls like reverb and delay, plus easy to work out performance controls like twist, morph, drive and tone allow you to become proficient with the operation in no time. These macro controls are simple puppet strings controlling deeper functions within Falcon, so its possible to modify their parameters and even add new custom macros as you need.

It’s not even that hard on CPU, loading up Cinematic Shades and three other expansion layers I was sitting around 30%, single instances usually around 10-12%.

While you could use Cinematic Shades with commercial pop music and the likes, it’s clearly designed to be a sound design tool for film and TV. You would find more use from many of the other UVI expansions if you’re only looking for atmospheres and FX for your tracks. 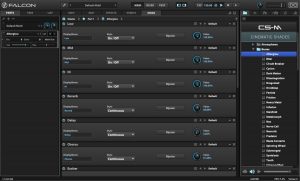 We happen to have a bunch of similar titles under review at the moment so had a chance to compare Cinematic Shades against some of the big guns in the market like Spitfire Audio new BT Phobos, StudioLogic and ProjectSam. Immediately it was clear there really wasn’t any difference in regard to quality, performance or, to be honest, end results. Since you’re dealing with a very subjective genre of sounds, what works for one project won’t for another, and what I find interesting might be white noise to someone else. I, however, never ran short of inspiration or felt I was coming near the sonic boundaries of Cinematic Shades capabilities – though to be fair, UVI do have the upper hand thanks to Falcon’s toybox of synthesis tools and expansions libraries you can layer to pretty much create indefinite sound ideas.

There is a very definite ‘sound’ to Cinematic Shades when just used as a stand-alone instrument. ProjectSam tends to be more orchestral and vocal, StudioLogic more experimental and organic, Spitfire Audio more detailed focusing on quietness and space. Cinematic Shades is darker, heavier and more synthetic. It’s the black sheep of the bunch, the weird creepy guy at the party. You go to Cinematic Shades if you’re looking for uneasy tension, suspense and spooky drones.

I don’t think you can call any of them better or worse, just better or worse suited to your project. Cinematic Shades is possibly the more leftfield of the bunch and less flexible due to its ominous nature – you definitely wouldn’t hear it on a children’s movie soundtrack…ever. Wildlife documentaries or love stories, corporate jingles etc, look elsewhere. Stephen King’s next cinematic soundtrack, however – yes, perfect.

This is a very exciting development in the Falcon expansion range and leaves one considering future releases and how UVI intend to further push the audio boundaries. 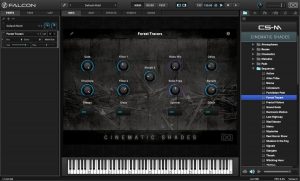 Cons. Well, it’s tough to find anything to gripe about really – certainly not in the sound quality. The presets do have a similar sound to them, mostly sweeping lows and weird midrange textures. I would have liked to have heard more orchestral percussive stuff, timpanis, kettle drums, that kind of thing – considering it’s a ‘cinematic’ collection. Being an expansion, it’s of course not going to be a 100% solution for all your needs, rather another bowstring in your collection.

There is some competition out there in this market, Spitfire Audios amazing BT Phobo come to mind, but I think UVI have nailed the interface design. It not only looks great but its simple and intuitive to use, something you will never hear being said about BT Phobos.

A fantastic addition to the ever-growing selection of Falcon expansion packs building on UVI’s rock solid foundations. If you’re in the market for interesting and creative production sounds, all of the current expansion packs should be on your wishlist.  Cinematic Shades is targeted more towards sound design and film work, of course, but still has some use in contemporary pop, EDM, prog rock and even symphonic metal or the likes.

Cinematic Shades requires UVI Falcon to work, which is $349 right now, but it comes with a $100 voucher to buy more UVI stuff – so you can throw in Cinematic shades and a few other libraries to get you going. If you already own Falcon, $39 for this is the bargain of the decade.