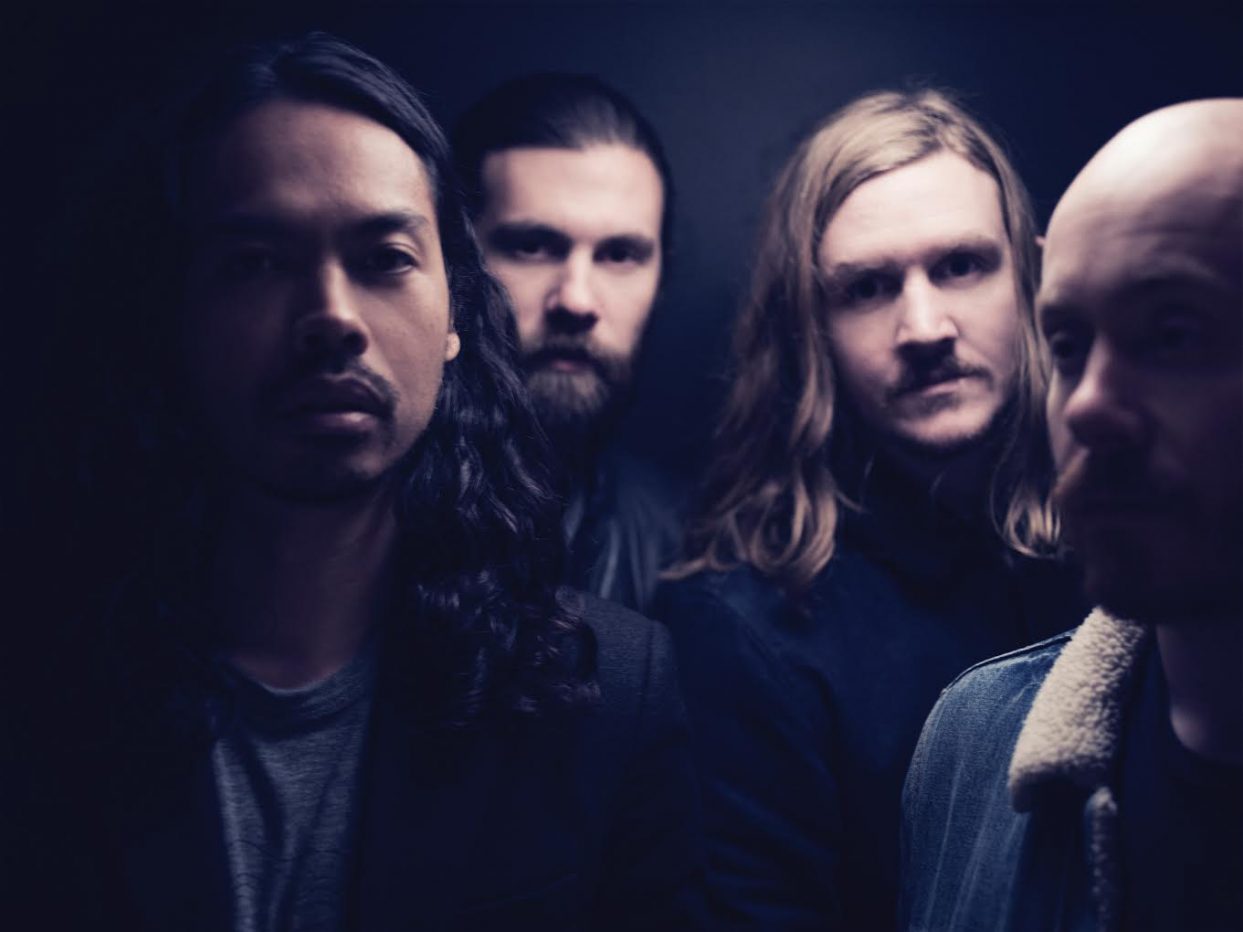 Heading off a whirlwind world tour, Aussie outfit Temper Trap stop over in Kiwiland for a quick jaunt at the iconic Powerstation in Auckland.

After a snazzy little pre-gig pizza party I took a stand on the balcony for a change to get a nice view of the stage. Layers of feedback growled and whined through the Powerstation as The Temper Trap set the mood to their intimate set. When they began to play, though, the mix was very noticeably unbalanced. The volume, as a whole, was weak, and the guitar and bass lines got lost within each other, so it was a relief that at least Dougy’s vocals cut clearly across the muddy mix. Perhaps they didn’t want the drums to sit too far forward either, which is fine when Toby Dundas was keeping a steady beat, but it meant that his tom fills were without impact or ‘oomph.’

I was busy ogling over their gear when the subtle percussive chords of Love Lost began to play, sending shivers and causing screams. I have to admit, my teenage self had a little fangirl attack. Though again, the mix seemed a little held back and lacked the crispness of the delicate subtleties I loved from the recording – a little disappointing.

We were lucky enough also to get some sneak previews from their upcoming album Thick As Thieves which is due out on June 10th. They claimed they wanted to use us as “guinea pigs” for their new sound, and it looks like the majority really ‘Doug’ the vibe (see what I did there?). Let’s just say that June could not come soon enough!

Dougy was an absolute people pleaser, sporting plenty of crowd interaction and fantastically through himself into the crowd at the end of the set, welcoming the throng of fans wanting to grab selfies and hugs as he concluded the last track of the night.

Because I can’t help it, I have to make a little gear mention… Although pedals are what I was most intrigued about, I can tell you that all guitar players (bass included) were big Fender fans, with amplification brought to you by Vox, Marshall, and Ampeg, and the beat lusciously served up by Yamaha.

Now, bassist, Jonathon Aherne was one super grooving human. Watching Jonathon was like watching someone paint a watercolour abstract in the air with his headstock. He was just so fluid and into it, and by far the best musician to watch within the group. He was all hips, knees and hair swish – trust the bass player to not only keep the groove in the pocket but spread it around like pixie dust in its delivery.

About a third the way through the set, the sound guy finally clued up. All of a sudden lead lines filled up with volume and tone. The bass was booming through the bottom end and the drums became crisp and punchy. By the song following this, everything just got LOUDER, stronger and harnessed so much more emotion. It was fantastic!! Everything fit better cause the individual frequencies weren’t tripping over each other, and each instrument had a clear and audible balance in the mix.

Dougy’s vocals during Resurrection were as piercing, dynamic, and smooth, as you could have hoped they would be. I realise they are all pro musicians here but it is always a treat to hear such vocal control in a live performance.

Dougy let us know that”This one’s for all of you” as Sweet Disposition set the crowd on fire and finished their set.

I thought my hopes for an encore were doomed as the sound guys started unplugging guitars, but lucky for us, they were just prepping the stage for Temper Trap’s extended encore. Finishing on Science of Fear, they farewelled the crowd the same way they started, with a whiney feedback outro. Very cool. 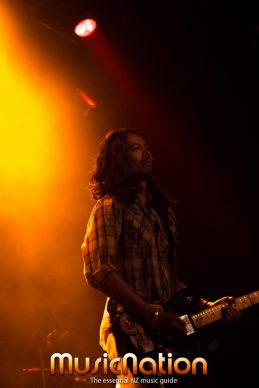 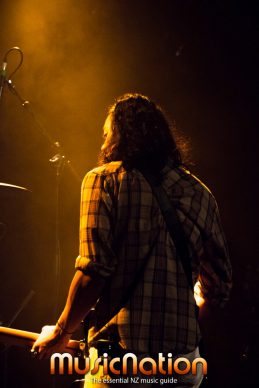 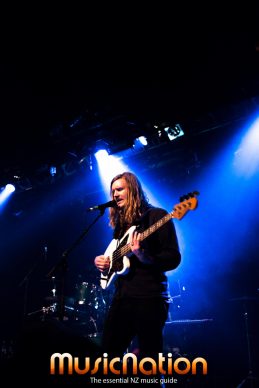 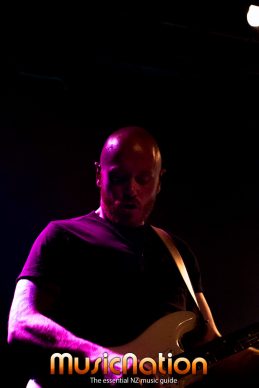 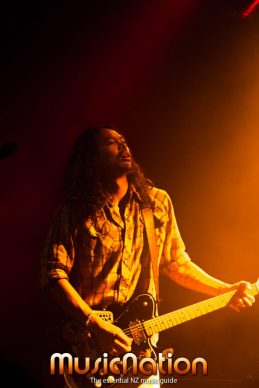 Anyone who knows the Temper Trap song Sweet Disposition, will testify it’s the modern rock anthem for our times. Vocalist Doug Mandagi’s wispy falsetto is unique in rock, his vocals a perfect juxtaposition to the driving pop indie guitar sound generating from this talented Australian Band.

Songs from the new album Thick As Thieves were tested on the eager Auckland crowd, the title track Thick As Thieves, So Much Sky and the extremely catchy Summers Almost Gone teasing the crowd as singer Doug stood serenely composed, his long locks giving way to his occasional flirt with the maraca while drummer Toby Dundas was a jack hammer behind the kit, pitching in when needed on backing vocals.

Local Dunedin boy done good, guitarist Joseph Greer was singled out as the crowd acknowledged one of their own as Mandagi remarked to his parents in the audience “Thanks for raising a fine young man, you guys did a great job”.

The Kiwi ‘love’ didn’t stop there either as the boys fired out a delicious funk twist on kiwi band Unknown Mortal Orchestra’s Multi-Love in the finale, the treatment sounding every bit as delicious as the original, it was an intimate connection with the crowd.

The group are about to embark on an arduous world tour in support of the new album taking in Great Britain, North America & even Indonesia so tonights IHeartRadio gig was the perfect launch pad, a precursor to the band’s new album that’s already been earmarked by fans as a classic.

The band quickly fired out a mix of old and new tunes including Trembling Hands, Lost, Bur, Love Lost. The crowd gravitated towards singer Doug, his charisma quite Hutchence-esque under the muted lighting as Greer let rip with the familiar guitar chords of their 2008 smash hit song Sweet Disposition.

Animated bassist Jon Aherne’s heavy-as-stink distorted bass on new track Alive was matched in intensity by his kiwi counterpart on guitar, the two in sync on the instrumental The Drum Song while a drum stick wielding Mandagi had the crowd clapping in unison as he danced intermittingly across the stage.

Of course, the obligatory encore was expected and the crowd made sure of that, the band came onstage again appreciative of the crowd while the band encouraged fans “to come to the merch table, come and say “Kiaora” closing the night with a few choice songs including their latest single Fall Together.

Temper Trap are the perfect dichotomy between pop and rock, their music nicely tipped with its indie leanings. The band have an honesty that is hardly attained lyrically by most artists, while their new album Thick As Thieves will be an overdue welcome by music fans eager to greet it with arms wide open.