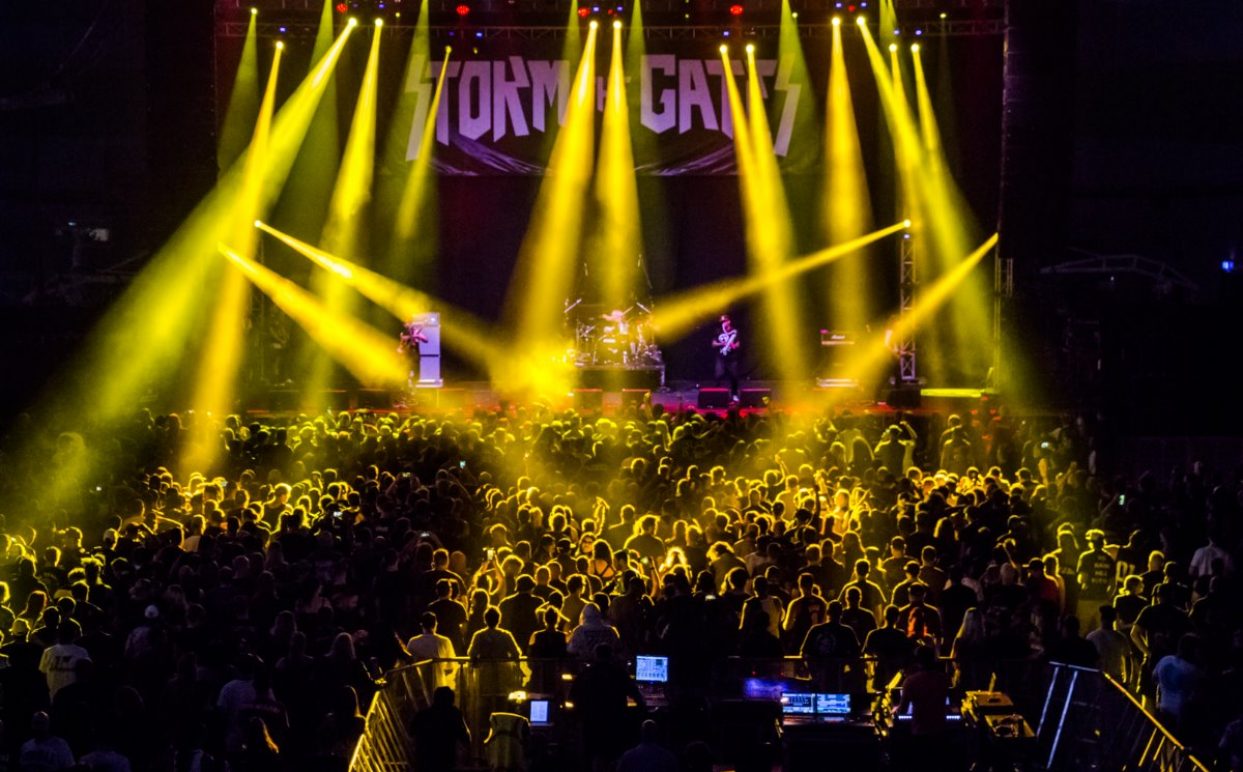 As I arrive at Storm the Gates, I have no idea what I’m in for. Being this is my first festival, I’m nervously excited, especially since almost last minute it was changed to be inside. Walking in, there are all sorts of people everywhere. Young, old, bogan, I know I’m certainly in west Auckland.

Opening for the days’ affairs was Minimal Silence and as there weren’t too many people here yet, not everyone got to hear their great sound. With the Howick based kiwi band, who took out Smoke-free Rockquest 2017, they were certainly hyped for the day.

With a quick set and a short break, Skinny Hobos were next in line! They always nail it and today they didn’t hold back. Rocking out in all forms, I was on my way to a rocking great night. While they play all their great classics, including The Merchant of Tirau, I am singing along beautifully. After their set, and while chilling at The Rock booth, Sam the drummer, is also chilling out enjoying the affairs after playing their set. Talking with him, of course, I was excited, he really is still just a guy at the end of the day and super lovely to chill with. Sam you and your band awesome! Thanks for your great music. Keep it up!

Written by Wolves, another kiwi band, were up next and they had a tough act to follow. However, they also managed to pull it off and rock out nicely. Again, with a quick set, they too were hurrah’d off when they finished their songs. Everyone loved them! Go you guys, you did great! By this time also, there were more people starting to arrive and get ready to party on, the weather was holding up so this was also a bonus.

City of Souls up next, and I’m looking forward to them! As I take my place in the room, they come out on stage with so much energy and really get the crowd going! What a fantastic way to keep the place in a hyped-up energy. Finishing off with a great song, Long Gone, left me wanting to hear more of them. Please come out and make a tour, I will so be there!

Another quick break and me back chilling at The Rock booth as it seems to be where all the cool kids hang out, HED P.E. was up next. Hearing them for the first time, I was pleasantly impressed. Starting off sounding somewhat reggae and then pulling together to include some fantastic rock beats, they drew a great crowd. Coming all the way to Auckland from California, they were privileged to be apart of the open acts for Limp Bizkit, who everyone was really super psyched to hear play tonight.

By the time Suicidal Tendencies were about ready to play, half the room had now packed out and The Rock had a great way of announcing them while we waiting for them to come out onstage. They opened with a bang and had so many fans in the audience. They were a great hit with all their fans loving every minute of them playing. They are all super talented musicians and had some serious skills. Way to go guys, you really rocked out!

Everyone was now waiting excitedly for Sublime with Rome to come on out, one for the 2 main acts for the night. We were pretty close to the front at this point, so there was carnage all around me. I was in the thick of the night. This was it. Don’t hold back now…. They played all their great songs, opening with Wrong way. How could you not love them!!! Everyone was singing along, knew all the words and man there was some serious weed sessions happening all around me. A cloud was rising above the whole room and if you wanted it or not, it was everywhere. They typical Sublime way. They were fantastic live and sounded every much the same as they did on radio, just better! With amazing lights playing around them while they partied on, we all knew the words. Hands up and down in the air, people everywhere just jamming out. This is what it was all about. Too soon did it all come to a happy end, with them signing off with Santeria. So many happy people all over the place, and now there was short interval while Limp Bizkit were the main event that so many happy fans had come to watch.

Fashionably late to their own show, Limp Bizkit finally come out on stage, opening with Rollin’, I knew every word to the song and I’m pretty sure everyone else did in the room as well. What an opening I was hyped and ready for more! The Fuck Song was up next of course and with great lighting effects we everyone was reminiscing the Chocolate Star Fish album in a big way. I was taken back to my teenage years again, ah yeah…….

Half an hour into their set they rave about how fantastic their DJ was, wondering why he was spinning, I had realised it was because Durst had gone off the stage for a brief break. Back a few minutes later, he was asking the audience what song we all wanted to hear. “Give me any song request and we will play this for you.” Well alright, a bit unorthodox but lets just roll with it. My generation, another great classic was played and I’m seriously right in my element along with the whole rest of the crowd in a packed-out room. Once this was played, the band kept playing while Durst takes a few moments to introduce his band and explain how much he loves Auckland and how is happy to be here. Welcome man, now play a song! 5mins or so later, he decides he wants to just make it one big party and like any great party, Karaoke must be involved. After asking the audience what song to cover, they do a fantastic rendition of Rage against the Machine’s ‘Killing in the name of’. I really was having an interesting night of anything goes. Up next, and an obvious must have, “Nookie”, however I am still yet to decide if he literally forgot the words like he suggested, or if it was a great way to interact with the crowd, as a young lad was asked up on stage to sing the words for him. Awesome man, everyone will love you forever now!

The nigh is starting to wrap up, as Limp Bizkit take more time out of their set to talk with the crowd and take break. Hydration is key after all, but unfortunately by this time with all the unplanned ‘breaks’, about half the back of the room had now decided it was time to go home. And to be fair, I didn’t blame them.

Finishing off with another great classic, Take a look around, the rest of us who were still holding out rocked out to the end of the night. With great lights, and when they actually played it was fantastic music, overall, I enjoyed myself. Did you?