Overkill can be used to describe many things in life. Supercars, nuclear weapons, 80’s fashion. Spitfire Audio can be added to that list now with the release of probably the most over-engineered sample library in the world.

To Paul Thompson and the lads from Spitfire Audio there is no such thing as ‘that will do’ apparently. I have always been impressed by the scale and level of detail with any of the company’s products, even seeming mundane software titles. But this time they have really taken things to a new level – a whopping 200+ gig sample library based on a single piano. Yikes.

Hans Zimmer Piano is undoubtedly the most detailed and expressive virtual piano we’ve encountered, and it’s not even marginal – we’re talking light years ahead of anything we’re running here in the Music Nation studio. There was plenty of face-holding, wide-eyed disbelief at the incredible sound results from this library when we first installed it, but at what cost did all this madness come at? More on that later. 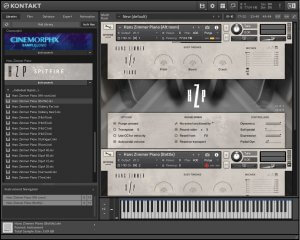 Hans Zimmer Piano is a sampled piano expansion library for Native Instruments Kontakt Player (included with your purchase). It is a meticulously recorded Steinway D piano that belongs to AIR Studios in London – and by meticulous, we mean stupid meticulous – at least 60 mics were used in the process.

The story goes that Hans loves the piano at AIR due to the inspiration he gets from playing on it on late night sessions, often coming up with nice lines and ideas for future arrangements.

While the piano itself isn’t anything special (that is, over any other amazing $300k+ Steinway concert piano), the real magic is in the room – it sounds incredible. Fading in the various room position mics opens just brings the piano alive.

The library was recorded in minute detail with Mr Zimmer on hand throughout the process to ensure extra attention was applied to the subtle nuances. Using absolute high-end equipment (such as the Neve 88R mixing console) Spitfire went all in on this project to make sure nothing was left out – or ever needed to be done again by the sounds of it.

The insane number of individual mic recordings you can load up to create your own perfect sound is mind numbing. 16 I count, plus fx and percussive samples (like the banging on the lid, kicking the pedals and some interesting treatment fx using brushes, paper clips and other weird objects)

There is so much character it’s almost beyond description unless you’ve actually played on a real concert grand before. On a real grand piano the power behind such a massive instrument is intoxicating and you can feel it coming back through your fingers. Its also the sound of the lightest touch that I love most. The hammer falls on the string, the harmonics and the sound of the acoustic body of the instrument is simply wonderful. Its also the room acoustics and the way the sound reverberates from the back wall in a theatre, this all effects the way you play and the emotion you put in and get out of the instrument.

Spitfire Audio have tried their best to capture this feeling with Hans Zimmer Pianos. There is as much attention put into recording the strings as the room acoustics.  The little squeaks, rattles and pedal noises all add to the emersion. 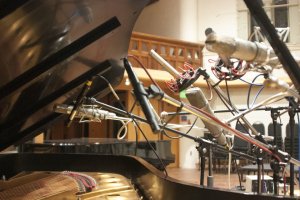 The magic in this library is the room recording mics. You can very easily change the entire character of the instrument by mixing different mics resulting in a very flexible sound. One of the more interesting preset is the Super Soft patch. High volume notes are one thing most piano samplers do well, but the quite, low-velocity stuff I have never heard done well.

Hans Zimmer Piano is better suited towards scoring, orchestral and jazz recordings, much of the subtle details would be lost in a pop or rock recording. Using it live as a performance piano would be brave due to the long load times and high system requirements (see below), 95% of which would be lost on people in the crowd. No, Hans Zimmer Pianos is about.

Hans Zimmer Pianos should appeal to songwriters in particular. Not even the high-end digital keyboard offerings from Kurzweil, Yamaha or Korg match the level of detail here. With a decent weighted MIDI controller and a laptop you have pretty much the best piano setup available.

There is not much even close to Hans Zimmer Piano to even compare it to. Perhaps Reasons excellent Paino Refill, True Pianos or maybe Alicia’s Keys? But really, no. Nothing has the detail or the pure weight of samples behind the massive library.

At what cost is all this power?

Ok, we’ve covered the good stuff, now there must be some downsides, right?

Firstly and most limiting is the price. At $500 (NZ Dollars), this is a hefty outlay. Considering it’s a single instrument, that puts is way outside the realms of your average bedroom producer. You could purchase 5 or 6 other piano sample libraries for this, though I doubt you would be as impressed sonically. If one considers the man-hours and talent that went into creating this package, not to mention Mr Zimmers input and the amazing studio, the price is a steal, really. 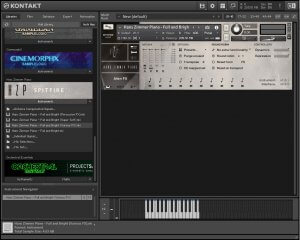 The computer requirements is no for the weak hearted either. You’ll need some cutting-edge hardware to run this at full noise. Our review system is a Windows 10, i5 6500 3.2GHz with 16gig RAM and an SSD system drive, no slouch – and the main patch with all mics take around 2 minutes to load – Im not joking. We basically select a patch then go make a cup of coffee. The software will automatically purge samples you’re not using to reserve CPU processing and you can reduce round-robin layers while previewing, but scanning through patches at full resolution takes time – and many cups of coffee.

The included ‘distance compensated’ samples fix the slight time-lag experienced when using such a huge room to record in. In general, I found these to be much more pleasing than the main instrument patch itself. Its a shame they didn’t focus on these collection of samples primarily then leave the non-time-aligned samples as an option.

Another couple of weird quirks is the realism takes some time to get used to. It’s a funny thing, but if you’re used to using standard pianos samples (or in my case our aging Yamaha MOTIF ES8), the way Hans Zimmer Piano is balanced so perfectly is a little unnerving at first. The strings tend to swell after the initial attack, particularly on big power chords – as that’s what happens on a real grand piano. Also, the natural harmonics quickly gets out of hand if you’re too heavy-footed on the sustain pedal, as I tend to be.

It is a massive download, over 211gig installed and you’ll need 400gig of free space just to set it up – so that 250 SSD you thought would carry you for the next 10 years or so…nope. The library is so massive you can also order a hard drive version. There’s no manual either, so you’ll need to pick through Spitfires dreadful website to find any info on the product.

The biggest drawback really is the lack of demo, or any real way to create a demo – as this truly is something you need to play to believe. The videos below will give you a good indication of what you’re in for, but ultimately this is an expensive leap of faith.

This is an extreme instrument not only in depth but price, which will exclude all but the high-end and high-budget VSTi collectors. If, however, you are a songwriter primarily using piano and don’t mind investing into a quality instrument – here is the piano library you need – no contest.