An unlikely side-effect of the advent of personal computer-driven home recording and production is that formerly shadowy figures such as record producers and composers for film, television, and games have turned into minor celebrities.

In video after video we see them interviewed, enjoy tours of their studios, watch them make beats under time constraints or with a random selection of samples and, as with many of Spitfire Audio’s recent releases, have the chance to buy sample libraries curated, created, or endorsed by them.

Probably the most well-known film-composer of our time, Hans Zimmer is a colossus whose work has boomed out in multiplexes for the past quarter of a century. From The Lion King, Pirates of the Caribbean, and Kung Fu Panda to the Batman Dark Knight films, Inception and, more interestingly in my opinion, Interstellar, Chappie, and The Ring, he, together with his studio-mates and former employees, largely dominates the Hollywood film-composing scene.

Rumours abound that his work is done by a small army of composer-drones while he films ‘masterclasses’ in his Victorian-styled room full of priceless modular synths, collaborate with Pharrell Williams and Johnny Marr, and tours the world performing his impressive back-catalogue of blockbuster hits. Setting Hans Zimmer the brand aside for a moment, however, I think that even the most determined nay-sayer would admit that Hans Zimmer the human has brought a hugeosity, an epic-ness, and a visceral intensity to the sound of recent mainstream movie music.

He has done so, predominantly, with his powerful coupling of an orchestral palate with ‘rock’ instruments, synthesizers, and enormous percussion, and it is to the latter that Spitfire’s HZ 01, 02, and 03 are devoted.

The Hans Zimmer percussion library comes in three instalments HZ 01, 02, and 03. The philosophy behind the series is that, rather than create a percussion library from a software development and marketing perspective, they would instead record some of the percussion arsenal that finds regular use in Zimmer’s own projects and sample it in the way that he and his team would for a Hollywood score.

The result reveals something interesting about how they do things in Tinseltown… gigantically, it seems; in what amounts to a hard drive bonfire, the whole library clocks in at a whopping 128.2 Gig. We can rest assured, then, that whatever else we’re getting we’re getting some very high-quality samples, despite the fact that, for the size of the collection, there are not that many of them. The concern throughout, then, is with quality rather than quantity. 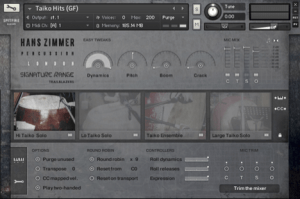 The GUI, which applies across the whole HZ series, allows relatively quick switching between groups of instruments (and the whole collection if one loads the ‘All In One’ patch), as well as providing some ‘easy tweak’ sliders for velocity response, pitch, ‘Boom’ (essentially a low pass filter) and ‘Crack’ (essentially a high pass filter).

There is also a very effective mixer which allows one to choose between and blend close mics, rooms mics, and mics still further away. Each option/combination sounds fantastic, and this feature increases the flexibility of the libraries enormously.

HZ 01 is the largest of the triumvirate in terms of instruments (and price tag) and consists of percussion ensembles of various sorts – anvils (which sound very much more like brake drums than anvils), bass drums, bombos, boobams, buckets with darbuka, buckets with snares, buckets with nasty sounding metallic crushers, dohls, gong drums, surdos, taikos (solo as well as an ensemble), timpani (struck with soft and hard mallets as well as rods), tombeks, djuns with a newspaper laying across the head, and a couple of slightly dull sounding piatti and tamtam hits.

In the interminable world of percussion instruments, this is of course a tiny array of configurations, but each has been chosen for its cinematic power and, recorded in very conspicuous stereo, they sound absolutely great. I really mean it – the sound quality is amazing, and when it comes to paying for high-fidelity samples, I’m a fussy bastard (and frequently disappointed). As a collection of sounds, therefore, HZ percussion delivers where it counts. 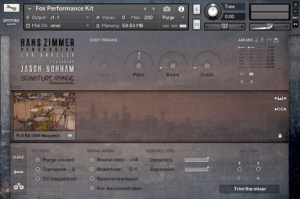 In terms of sample choices and playability, while the round robins are beautifully done and some of the larger drums feature rim hits and slaps as well as full strikes, for most of the drums there are just two live keys and perhaps a third featuring a roll (that can be given a semi-convincing de/crescendo via the mod wheel).

This, coupled with the limited selection of instruments, means that what one is getting in the package is essentially a small gallery of superb quality and interesting sounding ensemble hits…‘bang’ goes one key and ‘bang’ goes the other, and, depending on the velocity you use, that’s how you play each ensemble.

Having once been told by a percussionist that even a deceptively simple instrument like a guiro contains an entire universe of sound, the Hans Zimmer percussion library’s philosophy seems much more of the school that a drum goes ‘boom’ or ‘whack’ and can be captured with a few well-recorded strikes at different velocities in the centre of the head.

I myself would have much preferred a wider selection of hits spread across a few keys, or even Junkie XL’s approach which spreads a drum across the whole keyboard, each key playing a different velocity strike, so that one can play the virtual instrument in a more intuitive way and with greater variation. As we will soon see, Spitfire’s new Kickstart engine may signal a promising shift of approach in this regard.

What HZ 01 may lack in terms of playable keys it certainly makes up for in terms of mixes, providing three entirely different versions of the library (accounting in part for its enormous size)– one mixed by Grammy Winner Alan Meyerson, another by the renowned Geoff Foster, and a third by Hans himself. As great as these engineers are, I suspect that most users, like me, will have a favourite sound and gravitate towards one particular set of mixes (or ‘artist elements’) as they are called. I myself strongly favour Alan Meyerson’s, which are super fat and have a nice detailed top end, whereas Geoff Foster’s approach sounds softer and more ‘classy’, while Hans Zimmer’s is darker and more ‘in your face’ with an extra dose of medium to low mid-range.

If this doesn’t present enough options for you, there is a folder of additional mics in which one can open the instruments yet again, this time to create one’s own mixes, blending from among a selection of six mics in all sorts of different positions for really fine-grained tweakery. It’s worth bearing in mind, though, that even the closest mics don’t completely dry out the big spaces these instruments were recorded in, so a certain amount of reverb is always ‘baked in’ to even the softest strikes captured with the closest mics. 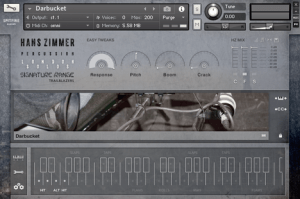 I’ll leap straight into HZ 03 here, as it’s very much a companion to HZ 01, featuring most of the same instruments but recorded solo instead of in ensemble form (the instruments omitted seem to be mainly those that, like the taiko, were already featured solo on HZ 01 –the ‘anvils’ being a notable exception-).

Again we have the three different mixes and again we have the folder of additional mics for extra tweaking, which, in a way, is what I think HZ 03 is all about. Thus, rather than a fully independent library, I would see HZ 03 as more of a chance to separate out some of the instruments in HZ 01 and replay or recombine them in one’s own ways. It’s for those people who, after hearing the various bucket ensembles in HZ 01, are desperate to get their hands on the bucket without its various accompaniments.

Like its predecessor, it sounds great, but what it offers, in this way, is not new sounds as much as more control over old ones. The pricing too, with HZ 03 costing around half the amount of its forebear, seems to reflect this point of view.

HZ 02 is a different kettle of fish entirely and features neither orchestral nor ‘world’ percussion but some meaty recordings of a rock drum kit, struck by none other than the son-of-god Jason Bonham himself, again with mixes by Alan Meyerson and Geoff Foster, and this time proliferated still more by moving the kit between three different Los Angeles locations – Sony Studios’ scoring stage, 20th Century Fox’s famous ‘Newman’ scoring stage, and a space of Zimmer’s own mysteriously known as “the cathedral” (presumably because of its sound rather than any occult function).

Again it’s Alan Meyerson’s mixes that are my favourite, and again I find the number of keys on offer to ‘play’ an entire drum kit to be a bit limiting.

Personally I would have found it more useful to have more of the kit recorded and playable on more keys in fewer spaces and with fewer mixes rather than vice versa, for as important as mix engineers and studio spaces are, a drum kit, to my way of thinking, is an instrument that is capable of a myriad of interesting sounds that could be of use in creating sample-based music.

Given that the intended purpose of this library, though, is to give people access to Hans Zimmer’s signature film-scoring sound, the slightly ‘primary colours of rock’ drums that one gets with HZ 02 would serve well to add an aggressive and contemporary flavour to an otherwise largely orchestral palate. The library, that is to say, provides a rock drum kit with a capital ‘R’ and a small ‘d’. 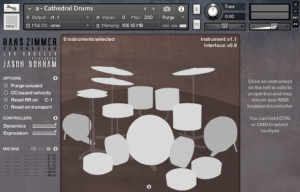 As if in answer to my above complaint, HZ 02 now also comes with the Kickstart engine, an alternative GUI that allows one to create a customized player for the instruments on offer. At this stage only the ‘cathedral kit’ opens in this engine, but despite that limitation, the possibilities for customization here are huge, and address many of my earlier concerns. For every drum one can choose between an assortment of different hits and rolls, beaters, sometimes different drums or parts of the drum, and then assign them to different keys, creating whatever sort of monstrous kit one’s heart desires.

By way of experiment I tried turning the massive sounding cathedral kit into something soft and sinewy, and was impressed at how, by painstakingly choosing between the right combinations of initial mix, microphone balance, strikes, mallets, and key placement, the big rock sound can be gradually transformed into a very playable drum kit with more of a delicate feel. If one is willing to spend the necessary time, therefore, this offers a great way to get the most out of the samples in the HZ 02 collection.

Finally, as the Hans Zimmer artist element of HZ 02, instead of a third, Hans Zimmer, mix of Jason Bonham’s ample hits we get a nice ‘kit’ of synth drums, created using Mr. Zimmer’s imposing banks of modular synths. These can create some ear-shattering sounds and, used in conjunction with some of the more organic sounds in the library, can result in some very big hits indeed.

They also sound cool by themselves, and in some ways, while they appear something of an afterthought, I could see myself getting almost more use out of these samples than the rock kits in the package.

The same cannot be said of the bonus samples of Jason Bonham striking a bass drum with a doll’s head, but they do serve as a welcome reminder that experimentation is a crucial dimension of studio work.

Full details on both HZ1-3 are available at Spitfire Audio www.spitfireaudio.com