So you thought the cosmos is the largest thing in creation, well all that has changed with the release of Spitfire Audio’s eDNA-Earth!

The scale of this instrument is immense with a whopping 1900+ sample instruments running through a duel engine player with incredible routing and flexibility. The latest patch includes a new sample set that all up gives you over 3300 sounds to use! A little snippet from the recent release notes quotes ‘Spitfire calculates that if you listen to each one for just 30 seconds it will now take you twenty-seven and a half hours to listen to them all, and that’s without cigarette and pee breaks!’ – that pretty much sums eDNA-Earth up right there, it’s big, ok.

Back Down To Earth 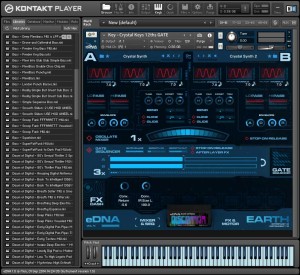 First, let’s go over the basics.  eDNA-Earth is the first in a new series of eDNA libraries to be released by Spitfire Audio. It is a collection of thousands of instrument the company has assembled over the years combined into one Native Instruments Kontakt package, all of which have been mangled, stretched and poked to produce out of the world results (pun intended).

At its very basic level is a dual sample playback instrument with advanced synth controls.

Each playback engine can be loaded with supplied sample instruments from what Spitfire calls ‘cartridges’, which in turn are a smaller collections of patches arranged into somewhat loosey-goosey genres – even though the cartridge titles far from describe what each contains.

You are not going to find simplistic sounds here, no piano or organ patches. Everything is huge and designed to be manipulated be the mod wheel to even further morph into new and interesting textures. In all its glory and power, eDNA-Earth does suffer from listening fatigue as you plow through endless patches – all of which start to sound the same after the first 20 hours.  As with any power synth, the trick is to adventure off the beaten track and start creating your sounds from scratch, a much more rewarding experience.

Something you will need to quickly become accustomed to with this instrument is its way out there interface and patch titles. In many cases there is no relevance between a patch name and the resulting tone you get when loaded, leaving you to blindly stumbling through patches hoping to stumble upon something usable.

The primary interface also is like something off a Cylon space fighter with that huge oscillating eye in the centre of the display.  It’s a bit of a shame such an incredible collection of sounds and quite brilliant use of the Kontakt architecture is somewhat hidden amongst a gimmicky pantomime theme. All of this will either work for you aesthetically or not. I must admit I was quite cold to it all at first, but with perseverance, I’ve overcome my initial thoughts on the interface.

Also, just to make thing interesting, there is no manual included – you need to search through the Spitfire Audio site to find the forums which contains the written manual. Annoying somewhat, but it’s well written and worth the search.

Ok, so interface gripes aside, how does it work?

eDNA-Earth follows a fairly easy to navigate signal flow starting at the top of the main page and going down. Loading up one of the cartridge presets should load a sample in each of the banks labeled A and B. Each bank has an excellent collection of tools to play with – three oscillators (Volume, pitch and filter wobbles), a high and low pass filter, envelope, bend, glide, clone (unison) and sample tune, pan, offset and trim. Directly under this is the infamous Cylon eye oscillator that when turned on will crossfade between banks A and B.

The signal then flows into the gate sequencer, which is variable from 1 to 128 steps, and speed of 0.5 to 256. Finally, you have the FX dash, an automatable collection of custom effects you define on the FX and Monitoring page.

Phew, sounds like a lot going on, right – you be correct. However, looks can be deceiving as everything becomes second nature after some time.

The patch browser is a little confusing to navigate, but it is fairly typical of many Kontakt instruments.  You can choose between cartridges (designer patches), factory sounds and individual instruments.  Opening the individual instruments is just crazy, there’s 3300 odd of them. The Factory Sound collection is the same except they are all arranged into groups of instruments, for instance, Synths, Filth, Warped Strings, etc.  Unfortunately, that’s about all the help you get, if you load up Synths, for instance, there is no description of what synth you get or where the sound originated from, you just get bass 1, bass 2, bass 3, etc. From all the work put into creating these sounds, I would have liked to have a short description of what I’m using or how they came to create the patch.

The default Kontakt database search system works well, allowing you to search for instruments across Earth and other instruments you own. 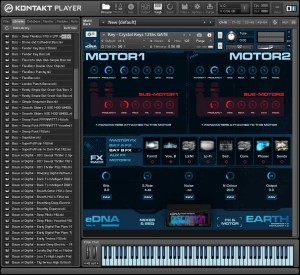 eDNA-Earth is a peculiar beast to write about.  Not only has it a ridiculously huge library, but the scale of the sound timbre is awesome.

It’s not difficult to clip your outputs and saturate the full headroom of your PCs output, there’s just so much going on sonically.  The applications for such a titanic sound I first thought would be limited to perhaps movie scoring or game soundtracks. It wasn’t until after listening to a few composers using eDNA-Earth that I dawned on my the trick with this instrument it is to sprinkle subtle splashes throughout your song, and not necessarily to try to compose full tracks.

The brand new ‘Wheelspin’ cartridge really puts eDNA though her paces. Designed by R&B and EDM stalwart Jefferson Chambers, these presets have been lovingly crafted to react to a single controller. Hold down any note on any of these presets and slowly roll your modulation wheel up to see what awesome carnivals reveal themselves.

eDNA-Earth could just be described as a pad instrument, and though it does offer a few interesting leads, basses and FX patches, the main focus is on atmospheric evolving soundscapes.  This is a rather crowded market place at the moment with some very stiff competition from developers like Sample Logic and Spectrasonics dominating the genre.  eDNA-Earth has a love it or hate it interface that might be a deal-breaker for some, but perseverance will be rewarded as this is quite possibly the most powerful and creative instruments of its type available. It’s probably about time Spitfire ditched the old Kontakt interface and developed their own, most of their titles seem poorly suited to the sample player’s regimented interface design.

Possibly too much emphasis has been placed on patches – it would be unrealistic to navigate through them all and remember any of them for future recall. After the first 10 minutes, you are fully aware of what a monster this instrument is, though largely the patch selection is done via throwing a dart at the map and seeing where it takes you. Everything sounds immense and incredible, I just wish more focus was put into sensible layering of samples than overwhelming patch selections to trudge through.

I await in interpretation to what expansions are planned for the eDNA series, and can see an immense collection of aural magnificence in the future.