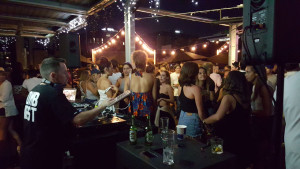 Featuring the city’s best DJs the old number 7 Sale St now called Sweat Shop was heaving tonight as punters faced the clement Auckland night to revel in Boxing Day festivities. The venue was a different scene by night with Auckland’s ‘hypodermic’ Sky Tower the background heralding the night’s proceedings. ‘Playing the shit you actually want to hear’ Shenanigans, the monthly Sunday party founded by musician David Dallas & friends, has rapidly become an Auckland institution for the music minded. Last night’s ensemble put together with a bunch of their favourite guest DJ’s from events past for one big Boxing Day special knees-up.

Kicking off the late night procession in the arvo was Team Dynamite’s spin merchant Haz Beats, Mai FM terror on the mix tape DJ 09 held the crowd with his energetic late spot, while regulars about town CheKamikaze & Gregg Harper made sure the night spot was pumping & the masses catered for with their energetic sets going down like a medicine with the crowd, intent on dancing the night away in the intimate outdoor surroundings. 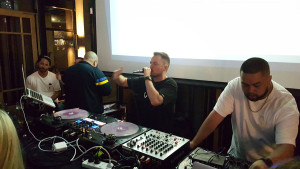 Special guest P-Money needed no introduction as he slotted straight behind the turn tables treating the now visibly warm audience as he turned up the tunes in his well-constructed set. A touch of retro sparkle on Belle Biv Devoe’s Poison, 21st century smooth including Drake (how could you not?) & 90s nostalgia including his smash hit with Scribe Not Many, the latter song had every tattooed & non inked arm fist pumping the air.

It was great night accented by a varied style of music that has made Shenanigans a great place for Aucklanders to be at on the weekend. It was also a good opportunity for the boys to get some last minute time in before this week’s Rhythm & Vines Festival, but as if they need any. It’s what Aucklanders need, a great concept that has come from a response of a flagging gap in the market. If tonight’s soirée was any indication, Shenanigans is well and truly alive