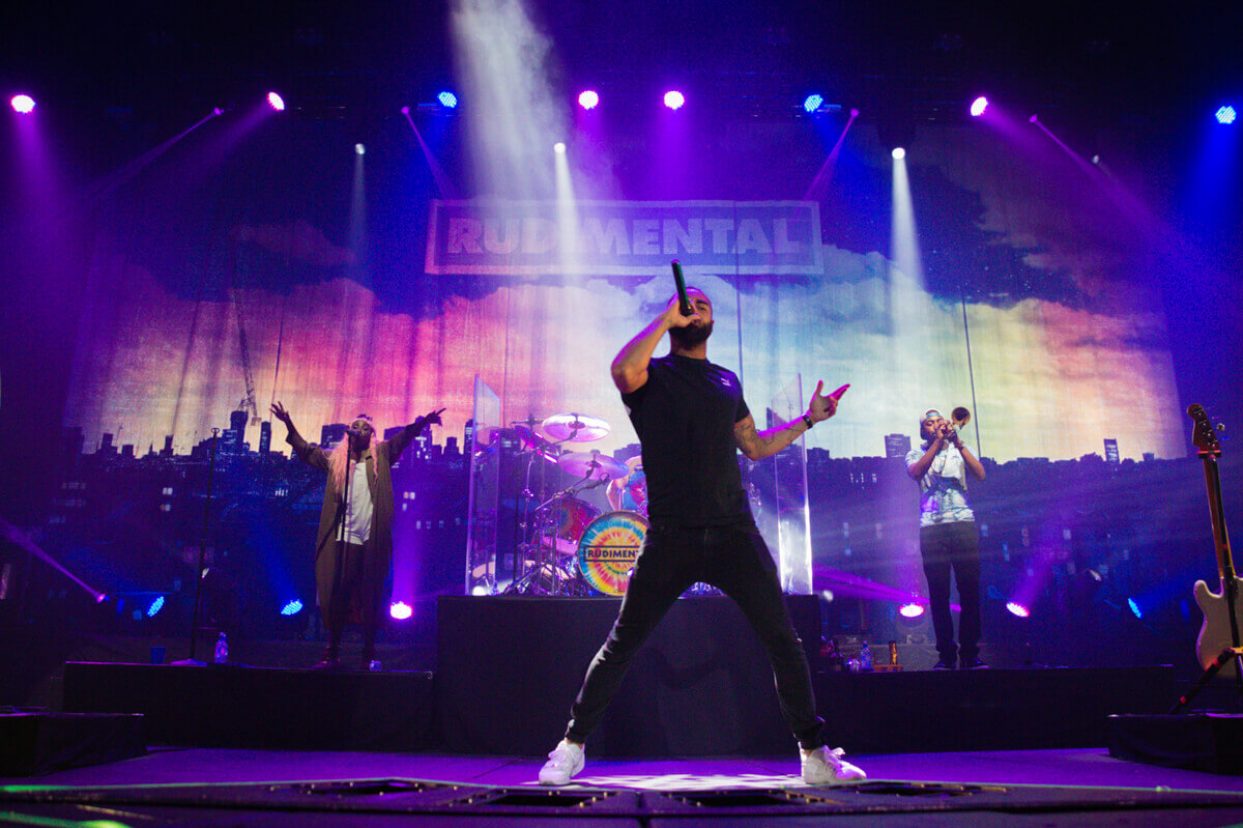 It’s easy to say Rudimental’s music has set the scene for Kiwi nightlife, defined summer beach missions, and triggers the nostalgia of last winter’s snow season. Although they are well known for their collaborations with artists such as Ed Sheeran, Ella Eyre and Dizzee Rascal, they completely held their own at Vector Arena last night.

Seeing all the back packs, snap backs, and crop tops was like RNV never finished. The venue was buzzing with hype as seats started to fill, not to mentioning witnessing pre-show jitters as three girls ran out of the bathroom stalls yelling “you don’t need to wash your hands!! Hurry up!! “– apparently eager to catch the first act Sachi.

I was given a much better show than I had anticipated. Knowing that Rudimental consists of 4 core members, Amir Amor, Piers Agget, Kesi Dryden, and Leon Rolle I thought I was in for a glorified DJ set but BOY was I wrong! As the lights start to swell and the crowd erupted with sound we are graced with an 8 piece powerhouse. Keys, Keytar, Drums, Drum pads, Synths, Guitar, a Trumpet and 4 vocalists and yet everybody in that group was a fuckin’ star – welcome to last night’s biggest party in Auckland City.

So what is a Rudimental party like? Well, they are kind enough to warm up your soul with two DJ sets, Sachi (a 21pilots looking, white on white coordinated duo), followed by The Peacekeepers, bringing the bass and extending the hype.

Your hosts are eight charismatic individuals, who love to roam the stage and seem to have as much fun and energy as the crowd is giving back to them. They’re the kind of band whose talent is monumental and unfaultable even with the little dance numbers that were straightforward and loose enough to recreate with your mates at home. Vocals were reaching Mariah Carey highs and soulful lows, and the famous trumpet lines were scatted along to by the writhing crowd and the tie-dye drum kit blasted out grooving solos. The presence of real instruments and talented musicians filled their music with such an energy that even the seated patrons didn’t all stay seated for long.

Traditions created in the Stadium Rock days made their way through to Vector last night, with flying bras, lighters in the air and an attempt at crowd surfing (wasn’t me I promise). Shoulder riders were lifted up high, though according to our lovely security team, the shoulder ups were a bit of a health and safety risk, thanks for looking after us guys! But try controlling the sheer amount of shoulder riders during ‘Free’ – Solidarity in numbers, right?

I’m also starting to think sudden spike in gym culture may also be in correspondence with the need for stamina at the best gigs in town.

If you didn’t come home covered in sweat and Redbull Vodka, you clearly weren’t part of the party last night.

Flailing arms spilt drinks and were an excellent opportunity for a pulp fiction twist if you were that way so inclined.

The end of their set wasn’t even that sad. There was no Semisonic ‘closing time’ to remind you it’s over, and you’re tired and ready for bed. Instead, they played the crowd out with September by Earth Wind and Fire which of course meant that most people either danced their way out of Vector Arena or stayed around for one more cheeky boogie – myself included.

LOVE OUR PHOTOS?  CLICK HERE TO CHECK OUT THE FULL RUDIMENTAL PHOTO COLLECTION FROM BRAD HOLLAND

What did you think of the concert? Our Review? Our Photos?  Have your say below in the comments.