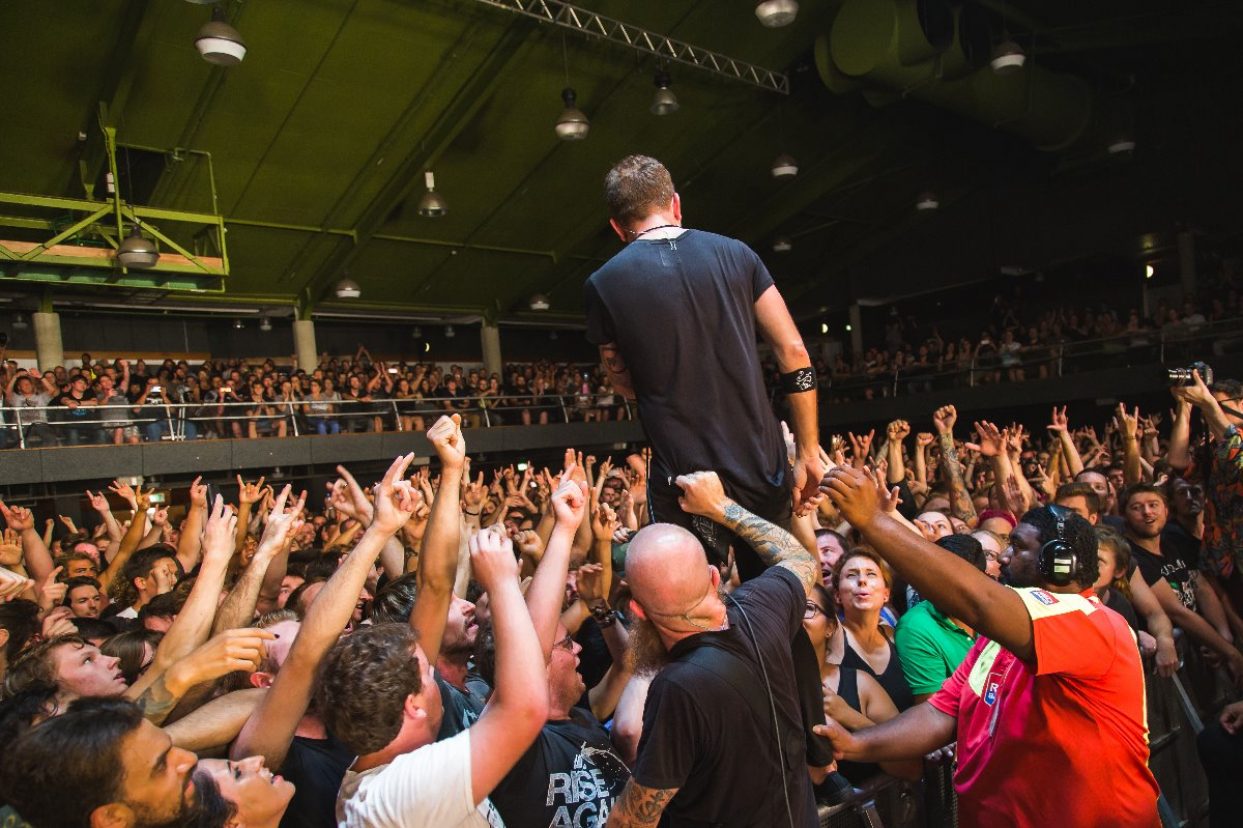 So I wasn’t quite sure what to expect tonight as I hadn’t been to this venue before. As I waited in line for tonight’s show I could see it was going to be interesting based on the type of people who were showing up. Rocking metalheads!! Yes, tonight would be a great night for sure!

And I’m in!!! Now the only question is to decide where is the best place to be for the gig; downstairs mosh pit??? Or upstairs with a great view? I decided to check out the mosh pit! Listening to the opening gig Berri Txarrak, a Spanish Basque rock band formed in ’94, man did they have an opening! And it was a perfect way to get the crowd going!! Still not too many people yet, but it is only 7.30pm after all, the night was still young! After the first 2 epic songs, I decided I wanted to see how upstairs was as man, was I getting pushed around while everyone was rocking out! Upstairs had the perfect view and felt like a better sound so that was me. These guys really interacted with the crowd, teaching us 1 2 3 4 in their native language which helped with the next song! When they were ready to finish up and go off they had a small chat with us and said this was their last night on their tour and that we were the best crowd to finish on, so Berri Txarrak, you’re welcome!! We were happy to rock on down with you!

Small intermission while the next band set up, Dead Favours! Boy, was I excited to see these guys live!! The Kiwi alternative rock group formed in good ol’ Auckland in 2016, hit the stage running! With an amazing lights display and yet again fantastic interaction with the crowd, they certainly stepped up the energy for the night. This was great, as by now more and more people were turning up getting ready for Rise Against to kick off. Not only were theirs lights display even better than before, they also got the smoke machine going too! That, along with the great colour lighting just made it look amazing! Listening to Dead Favours live was pretty much just listening to a way better version of the radio, they were all on key and played brilliantly! Playing all their radio classic, I was super stoked to hear them play! Closing out with a bang, we were all so excited and hyped up, perfect for the main event of the evening, Rise Against!

While they set up, most people were having a decent drinks break and re-positioning themselves to make sure they had a prime place for Rise Against, getting ready to Rock on out!

On stage they come and wow… strobe lighting, blue lights flicking to the beat, epic drumming my god this was exciting!! The best way for an opening performance. The crowd goes wild and they play their song “The Violence”. They have so much energy and everyone knows the words singing along. Not only do they have amazing lighting also, but they have an almost laser lighting effect which really set the scene an made you feel even more excited. Interacting with us all again, what more is going to happen tonight I’m too excited!! With all this high energy onstage and the mosh pit in full force, they took a short break. Crowd chanting, Rise Against, Rise Against, We want more, We want more…. And after 10 mins of stage changing, they did come back on! However, took it down a small notch to play some amazing acoustics instead. 4 songs and the crowd still loves them, has to be a good thing right??!!

As the night sadly now starts to draw to an end, they are back in full force hyped up, energised, crowd rocking on out, how else can you describe it other than you really did have to be there because I was so blown away! Signing off with a favourite of my own, Saviour, I was ecstatic and so was everyone else around me. One of the biggest round of applause and no one wanted to leave. Could you blame us?? Who wants to go when they sign off on a high note like that!!! Way to go Rise Against, you totally nailed it! Please come back again and soon!