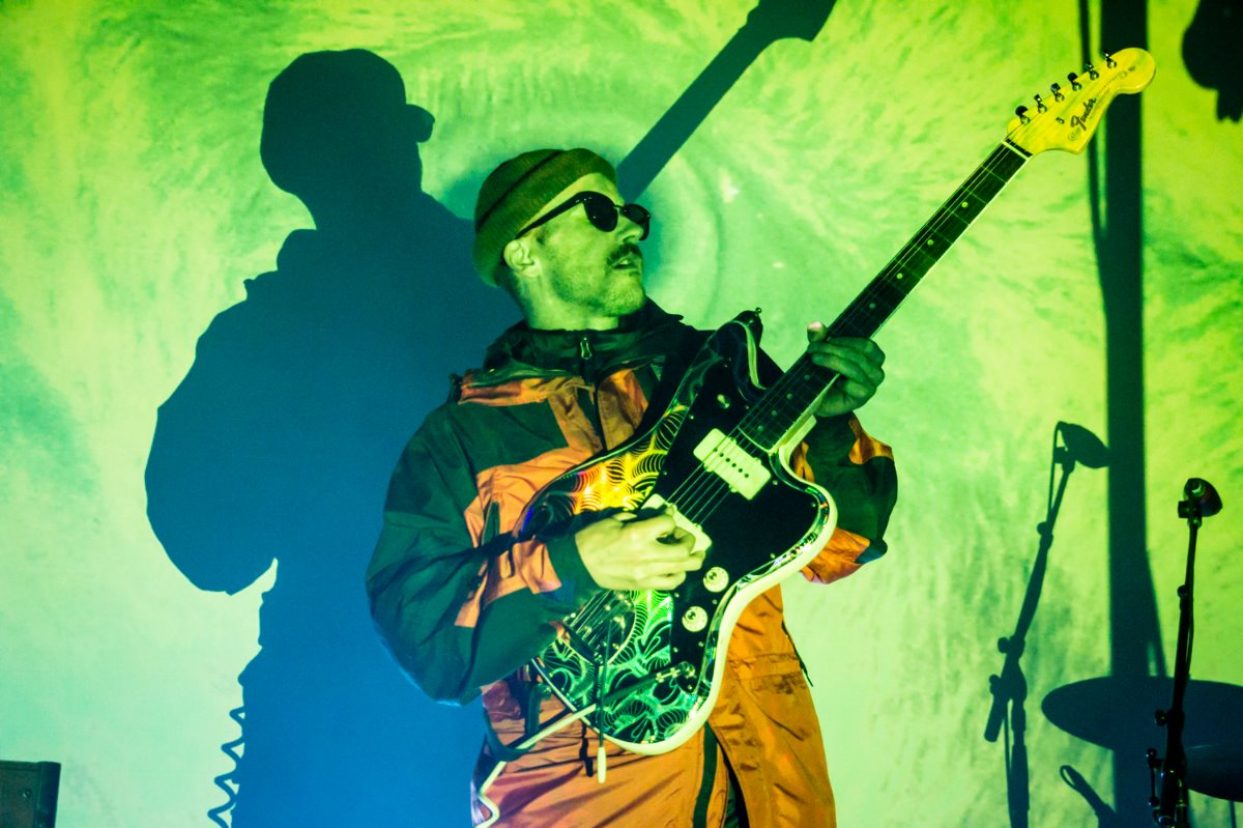 Another cherry ‘popped’ seeing these two at last night’s gig at Auckland’s Powerstation, New Zealand’s Pop Queen Theia, and Alaskan band, Portugal. The Man. It was an experience for all the sensory receptors. If you ever get the opportunity to see either of these acts live, I recommend doing so with the best opportunity of enjoying them by getting up front to join in the party.

Auckland’s Powerstation is a great venue to see live bands. The intimacy of the space allows for each musician on stage to both smash and nail their sound.

Opening the night was Theia, a 2017 VMA finalist for “Single of the year” and “Best pop artist”, if you haven’t heard her name yet, you will shortly. The electro-pop singer has a distinct sound with smooth husky tones that take you to another dimension (which is fitting as her stage name comes from a Titaness in Greek mythology).

The craft that comes from being an opening act is truly one to admire. Recognising those Rockstar curls and that five-stringed bass, I had first seen Marika Hodgson when she supported Hollie Smith at Homegrown. Her look and sound had me wanting to go on a date with her then. I still do! Leading off her electro sound, the keys are played with serious soul and rhythm. I still can’t comprehend how much Em-Hayley Walker suits her stage name Theia. Her voice is incredible.

Her music has similarities with the raspiness associated with New Zealand’s biggest and most successful pop star Lorde. She has the capability to reach those heights. Not to mention she looks like a goddess. She could be a great role model for young women. No need for exploitation. It’s all in her gift. Her savvy fashion sense is a bonus. Theia finishes strong and set the bar high for what is to come. And with the number of towels that are placed by each instrument during set-up, the stamina for the main act will be put to the test.

Portugal. The Man began their set through visual aid of music video for their most well-known hit, Feel It Still. This was supported by snippets of ‘90s cartoon icons duo, Beavis and Butthead. This is totally Portugal. The Man. When the band accepted their Grammy for “Best pop duo/group performance” last year they replied by insidious behaviour yelling, ‘Hail Satan’ and wiping the award on their bum. Definitely not in it for the glory, I’m thinking.

The Band looked great. I’m in love with what Kyle O’Quin is wearing at the keyboard. His pale blues and whites are so un-rock’n’roll that it’s kind of cool. The fact he also has four keyboards surrounding him, also gives him that impenetrable god-like appearance. Lead singer and guitarist John Baldwin Gourley looks dressed for Alaska conditions (I’m sure NZ autumn weather would be much warmer) with a snow jacket, beanie, Tom Selleck moustache and sunglasses. He rocks the jacket through most the show but takes it off for the last few songs. Being so lit (as the youngsters of today say) is pretty hot work it seems.

Guitarist Eric Howk is hot to watch. Paralysed from an accident 10 years ago, his skills on the guitar are awe-inspiring. I could’ve stared at him all night (You will get a lot of that when a woman is review a guy band). You can see him totally at the moment, at one with his guitar. For me, the drummer (especially with this band) has the biggest role and works the hardest. Jason Sechrist, in particular, was entertaining to watch, you could see everything he was thinking or feeling by watching his face. His connection with the other band members was made through serious eye contact and laughter. It was pretty cool to watch.

The band used the projector to interact with the audience. Literally, a slide came up with; ‘We are not very good at stage banter so tonight’s performance will feature slogans written by our management. Thank you for your continued understanding”. A nice touch was bass man Zach giving us a ‘Kia Ora’ while letting us know how much he enjoys the Kiwi weather and is keen for a house party afterwards.

Bassman Zach Carothers was amazing. Working the bass better than most I have seen. Throwing it around, making solid rhythms and even time for a swig of Jamiesons straight from the bottle. He multitasks with a tambourine and is just a solid entertainer. Not to mention the dreamy harmonies by Zach and the band. These guys create their sound with influence and appreciation from the likes of Bowie and Pink Floyd, so starting with a medley beginning with Another Brick in the Wall was simply amazing – Tumeke.

Portugal. The Man’s vibe is catchy. I’ve heard the songs heaps, but not enough to know every word (I’m super jealous of the man next to us who knew every word and beat). However, their songs make you confident enough to join in with the crowd with the words you know and attempt the ones you don’t. During the night the tempo and mood changed in a heartbeat. One moment you are rocking a mellow head rock, the next you’re shaking your head and throwing your arms side to side.

The graphics on the big screen also influence how the night is going through its frenetic flashing. Actually, the graphics themselves could be a work of art. Non-binary mannequins doing actions that some people only see when taking something a lot stronger than your Nana’s medical valium. The show itself is one big spectacle and makes you wish you were in that state to truly experience it.

The band finish up the night with The Beatles’ classic hit Hey Jude. It definitely deserved the encore and the band rocked it out with three more songs – bonus.

Portugal. The Man are something unique. Their ability to win a Grammy just shows their musical prowess. They totally consumed the pop audience with “Feel it still”, however, this gig with their sensational jam sessions showed us how they are also great contributors to the genre of Rock.