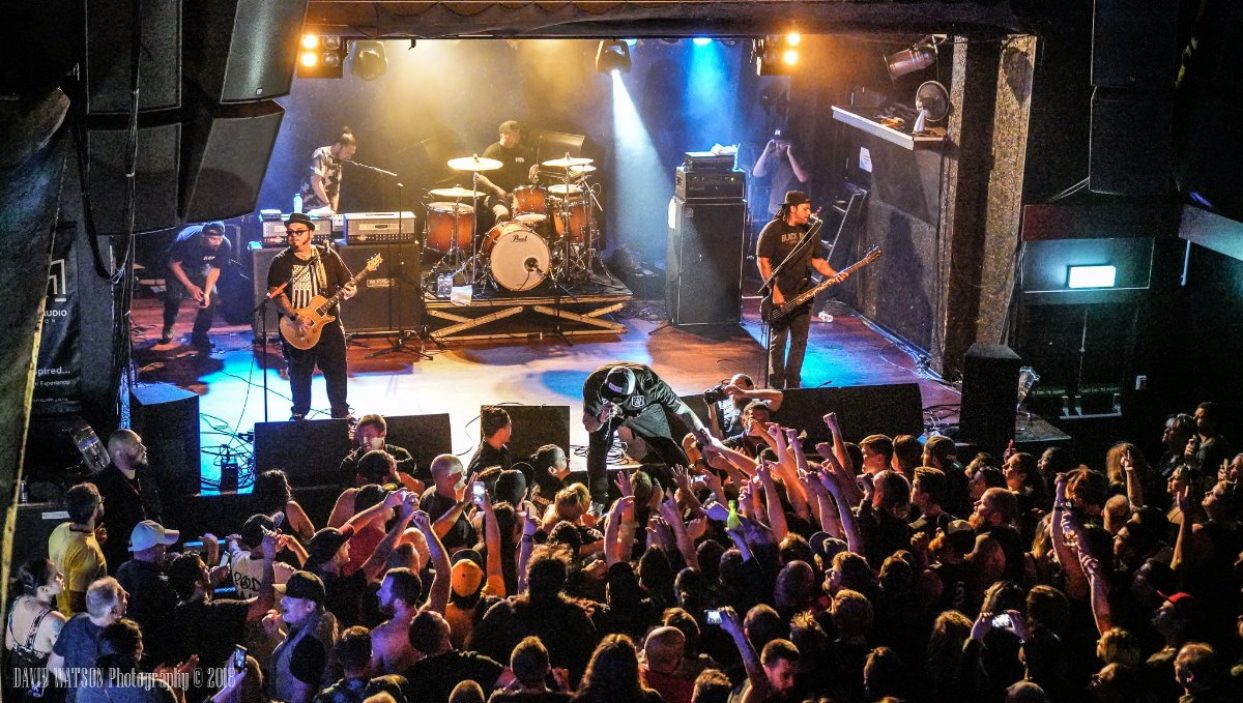 As The Studio slowly started to fill up I knew we were in for an eventful night. Just as I made my way to the front and just off to the side for a great view, Armed in Advance kicked. Hailing from Auckland the 3-member Rock band had great a sound and played really well getting the small but expanding crowd in the mood for what lay ahead.

Up next was local rock heroes Coridian. The guys shook it up to the next level and got everyone revved up, just like a decent support band should do.

Lead singer Dity had so much energy I swear he had energiser batteries somewhere to keep him jumping around the stage for the duration of their set! His smooth vocals were let down by a bit of feedback for some part of the set, but his professionality showed and it never affected his performance. So many catchy tunes and they had a massive following there, including but not limited to, a group of girls right up front and centre hanging off every word they sang while singing along themselves. Least to say they were big fans!

As they wound down for the night and got ready to introduce POD as the next gig, the place was pretty much packed to the rafters and anticipation and excitement was in the air.

With a quick break POD were sound checked and ready to roll. Opening with ‘Set it off’, the crowd were almost uncontrollable as a mosh pit quickly formed in front of me.

This place was really about to go off!!

Welcoming the crowd and announcing they were happy to be back here after so long, the show was underway. ‘Alive’ played as their second song, the audience lost their shit in a pure frenzy, moshing everywhere, drinks being spilled, people having the time of their lives.

Right into their next song, ‘Boom’ lead singer Sonny Sandoval got right up close and personal with the front row, so much so he almost fell right in with them!! Reaching out and shaking hangs with everyone, they were all lapping it up and moshing and trying to get him to crowd surf. It was quite spectacular.

With great lighting helping to rock the place down, there was no stopping them now as they went right into the next song. And another I dare say most of you will all know, ‘Youth of the Nation”.

There was not a single person in the room that didn’t know every single word to this song, so Sonny let us take over and sing for him during some parts. It was awesome and POD loved it just as much. Having performed in NZ 16 years ago, it was well overdue that we would all be there singing right along with him in a great classic song.

With a quick break while the band keeps playing and Sonny takes a small mouthful of water, some lucky front row fan was then given his drink bottle of water, to which this person was super happy to receive.

Heading into a more slower song, they all took a moment to talk about how the world had changed and in a lot of ways not for the better. So, while the band played Sonny was arm up, eyes closed feeling the lord with him in that moment. Judging by how the audience has now slowed down a bit during this time, they stepped it up and cracked into an upbeat song. However, not only were they ready for some energetic fun, they got everyone in the crowd to make a circle and them boom!!!

Mosh pit circle of craziness and literally enter if you dared!!

People going all over the place, while the band just keep rocking on out. It was quite the spectacular performance by the crowd to have done. Now the night is coming to an end, with Sonny announcing they will literally keep playing until they are kicked out, which eventually they stopped playing and called it a night.

So many fans were just so happy to be there and see the Christian nu metal rock band, Payable on Death, POD for short, rock out in an energetic and hyper show tonight. Not a single person was ready to leave and rightly so, their vocals were still on point, their music still sounded exactly the same.

What more could you have asked for in a night?

Love David’s photos?  We do too, that’s why you can see many more from the gig right here on our archive page