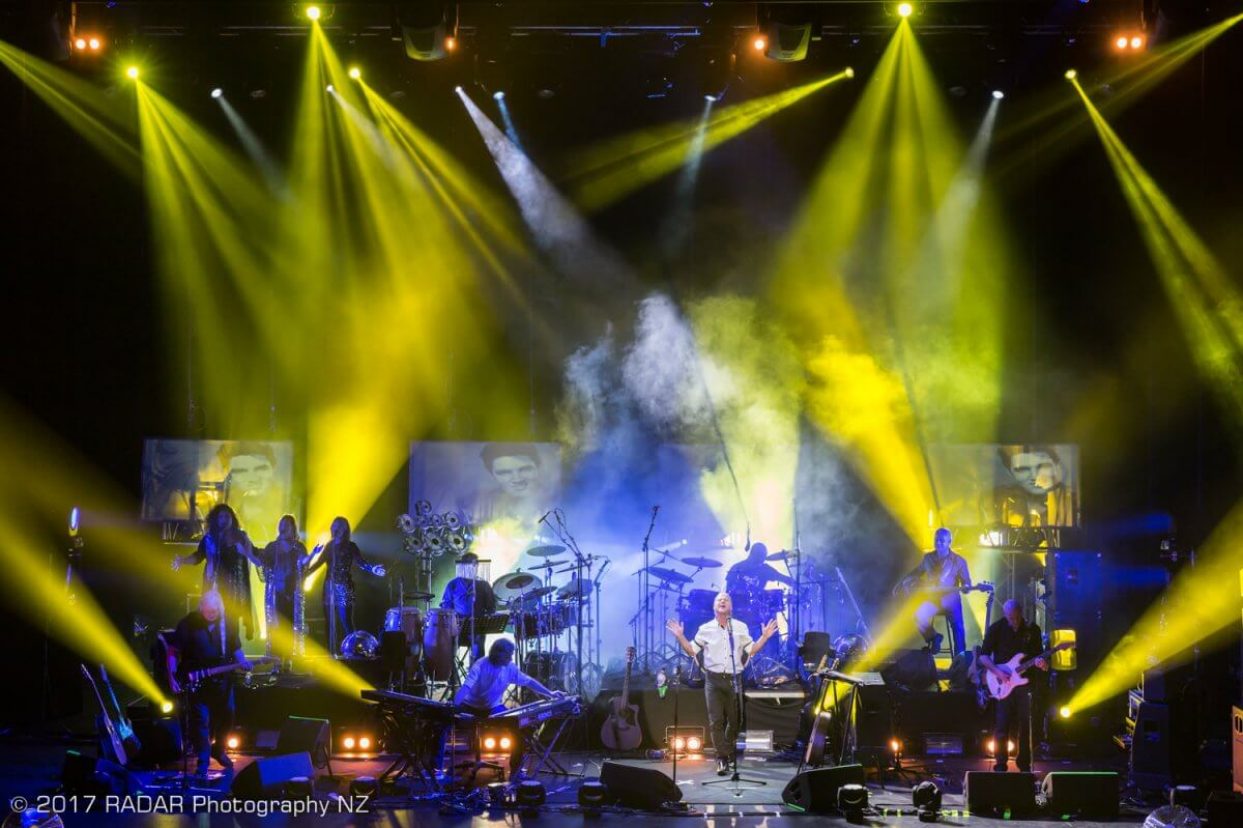 I had the pleasure and privilege of joining “The Pink Floyd Experience” (referred to going forward as PFE) over both nights on the Wellington leg of their New Zealand and Australia tour to celebrate the 40th Anniversary of Pink Floyd’s Animals album (23rd Jan 1977). In addition, this year also marks the bands 20th Anniversary playing together as “The Pink Floyd Experience” which if I understand correctly their first gig was at “The Big Chill” in Lower Hutt way back in the late 90’s

REVIEW AND PHOTOS BY REEF REID

As I was also accredited to photograph both show(s) I arrived early to meet some key individuals and familiarise myself with the stage access areas. During this time I witnessed the crew going through the final stages of preparation for show time. The band is just fantastic, that is really what I think, but behind all great live performances is a great crew and this is especially the case for the PFE. The crew that I met were very welcoming and I reciprocated by following their instruction which essentially meant keeping quiet and out of the way. Their crew controls all aspects of the show from sound, lighting, laser, video, merchandise and food. They are proven in their respective areas of expertise that contributes significantly to the overall success of “The Pink Floyd Experience” in unison with the band’s performance.

On this tour the show consists of three classic albums that all Pink Floyd fans will appreciate. “Animals” (1977) which is the focal point, “Dark Side of the Moon” (1973) and “Wish You Were Here” (1975). It is in this order that the show is presented over 3 and a half hours which is justification alone for the ticket cost. 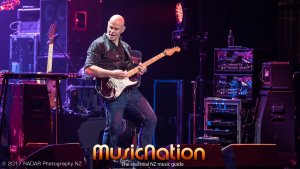 8:00pm rolls around and without the need for a support act the band takes to the stage for the start of the Animals set. If you follow PFE you’ll be aware that Stan Gratkowski is the lead vocalist, but in this case the Animals set begins with Rob Ju out front on lead vocals and guitar with Stan swapping places and beginning on drums, showing just some of the versatility this band has. Rob is well versed in multiple instruments and has even crafted some of his own drums. Rob returns later in the show to perform Welcome to the Machine and does so very capably.

The Animals set comes with quite a unique presentation and rather than detail that here and spoil the show, I encourage you to head along to and check it out for yourself! At the completion of the Animals set is a brief pause before launching straight into “Speak to Me” and therefore the Dark Side of the Moon set. Taking nothing away from Animals, this change is met with immediate and vocal approval from the sell out audience and this was reiterated when the beat dropped on “Breathe”.

Ken (Rumblefoot) Te Tau with Rob Ju is responsible for keeping time and rhythm as he sits atop of the stage surrounded by his weapon of choice, a number of Music Man Stingray 5 bass guitars. Ken’s physical spot on the stage coupled with his relaxed demeanour and solid playing, projects as the Koroua or elder of the band. A reference that I use with respect.

During “On the Run” the audience is treated to one of the many light shows which I overheard somebody during intermission describe as “Mind Blowing!” to which I have to agree. It’s clearly evident that Dark Side of The Moon is a favourite album with the crowd and in particular “Time” where once again the auditorium is full of audible approvals when they hear the clock chimes as Jeremy Fitzsimons on percussion plays the fills on the rototoms. Percussion features throughout Pink Floyd’s music and Jeremy with 25 years experience and as the principal percussionist for Orchestra Wellington has this area well sorted. 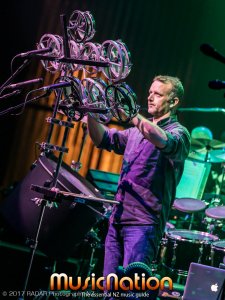 “Great Gig in the Sky” featured the backing vocal powerhouse trio of Kirsten Te Rito, Wini Baxter and Bella Kalolo. The vocal track in this song made famous by Clare Torry is a formidable number to re-create well. Wini begins and it’s at this point that audience appreciation for the show kicks up another level. Kirsten continues the vocal track and then hands over to Bella to complete it. The three women absolutely nail this powerful rendition. During their part of this song a few band members have the opportunity to move off to the side and I witnessed Marty (Stratman) Mitchell stage left, hidden from the audience and absolutely getting into it while providing visual appreciation to the trio as much as any of the audience which I thought was quite respectful and completely appropriate.

“Money” and “Us and Them” features Roger Rangitawa who is an accomplished multi instrument player, teacher and vocalist that plays with a number of different artists in various genres. However, on this tour it is his saxophone playing in the spotlight which was met with applause from the crowd and for good reason, it’s bloody amazing! All Floyd fans are familiar with the iconic Sax pieces particularly on “Dark Side” and “Wish You Were Here”. From full on during “Money” and transitioning to the very calm and stark contrasting “Us and Them”. The band acknowledges Roger on entry/exit, as does the crowd.

Glen Ahearn sits centre stage right in the thick of it with his three keyboards that he is continuously moving between which is of no surprise given that keys feature significantly in Pink Floyd music. In fact, I would have to say that Glen was one of the most animated throughout the show(s), or certainly appeared to be to me and possibly due to the emotion that he translates outwardly where at one point he was nearly lying on his keys!

A short intermission takes place at the end of “Dark Side of the Moon” and the band along with patrons disappear for refreshments and a stretch. I head out to the foyer to check out the merchandise stand and there is a steady flow of interest. At this point it is evident how much the crowd has enjoyed it as I overhear accolade after accolade while I internally concur.

On return, the familiar keyboard start of “Shine on you crazy diamond” is met with more audible approval from the audience and features Darren (Daz) Whittaker playing the iconic guitar parts and once again getting the crowd excited after the initial slow solo followed by the iconic subtle four note piece with a pause that sends your blown mind back to the opening track at Earles court in 1994. The return to the stage of the powerhouse backing trio confirms the transition that is about to take place as you prepare your senses accordingly. 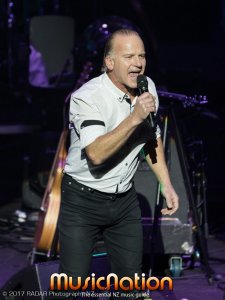 I thought Rob Ju’s lead vocal performance in “Welcome to the Machine” was outstanding and really did the track justice. “Have a Cigar” was an interesting performance and it was cool to see Stan’s interaction with almost the whole band and in particular with Glen which made for more good photographs. It is also one of the few times that somebody other than Roger gets to move freely around the stage. During “Wish You Were Here” the dual guitarists are literally in the spotlight. Marty and Daz cover all parts of the show amazingly, but in particular on this tack.

At the completion of this album Stan once again addresses the crowd (for the second and final time) to remind us that they just played three albums back to back. The show is performed in seemingly less time than the three hours that just past. Thankfully they weren’t done yet with an encore (without leaving the stage) of three great tracks, “Learning to Fly”, “Comfortably Numb” and “Run Like Hell”. (With a huge back catalogue to draw on, expect that these may change throughout the tour)

The lighting and lasers during the final three songs is incredible, particularly during the second lead break of “Comfortably Numb”. The photos don’t portray this entirely as it is something that needs to be witnessed live. At the completion of the show, the band acknowledges the audience and the house lights come up to an equally appreciative audience who by his time are on their feet.

Because the PFE has been around for 20 years it is more than likely a number of people have seen them before, myself included. You therefore might be thinking you don’t really need to go again and I encourage you to reconsider. I myself have seen their shows twice before, but this show is something else that is worth experiencing, because that’s what it is, a three and a half hour audio, video and lighting extravaganza. The band just played its last show here in Auckland and now heads over to Australia for nine dates with another possible Auckland show on their return to New Zealand in July.

The two Wellington shows , in particular, ere special with the bands’ ties to the Wellington region. This was evident with the presence of whanau and friends in the audience and back stage prior and after. It was my pleasure to meet and capture The Pink Floyd Experience doing what they love and do well. I eagerly look forward to seeing them again in the future.