Wayne Bell & Andrew Thorne are no newbies to the music industry, or creating music at that. Quite the opposite in fact. Between them they’ve played on records and in the touring bands of New Zealand rock royalty Tim Finn, Dave Dobbyn, Bic Runga & Gin Wigmore, just to name a few.

Now joining forces to form duo – Modern Chair, these two creative veterans are just as high up on the scale of rock royalty themselves, as the one’s they’ve played with.

With three songs to the Modern Chair name so far, their debut single ‘Tokyo Compression,’ a dirty, frantic, foot stomping rocker of a tune which includes gritty, fuzzy vocals that peak throughout the immensely catchy and shouty chorus, perfectly encapsulates what this duo is about. As Thorne states, “the modern age seems to be about celebrating individuals in ‘art.’ I’d like to think Modern Chair is about celebrating the art in individuals.”

“What’s ultimately satisfying is a groove, a melody that gets stuck in your ear and a band that makes you feel like you’ve arrived home,” Bell points out, and this couldn’t be a more truer depiction of Modern Chair and the rock-tastic ‘Tokyo Compression.’

Even with an outstanding vintage music video that transports us to a frenetic 90’s Tokyo subway which echoes the urban frenzy of the track, the pummelling drum beat and combined grittiness of the vocals and fuzzy bass, compliment one another impeccably, as the groove very much sinks into every part of your body. 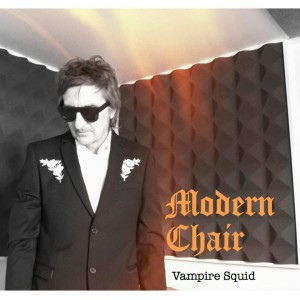 Following the release of ‘Tokyo Compression,’ it was only a matter of weeks until the duo hit the scene again with their thundering follow up single, ‘Vampire Squid,’ which for a first see’s Bell take the reigns on some lead vocals.

Returning with a fizzing and booming riff, ‘Vampire Squid,’  hits you hard in all the right places.

The vivacious drum rhythm is back bigger, bolder and better thanever and the grungy guitar riff is the icing on the top of the cake alongside the electrified lyrics and vocals which ring true to that blaring, scuzzy Modern Chair sound we’re very much getting used to and enjoying.

With the music video showcasing their continuing obsession with Japan, the visual aid that accompanies the energetic ‘Vampire Squid’ is filled with impressive old school footage from the 1989 Japanese cinema masterpiece, ‘Tetsuo: The Iron Man.’  In terms of a follow up single, we very much approve of ‘Vampire Squid’ and Modern Chair’s gritty style of rock, (and a thumbs up to Bell for getting behind the microphone for those vocals too!)

If you haven’t got the picture by now, Modern Chair don’t mess around when it comes to creating and releasing music. With just another few weeks on from the release of ‘Vampire Squid,’ Modern Chair churned out their third single ‘Sending the Sun’ which may just deserve an award for the coolest and craziest song and music video accompaniment.

Adding yet another dimension to their fuzzy onslaught of perfected dirty rock, ‘Sending The Sun’ is another Modern Chair track filled to the brim with grit, guitars, drums and attitude. With an addition of synths which boosts the tracks electric energy, the distorted vocals and prominence of the slightly slower paced vocals and reverberating guiar riffs, takes the song to new heights with the ongoing pummelling of those classic Modern Chair pounding drum beats in the background.

This time featuring footage from the 1977 Japanese cult classic ‘Hausu,’ bears and cats rule the single’s music video with the odd appearance of Bell & Thorne doing what they do best.

In light of Modern Chair still being a newly formed duo, it is clear these two know what they’re doing and have so, for a long time. Their creations thus far all over-flowing with energy and electric fuzz, give no reason for me to think these veterans are planning on slowing down anytime soon, and with being the early days of Modern Chair, I certainly hope they don’t.

Keep up to date with all things Modern Chair on Facebook  & head to iTunes to download ‘Tokyo Compression,’ ‘Vampire Squid’ and ‘Sending the Sun’ now!