FOR NATIVE INSTRUMENTS KOMPLETE KONTROL NKS 1.5 and up.

FOR NATIVE INSTRUMENTS KONTAKT AND KONTAKT PLAYER 5.1 and up

Sonokinetic Maximo – The Next Level

Every now and again we get a product through the Music Nation studio that’s a little left of field. Dutch software developers Sonokinetic are leaders in the phrase loop orchestral libraries, so I’m excited to dig into this one for something a little different. 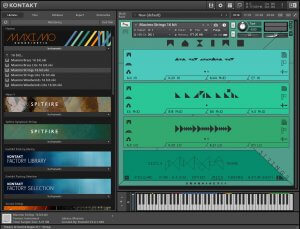 Sonokinetic’s Maximo is the latest offering from the company’s range of Kontakt based orchestral loop libraries.

It is a collection of pre-recorded loops at its heart, with a clever interface allowing you to mix and match each of the loops to create grand orchestral passages, with key articulations to modify the sound and rhythmic elements on the fly. As the name suggests, Maximo is the action and power orchestral collection of the bunch, constructed as 4/4 time signature vamps at a romping 130 – 140 BPM.

A huge 101-piece orchestra is included, when installed chews up 50gig, so yes – it’s big. Included are 60 string, 22 brass and 19 woodwind players as ensemble groups, and unfortunately, there are no individual instruments. The orchestra is divided out into three colour coded patches – strings, brass and woodwinds. Each patch is divided again into three zones – low, mid and high, each containing 4 tabs with arrangement presets contained, though you can mix presets up as you see fit. The instruments follow typical orchestral layout, and according to the seating plan, the strings have basses, violas and violins, woodwinds the clarinets, flutes and bassoons and finally the brass French horns, trombones and trumpets.  The layout isn’t terribly important as the library is meant to be played as an ensemble, though if you’re layering over 3rd party instruments it’s handy knowing the seating arrangement.

Sonokinetic has the foresight to have recorded all of their performance libraries in the same studio, so you’ll have no problem intermixing other Sonokinetic libraries into your project.  Maximo offers both 16 and 24-bit version, with lite stereo mix versions of each section to preserve CPU power while you compose. Each patch includes global volume, pan, x-fade, offset, mic, tuning and harmonic shift settings.  Most are self-explanatory, with offset allowing you to delay or advance the start point of the loop resulting in interesting rhythmic variations. The mic setting features a sliding scale choice between Decca, far, wide and close mic positions with good definition between the states, again replicated across all Sonokinetic performance libraries. Key grouped triggers allow you to swap between phrase patterns, mute and adjust the harmonic shift from your keyboard, more on that later. 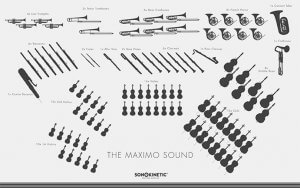 So, how does it work then?  If you’re new to this kind of platform, phrase based loops take a little getting used to, as they focus more on performance than traditional sequence step recording.

A phrase is triggered by holding a three-note chord in the play range, and this phrase is dependent on the patterns you’ve pre-selected.  Before triggering a phrase, you will need to set up initial states, such as ‘relative tempo’, volume, pan and other like controls.

Relative tempo is not to be confused with your DAW tempo. Maximo will sync to any tempo you have set in your DAW, but you can instruct Maximo to play phrases in either original, half or double speed relative to the DAW tempo. 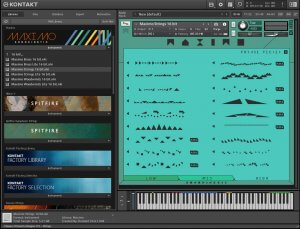 The aforementioned offset control changes a phrase rhythm relative to others by moving the start position ahead or behind the beat. Most interesting is the clever harmonic shift articulation – a nifty feature that allows you to change the relative key of a phrase while playing. The mod wheel controls the volume for any layer enabled, again giving you more performance control over the loops.

So through careful selection of phrases and manipulation of the rhythm controls you are able to construct anything from simple 4 bar vamps through to more complicated passages with melodic lines. You, however, cannot directly access the individual instruments within Maximo for solos or the likes, a second string library will be required to work in conjunction.

Playing patches is a breeze.  Each of the string, brass or woodwinds patches load with three preset layers featuring hi, mid and low instruments with phrases ready to roll. Each layer is totally independent of each other, so changing the phrase or timing will not affect the others. The most dramatic results are actually found when mixing extreme opposite rhythmic phrase with each other, for instance, a quick 16th note hi, a quarter note vamp in the mid and long sustained notes from the basses sounds wonderful.

Maximo’s interface is a little weird at first to get used to. There are triangles and boxes representing notes in the phrase with unusual icons for mute, timing and other controls. Its bonkers at first, and I still don’t know if it’s working for me, but I can see the reasoning behind it. A graphical representation of the three layers of note rhythms makes more sense when looking at the instrument as a whole. 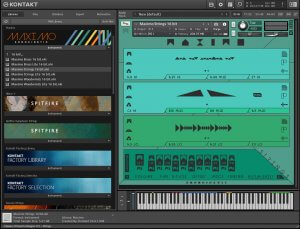 But, overly complicate UI’s aside, wow – that sound.  If you’re a fan of big, cinematic, wall-of-sound orchestrations you are in for a treat here. Loading up the default brass, strings and woodwinds together immediately shows Maximo means business. You have Mind Heist brass baaaaaaps, Hans Zimmer’s Batman strings and John William’s Star Wars woodwinds all at once. The recording quality is first class, and the loops balance perfectly together, even across patches in most circumstances. You can get the odd rhythms clash when you start mucking with the speed and offset controls, but largely everything sits together very well. Every phrase is expertly played and recorded, with a wonderful studio atmosphere that is so life-like and immersive it’ll bring you close to tears.

There is no doubt Maximo sounds incredible, beyond incredible really – the performances are larger than life, and even the wacky interface can’t distract from that.

A lot can be said about pre-recorded loops – you get the full performance and intent of the orchestra, conductor and studio environment – some that is extremely difficult to replicate with MIDI sequencing, no matter how much time you spend editing expression envelopes.

You’ll need other libraries to complement Maximo if you have any need to compose melodies, percussion or solo instruments, but as a groove generator, of sorts, this is a unique tool that will not only save you many hours of scoring time but bring a human feel that is difficult to replicate with a sequencer.

Creating epic orchestrations really is 1-click away, and you’ll find no better sounding orchestration phrase libraries out there with this level of flexibility.  Recommended.