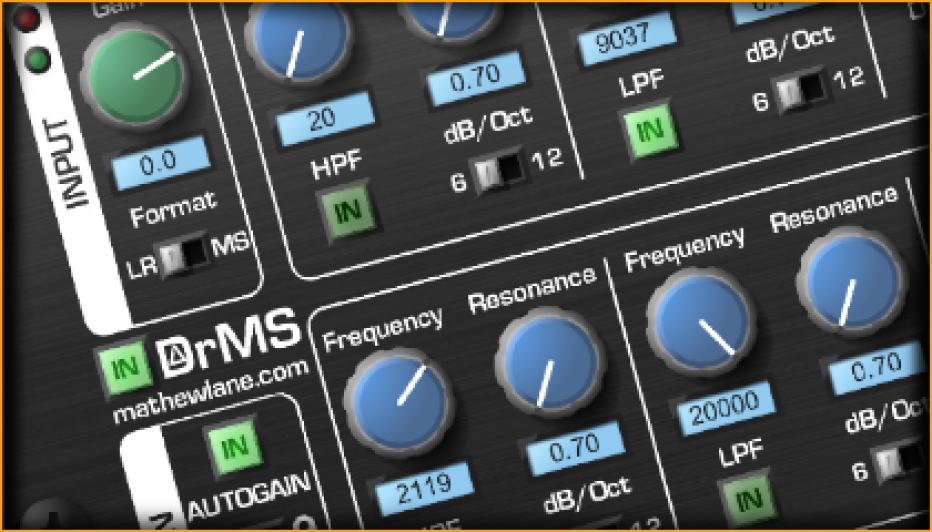 Of all the tools and engineer has available at their disposal, one of the most overlooked is the spacial enhancers, because, well – they all kinda suck. Increasing the width of a stereo signal oftentimes leads to horrible phase issues and hollow sounding mixes.

Traditionally an engineer will apply EQ filters to mould the sound into its environment, then compression to help balance it all out. With Mathew Lanes DrMS you can now not only widen and deepen your stereo field but really control the total soundstage with minimal if any phasing.  Sounds too amazing to be true, right?  Read on.

FIRST, A BRIEF PRIMER ON M/S.

M/S refers to Mid and Side, as in the middle and side of an audio signal.  M/S signals are recorded in a specific way by using a single cardiod mic to capture the mid and a figure 8 bidirectional mic for the side.  This is done to replicate the way the human ear naturally hears the sound. The mid (middle) signal of the audio is the mono centre part, what could be considered the bass of your track. The side is a specially encoded stereo signal that creates a wider signal, or air of your track.  When combined (encoded) you can achieve somewhat believable wider sounding recordings then what you might have from simply setting two mics in a traditional x/y pattern.

The mojo magic happens in the encoding – as anyone who has tried to simply pan two mono tracks apart will attest, doing so only sums the output giving you mono no matter what you do. Sure you can ever so slightly delay one side, but phasing artefacts becomes an issue and all of the bottom end can disappear.  M/S processing is useful because the separate signals can be individually EQ’d before they are re-encoded together allowing much more control over each section.

DrMS is decoder/encoder plugin that can not only deal with true M/S recordings but take a standard stereo recording and decoded it to M/S allowing very convincing results.

DrMS looks daunting at first, but if you split up the UI into sections you will see most of the controls do the same job, just in different areas of the soundstage. Once you get the grips of the basic controls everything falls into place so the learning curve is not as steep as you might think.

Working on a track you start by telling the plugin if it is true M/S or not, then choose an area to focus on – say the middle mono section of an audio track.  You might first play with the blue filter controls on the Midsection with the solo button engaged until you are happy, then look towards the Focus section underneath to further pull in the mid signal. The zoom control acts somewhat like zooming towards the middle mono signal or pulling away making it more distant sounding. After that this time, you could start on the side controls in solo mode, maybe cutting out some of the low end and using the field controls to enhance the ambience of the wide signal. Interestingly the focus zoom control effect the opposite side controls, and the field effects the opposite mid controls – some very smart processing is happening behind the scenes that reduce phasing when used responsibly.

Though of course, every engineer will have his own way of using the plugin, the basics process is to think centre mono punchy zone and outer airy stereo wide stuff. The top Mid and side controls work like any M/S processor, but the Focus and Field bring in an interesting push me/pull you processing, unlike anything I’ve seen so far. You can find yourself counter-effecting yourself if you’re not careful, but the results are absolutely stunning when used correctly.

You should be careful with M/S processing, don’t just willy-nilly chuck it over everything.  Pick and choose the elements you want to step away from the centre of your mix, such as guitars maybe or drum overheads. Sometimes just pulling back the mid-low end or tweaking the side high-end EQ adds remarkable results. Using DrMS on your reverb bus gives you way more control than simply EQing. Gentle use of the master bus can add a hint of sparkle and punch without messing with your phase.

WHILE M/S CAN BE DISCONCERTING TO LISTEN TO FOR LONG PERIODS ON ITS OWN, DRMS IS NOT INTENDED TO BE A LARGELY NOTICEABLE EFFECT – ITS ALL ABOUT SUBTLETIES.  YOU CAN REALLY BRING SOME IMPRESSIVE RESULTS TO YOUR MIX, EITHER AT THE MASTER OUTPUT ON EVEN BUS AND INDIVIDUAL TRACKS, HOWEVER LIKE MANY THINGS IN LIFE, LESS IS MORE.

DrMS’s interface will not appeal to everyone, though anyone used to working with hardware rack units will feel right at home. A good collection of presets are available to get you off and running, plus of course, you can save your own.  At $230 NZD its not a casual purchase, and an additional $90 iLok is required if you don’t have one. Of course, DrMS is available on all formats – AAX64/RTAS/AU32/AU64/VST32/VST64 Windows or Mac.

Considering the vast application and flexibility of this plugin, DrMS reflects good value for money and will become your go-to plugin from now on. If you’re wanting to add some high-end polish to your mixes, DrMS is almost certainly a required tool in your arsenal.