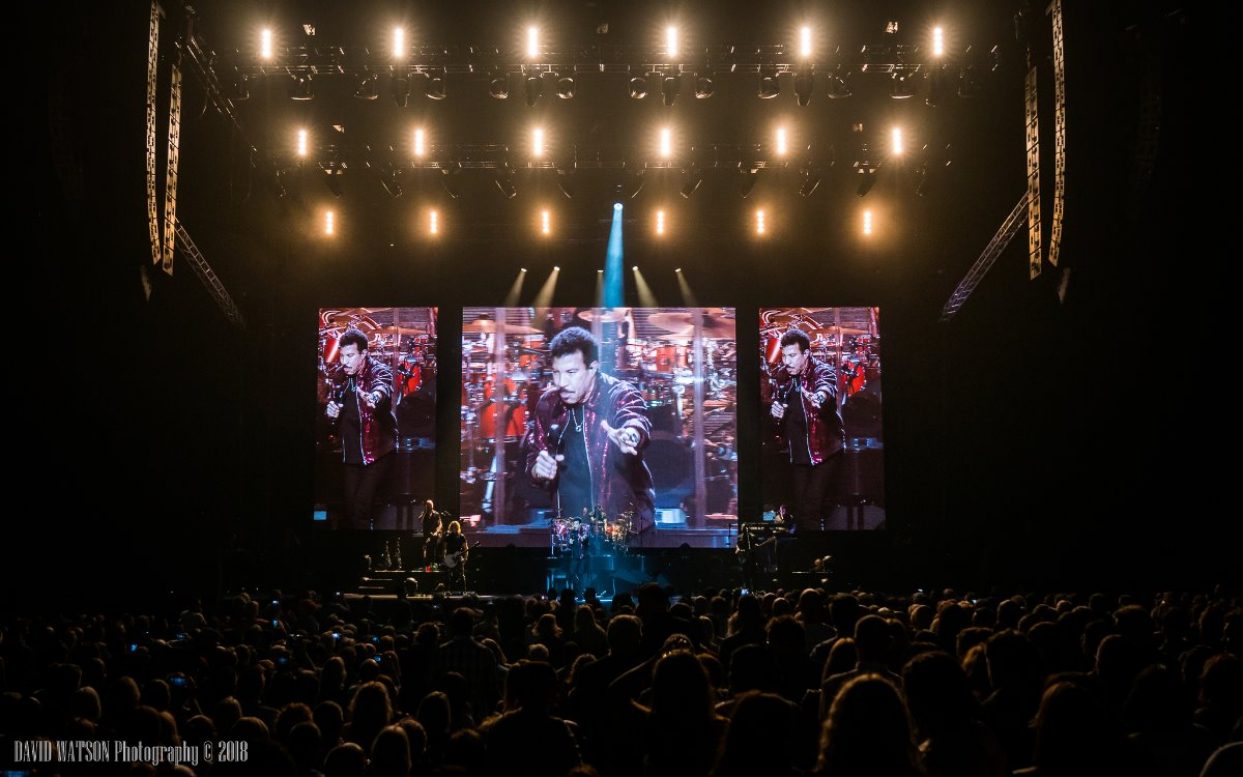 Walking to Spark Arena in the rain, along with a few other people who braved the terrible storm to come out and see Lionel Richie Live, I really had no clue what I was stepping into. Taking my seat, surrounded by some of New Zealand’s own celebs, including but not limited to Hillary Barry and Mike Peru, it made the entertainment of the evening that more real! And also that maybe he’s been around for a little while and that perhaps I was also born in the wrong decade….

Walking out on stage in his still very much 70’s sparkly red jacket, and looking very much like he just had not aged at all, the whole arena was standing in a massive round of applause. Lionel Richie was also just as excited as we were for the night also!

Him cheering us like we were his entertainment! With him getting ready to rock his own show, he sat down at his sleek black piano, and kicked the night off with ‘Easy Like Sunday Morning’.He still got it! Was so much better listening to him live, wow!! And not only was his voice still the same smooth RnB sound to it, he sounded so much better!

With a few songs in and literally not one person seated by this point, Lionel took a moment to chat with us. Thanking us for braving the terrible weather, Wind, rain, sand, fire, and yet here we all were ready to party with him. He was very humbled and also had a childlike excitement as he was ready to perform, so in his element.

While taking this time, he made sure to say that not only were there a few people in the audience he knew, but sitting front row and centre was a minister! How he had seen it all! In all his years, he had never had this happen. Literally, everyone was out tonight! While we were listening to him, he really wanted to make it an intimate show, and what better way to do this, than to turn around and say hi and shake hands with the people you are sitting with. After all you are literally sitting next to them; why not make them a friend for the duration. Which we did just that.

Alright, now he was really ready to kick the night up a notch. With fantastic disco fever in the air, the lights that surround him and shone on the audience were also brightly coloured and really made you just feel happy. I mean, how can you not? You’re at a Lionel Ritchie concert!

His backdrop screen was split in 2, so that the whole arena could enjoy seeing the beautiful soul man that he was, and if you were even extra lucky, yourself while the camera would intermittently swoop through the crowd and you would have your moment of fame on the big screen. Singing off onto his next song, ‘Stuck on you’, every single person was singing along like we were back in the 70’s again.

He now took a moment to chat with us again; it really was like he was talking to each of us individually, like our own personal informal one on one show. He took a moment to re-live how groovy the 70 really is and that he had so much fun not only making the music but competing against other people of that era and really owning in.

Lionel then describes his time with the Commodores and drops a huge excitement of a bomb, when he makes his good and long-time friend, Ron LaPread, stand up and take his moment of recognition also! What I didn’t realise is that he also lives here in Auckland!! Wow! The whole audience goes insane, cheering for both of them and Ron stands up looking bashful but ever humble as he was here tonight to enjoy the show, not to perform it.

With super amounts of hype Lionel takes moment, to have a jacket change into a smooth Penguin jacket with amazing embroidery on silk on the inside, sits down as his piano one more time, and starts to sing the beautiful love song, ‘Three times a lady’, and all you can see and feel is all the love in the room. Couples dancing everywhere, ladies swooning over him, the mood was really set.

After his song was finished, he stood up and pointed out a front stage couple, told them they need to get a room! It was quite laughable, and Lionel has quite the sense of humour, as it wasn’t the first time during the night he had pointed them out. The couple loved it and so did the crowd.

Onto another is his greatest hit, “Sail On” there was no end in sight! He even said so himself, that he could keep playing and singing to us all night long if he were able to! While these songs were playing he had pictures of himself 30 years earlier at other concerts, festivals, and the rest of his group and he really had not aged. It was amazing to see he still had the same hype today as he did back then.

And to keep in with the motion of love and all things great, his timeless classic, “My Endless Love’ was sung next, with a small twist. Ladies in the room sang along with him like a duet. It was amazing to hear.

Changing it up a wee bit, and knowing the show can’t go on forever, “You are my Destiny” was performed. It really is just such a big party! Everyone is singing along, dancing, have a fantastic time. He takes a moment to slow things down again, singing another timeless beauty, “Hello”. By this point, every single person is so captivated by him and no one wanted the night to end. Not at all.

Once finished, he stands up and you can just see in his eyes the overwhelmed joy and happiness he has for us all being there with him. He takes a moment to remember all his friends who are no longer with us, Maurice White, Natalie Cole, Whitney Houston, B.B King, David Bowie, George Michael and Prince…. He asks that we all say a small prayer for them as they were all taken too soon in their lives.

This rolls into the next song that he helped write and perform with the late Michael Jackson, “We are the World” and now he asks us to sing along again, this time with the words on the big screen! It was very emotional but also a happy time to remember those not with us anymore. He finishes the night off with a bang! Takes his bow, thanks us for being an amazing audience and goes off stage.

However, with this much hype he cannot be done, can he? Sure enough, a quick third and final jacket change and he’s back on stage! Wearing a sparkly black number, he cannot resist an encore and what a better way to round off the night with “All Night Long”, it’s quite fitting really. So much hype, excitement, emotion, love, happiness, there are just not enough words to describe how truly amazing tonight was. Were you there to groove on down as well?

Love the photos?  Check out many more from Davids collection right here