Kirk Hunter Studios might not be a household name here in New Zealand but the Los Angeles-based development team, headed by audio engineer and classical violinist Kirk Hunter, have had sample libraries available since 1997.

Their latest Native Instruments Kontakt based offering Virtuoso Ensembles features a unique interface and solid sample recordings that should grab your attention if you’re in the market for an orchestral library. 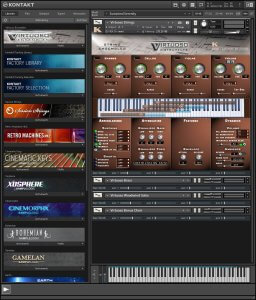 While we had no issues installing the library, it is a very rudimentary, manual affair. You will need to download a bunch of RAR files, extract those and then manually drag all the contents to your library folder.

Once you’ve done all that simply open Kontakt and add the library. It works fine, as we know the file structure of Kontakt, but I fear unsavvy PC users might trip up here getting everything setup. An automated installer would be nice.

The entire library is quite small for a string collection, weighing in at a spritely 2.55gig. So while downloading this won’t chew up your monthly data cap, concerns do arise for as to the depth of such a frugal sample library offering so much on the box.

Getting into the action

Right off the bat the GUI looks dated, very similar to the old Gigastudio graphics from the early 2000’s, and the multi patches don’t even have a header. Though this is largely cosmetic, next to the big gun ProjectSam and Spitfire Audio offerings, Virtuoso Ensembles looks shabby. 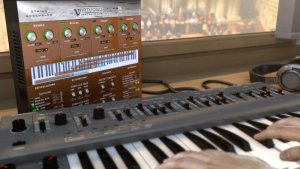 Appearances aside, Virtuoso Ensembles is a total joy to use straight out of the box. Even if you’re a total newbie to Kontakt or virtual sample libraries, you will appreciate Virtuoso Ensembles’s instinctively simple structure allowing you to dive straight in to creating music.

You have two main patch categories to choose from – instruments and multi’s.  The instruments section is split into ensembles and separate sections and the multi’s basically a large collection of preset arrangements.

The interface features four slots for instruments, a keyboard graphical representation of your keyboard for layering each of the slotted instruments, and finally an effect, eq and articulation control area at the bottom. Each of the four instrument slots has volume, pan, poly/legato and range controls, and the violin slot offers a unique 1st 8ve split option which throws the first violin section up an octave.  The percussion category differs totally, featuring a single keyboard layout with individual hits mapped across its width.

The provided articulations offer a good selection from sustained arco, marcato and tremolo through to short staccato, spiccato and pizzicato – though annoyingly the default keymapping is outside the range of a standard 88-note keyboard. The sustain articulations are at the left-hand side of your keyboard with the shorts at the right, but you will need to shorten the range of your sample groups and remap the keys if you want access to everything. This is not as bad as it sounds in practice, as you don’t really need full control like that when you’re performing. When editing, of course, your sequencer has access to these extended areas. 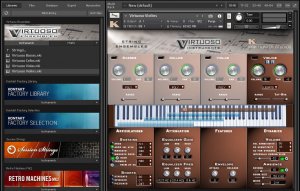 The main party trick is these four individual instrument slots.  Each has been selected for the type of instrument patch, for instance; cello, violin, viola and bass for the string preset – tubas, trombones, French horns and trumpets for the brass etc.

You cannot alter the preset instruments offered in each of the slots, only turn them off and on – however each of the presets are well chosen and balanced.

If you wanted to create an ensemble featuring, for instance, viola, cello and trumpet, you would need to load separate instances of string and brass instruments, then mute the slots you don’t want.  It’s a bit clunky if you want to get creative, having the option to swap out instruments within a slot would be pretty cool, but it’s not a deal-breaker.

There is a very intuitive keyboard range display so you can play with each of the four sample groups placement on your keyboard, as well as pan, volume and poly/legato for each. Then there are global controls for articulations, EQ, dynamics and reverb.

The developer has really pushed for a conductor’s feel with this library, and largely they have pulled that off. Being able to quickly pan and mix volume within small ensemble section while retaining the global dynamics for the collective group is fast and lets you focus less on the tech and more on the music.

There are no mic placement variations available which leave Virtuoso Ensembles a little limited for high-end film scoring, and the included ambience controls are woeful.

Virtuoso Ensembles does, however, offer an upfront sound with a very immediate and responsive feel to playing. Some of the multi patches are quite simply stunning – if you’re looking for Mind Heist style horns blasts, you’ve come to the right place. While you can achieve softer and quite tones, Virtuoso Ensembles feels happier when you’re holding down huge 10-note power chords at full noise.

While the preset instruments sound excellent, they are all totally drowned in reverb. I thought this might have been a trick to hide possible average samples, but everything still sounds great dry. You just need to manually pull back the reverb amount and room size to get a more natural sound. Doing so also opens up the sound more making everything sound a bit fuller and more present. The included reverb ambience is better avoided in favour of higher quality 3rd party plugins. 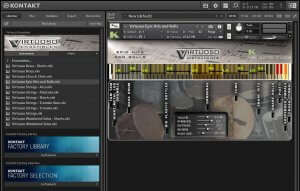 The piano is an oddity. Much like the rest of the library it is very responsive to play and has a pleasing, bell-like tone that fits well when mixed with other orchestral instruments. My issue is the overly compressed sound lacks dynamics when played as a solo instrument. It’s tough to get much feel, particularly in the left had as the sound is really attacking and rather lifeless. On the upside though, the default reverb works incredibly well here, you can hear all the overtones and reflections bouncing around, again bringing even more epic qualities. Hitting any of the low notes in anger with the sustain peddle down results in an extremely pleasing rumble.

In the context of this library, the piano is a real gem. I have found myself going back to it often to doodle on for new musical ideas – putting my beloved MOTIF back in the cupboard for a while. As I mentioned, it’s rather lifeless and one-dimensional as a solo instrument, but mixed in with the other orchestral instruments it really shines.

The timpani and kettle drums are amazing as well, though the Sfzroll articulation introduces some annoying phasing and the rolls are not tempo synced, making that feature almost unusable. As with everything you need to pull back the reverb a lot, but the ‘add epic bass’ button is brilliant. There is also an extremely useful ‘Epic Hits and Rolls’ patch containing a bunch of excellent percussion elements like tam tams, crashes, cymbal rolls, snares and tom hits.

The choir instruments are not overly convincing in solo mode, but blended with an orchestral patch they bring the right amount of epic to the mix.

So a bit of a mixed bag with the accessory instruments, but some really nice surprise as well.  The system requirements are acceptable and most patches load quickly. The only issue we found is a large draw on CPU resources for simply moving the volume or pan controls.

Kirk Hunter Studios are a boutique developer, so some degree of leniency can be afforded to the rough edges, but on the whole Virtuoso Ensembles is an excellent concept and delivers in spades with performance.

Though it reflects excellent value, I refuse to add a ‘for the money’ quantifier – products should stand on their own merit in the market, regardless of price. You are getting amazing bang for your buck here though, with so much packed into the library, the $300 USD price tag reflects excellent buying.  The main value here for me is the simplistic nature of this library over the competition. You won’t get phrase designed patches like Sonokinetic, or huge selections of mic placements like VSL, but the access to quick, on-the-fly manipulation of dynamics is the key selling point. Its unique approach is simple and effective, without a huge learning curve and hours of manual trolling.

In short time Virtuoso Ensembles has become one of my favourite instrument libraries. I imported a few old mixes into Reaper that had Kontakt string libraries and replaced them with Virtuoso Ensembles – this brought a surprising new dimension to the mixes, cutting through more than the previous sounds. While I’m not a fan of the default fx, using a quality 3rd party reverb like UVI amazing Sparkverb brings everything to life.

Virtuoso Ensembles also is an instrument that develops the more you use it.  Once you become familiar with the workings and feel of the samples you find more and more interesting ways to use it in projects.

I can easily recommend this for pretty much any form of composition, though due to its edgy, upfront sound, for me it leans a little more towards contemporary pop and perhaps cinematic film and trailer scoring.  Kirk Hunter Studios are on the right track with this library and I’m excited to see what the future brings for the company.