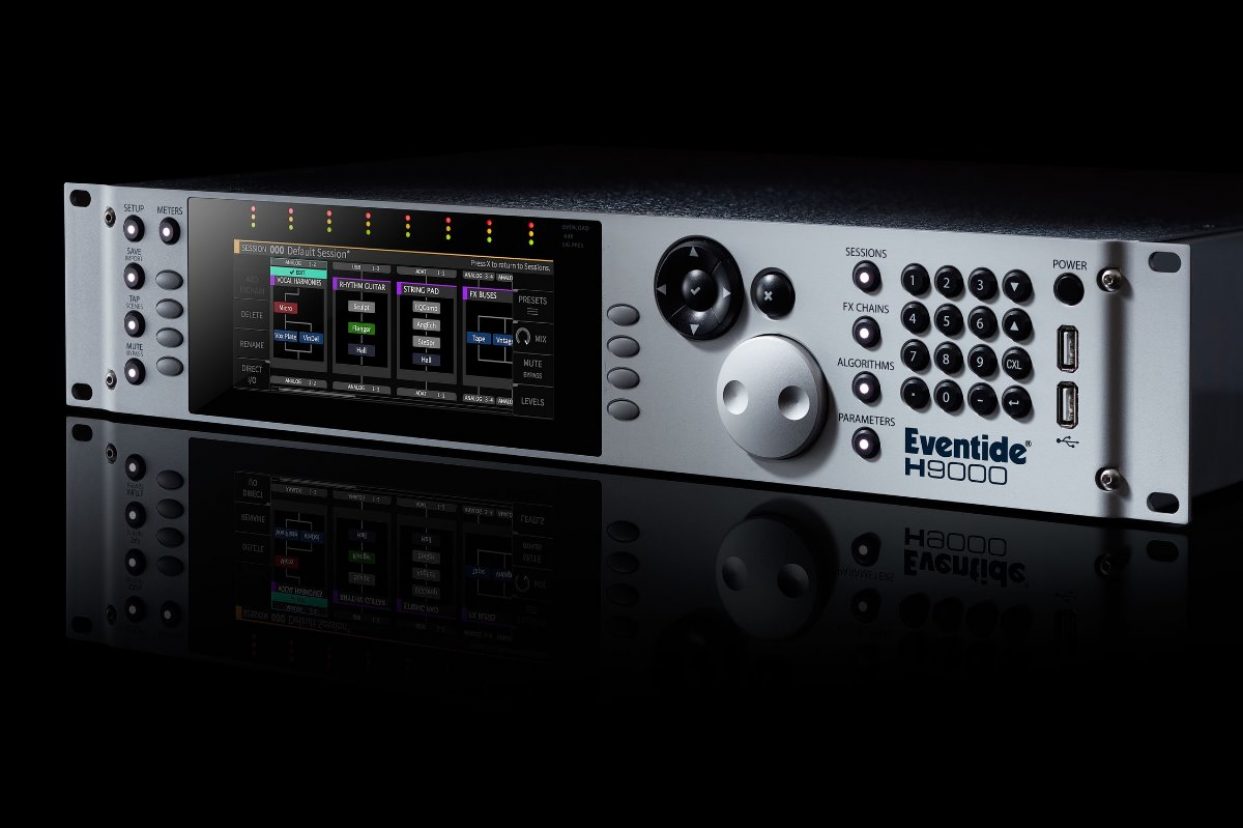 The culmination of a multi-year development cycle, the H9000 features four quad core ARM processors serving as 16 DSP engines, eight channels of pristine analog audio I/O, AES/EBU, ADAT, 16 USB audio channels, and, optionally, connection to standard audio networks, including MADI, Dante, Ravenna, and more.
Multichannel processing makes the H9000 a suitable platform for surround sound and for processing several tracks of audio simultaneously. On top of that, the H9000 introduces the concept of FX CHAINS, allowing users to connect any set of four effects with flexible routing. FX CHAINS can be created to act as a voice channel, a guitar ‘pedal board’, or a modular synth with effects, etc.
The H9000’s remote control application, emote, is available for users working ‘in the box’ or over an audio network. emote is available as a standalone app for Mac and PC, and as an AU, VST, and Pro Tools plug-in.
Says Eventide ‘resident fossil’ Anthony Agnello: “Audio effects designers are power-hungry souls. We have an insatiable thirst for processing power. With each advance in processing speed and storage capacity, new — often unimagined — effects become possible.
“In the early Eighties, pro audio’s first rackmount multi-effects processor, the SP2016, was used by researchers and developers to create groundbreaking effects. Back then, artificial reverberation was the holy grail, and the SP2016 excelled at reverbs — both natural and unnatural, including infinite reverbs, inverse reverbs, gated reverbs, and more besides. But the SP2016 was designed as a general-purpose processor, and, as a consequence, new, innovative effects like shimmer, band delay, timescramble, and vocoding became commercially available for the first time.
“The SP2016’s successor, the H3000, was the premier rackmount processor of the Nineties, and introduced a wealth of new effects. The H4000 and H8000 flagships were the most powerful rack boxes of their time and helped usher in the concept of surround sound reverb. The H9000 is ready to take its place at the pinnacle of our product line and we’re eager to discover the kinds of new effects that lie in store.”
Eventide will be demonstrating the H9000 alongside award-winning plug-ins on Booth #321 at AES New York 2017 — the 143rd International Convention — on October 18-20, Jacob J. Javits Convention Center, USA.

Check out the latest Blog entry from electronic musician Jack Impink (a.k.a. Gestalt7) — who has been beta-testing the H9000 while working with the Eventide Development Lab — here: https://www.eventideaudio.com/blog/gestalt7/news-lab-h9000-part-1

'Hullabaloo' is the first single from Roulettes’ forthcoming EP Rocket To You out May 29.‘Hullabaloo’ sportsa killer guitar riff andsizzles with crackling energy.Says frontman Justin McLean, “Hullabaloo was born out of annoyance, and irritation with...

Self-described “popstar for dorks” Geoff Ong has released his new single, ‘I Don’t Know’, from his debut album. The Auckland-based singer-songwriter and producer is on a mission to make pop music with authenticity and connection, especially for people who don’t always feel like they fit in and...