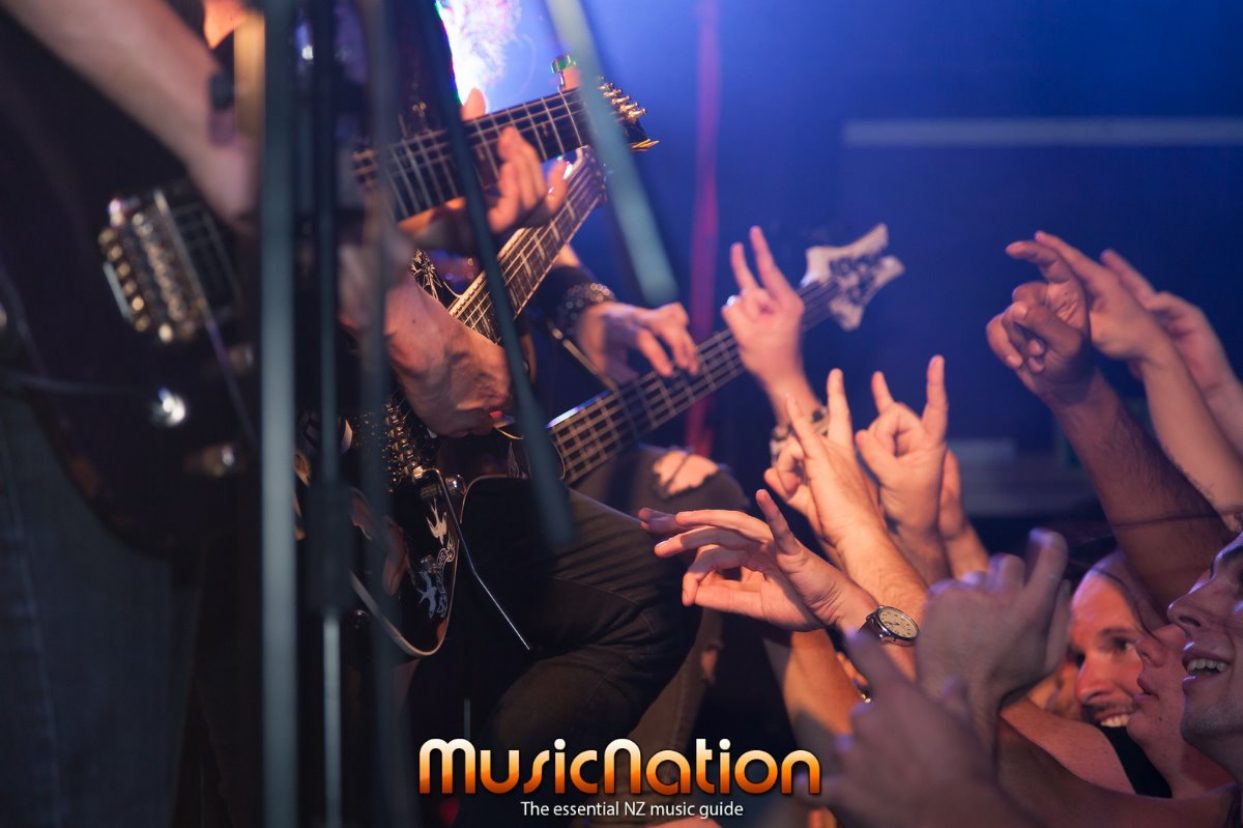 On the afternoon of May 17th 2007, a trio of late teenaged metal-heads sat excitedly in the office of one of their parents, a convenient walk away from the Powerstation in Eden Terrace. Their favourite band was playing there that night, and they had a plan in place to secure the spot they rightfully deserved as the biggest fans in Auckland; front and centre, right below the lead singer. Hours before doors opened the trio made their way hurriedly to the venue on foot. One of them, a sweating ball of teenage odour, hobbled in front of the pack, leading the charge with unmatched vigour. That is until in his focused tunnel vision of fanboy excitement, he failed to notice a protrusion in the concrete ahead of him, tripped, pulled his calf muscle and fell abruptly onto his face.

That night, I literally bled for DragonForce.

DragonForce is a power metal band known for its unique blend of catchy melodies, extremely fast rhythm sections and quirky solo duels between guitarists Herman Li and Sam Totman. They became a household name after their single, Through the Fire and the Flames was featured as the most difficult song on Guitar Hero 3 and achieved mainstream success as a result. DragonForce even earned a Grammy Nomination for best metal performance in 2008. The mass hype surrounding the band has since died down but they continue to enjoy a dedicated fan base, having released their 7th studio album, Reaching Into Infinity earlier this year.

The lunacy of my teenage obsession with DragonForce has been a continued source of embarrassment long since I moved on to other musical interests. The night of their concert in 2007 is a prime source of ammunition for friends of mine. They have never forgotten the fuss I kicked up over being sent to the under 18 balcony area, losing the spot I envisioned myself gawking at the band to ‘fucking posers in their Trivium shirts who are only here because of Guitar Hero’. They never forgot how I screamed every lyric from the edge of the balcony and sweated so much that everyone around me became wet. They never forgot how when we finally spotted Herman Li after the concert, my immediate reaction was to sprint towards him yelling ‘I love you’, repeatedly.

They never forgot, and neither have I. So, when another member of our fanboy trio, The Speakeasy regular, Lincoln Vaz was unable to attend the most recent DragonForce concert and offered his tickets to me in exchange for writing a review, my initial reaction was a painful cringe. Why would I want to relive the most embarrassing moments of my teenage life? Besides, this is a band that at the time of my obsession received much criticism for regurgitating a lot of their writing material and for being unable to perform their highly technical songs well live. I later realised the truth of some of these criticisms and eventually lost interest in the band.

Was this really going to be a worthwhile experience? There was only one way to find out.

Kicking off the night at the Kings Arms Tavern was Kiwi power metal quintet, Storm Forge. For those of you unfamiliar with the genre, power metal is what happened when a group of Iron Maiden and Queen fans picked up their instruments after finishing an epic, month-long Dungeons and Dragons campaign and decided to sing about it. At least this is how I imagine it all began. The result is an underground cultural phenomenon that caters perfectly to the intersection between Fantasy and Metal fans, with bands like Blind Guardian and Iced Earth being the key flag bearers. Storm Forge proved to be a dedicated embodiment of the genre, with tunes varying from the ferociously fast to sombre and melodic power metal archetypes. The band were incredibly skilled, delivering a tight performance of technically intensive tunes. This was epitomised by vocalist Courtney O’Leary’s massive vocal range, as well as lead guitarist Raj Singaraj’s dead-on shred solos. Having met these guys back in my high school years, it was great to witness how much they’ve improved. As comical and charismatic showmen, they got the crowd going with the classic chants and sing-alongs expected of any live power metal performance. A fantastic start to the night, and a great reminder of why I loved power metal so much as a teenager.

Following the Stormforge set, another band climbed on stage to plug in and tweak their equipment. Among them was an alluring woman sporting bright red hair and decorated with gothic clothing and an array of Satanic symbolism. From the moment she walked on stage, Jolene Tempest of Wellington’s Bullet Belt had the room’s attention. Black metal is a genre born out of Anti-Christian movements in 1980s Europe. Dark, on-stage theatricality is a must for any black metal band and Tempest certainly had this aspect down to perfection. I found it difficult to take my eyes off of her. As the band thrashed into their first track, Tempest’s terrifying scream captured the room, with the women in the audience notably connecting with her presence. The band blasted through song after song of rapid double kick drumming and grinding guitars reminiscent of early black metal bands such as Bathory. Sadly, on top of not being the biggest fan of black metal, the quality of the sound and jarring scream-vocals made the songs difficult for me to fully appreciate. During the set my gig buddy, Jamie made me a proposition. ‘I’ll give you 10 bucks if you can name one word in the lyrics’. I tried, but the best I could do was ‘I dunno, probably “Satan”’. For me, the technical prowess of the band and the haunting beauty of the vocalist weren’t enough to capture my full attention, but it was a unique and memorable experience nonetheless.

Finally, the moment I had been eagerly anticipating and simultaneously dreading had arrived. Odd flashes of that night of fanboy foolery 10 years ago caressed my mind, but I put them aside, doing my best to steer my mind to the moment at hand. The dramatic instrumental intro to the new DragonForce album, Reaching Into Infinity swept in as a backing track as members of the band arrived on stage one by one. The crowd erupted into a cheerful roar, and so did I. Seeing Herman Li glide across the small stage followed by his partner in crime, Kiwi guitarist Sam Totman hit me with a wave of nostalgia. Herman’s long wavy hair hanging by his waist and Sam’s cheeky grin flooded my mind with memories of a younger me trawling Youtube for hours on end watching DragonForce interviews, live performances and guitar tutorials. I’d listen to their music on repeat through months of cramming maths equations and physics formulas, taking breaks only to peruse the work of Japanese manga artists with imaginative uses of barely clothed women and tentacle monsters. Friends and I would blast Sonic Firestorm while playing level after level of Quake 3 and Diablo 2 at LAN parties, the aroma of 2 minute noodles combined with a potent pubic waft drifting through the dense air. This band was a treasure trove of fond yet almost forgotten memories for me, and I suspect this was the case for many others in the audience.

Kicking off the concert with Ashes of Dawn, a tune from their latest album, the band were off to a fantastic start. Although unfamiliar with the material, I was engaged by the thrilling enthusiasm of their frontman, Marc Hudson, who was performing with his right arm in a cast. Of course, he took time after the song to clarify that he did not in fact obtain the injury through masturbation. Having been absent from DragonForce’s fan base for almost a decade, I was pleasantly surprised to hear a song that while technically impressive, had toned down their signature extreme speed and adopted romantic melodic sensibilities akin to classic power metallers, Sonata Arctica. This theme of maturity and experimentation in their new material was consistent throughout the concert. Another new tune played later, The Edge of the World, fully embraces their death metal influences, with the vocalist performing an unexpected scream breakdown akin to an Opeth song sandwiched between the band’s familiar video-game inspired synth melodies and a guitar solo. As an old school fan, I was pleasantly surprised to enjoy much of their newer material on my first listen.

The second tune, Operation Ground and Pound turned the nostalgia up a notch, the bouncy rhythm and catchy oriental melodies sending the whole room into a synchronised bounce. Later, the tune that caught the attention of the entire guitar community, Fury of the Storm kicked in. Though in the past they had been criticised for sloppiness in live renditions of their ultra-fast tunes, I found this performance to be almost completely on-point. Herman Li really can shred like a beast, and harmonised melodies with his counterpart, Sam were played with ease. With the performance of debut album classic, Heart of a Dragon and the encore finisher of the massively popular Through the Fire and the Flames, it really felt like it was 2007 again.

The tunes themselves aside, the intermission banter and charismatic showmanship of every band member frequently brought smiles and laughter to the crowd. Herman Li and Sam Totman poked faces at one another, licked their strings and held notes down on each others’ guitars during solos; a warm embodiment of guitar shred duelist culture from the 80s. Bassist Frédéric Leclercq picked up a guitar and performed a comical virtuoso shred medley of retro video game tunes including Ken’s theme from Street Fighter and the Green Hill Zone from Sonic the Hedgehog; a tribute to the band’s signature video game vibe. At one point, several fans chanted their demand for vocalist Marc to do a “shoey”, that is, to drink beer from his own shoe. Marc skilfully manoeuvred his way out of it by getting one of the fans to jump on stage and show him how it’s done instead; a gross, but hilarious moment.

My only criticisms of the performance were the notable absence of a keyboardist, paired with the notable presence of keyboard melodies, along with other obvious uses of a backing track. It didn’t bother me, but I do appreciate more organic live renditions.

Over all, fans old and new had a blast at the DragonForce concert. Entertaining opening acts followed by an energetic, skilful and hilarious performance by DragonForce made for one memorable night. As for my journey to my past as an unwashed teenager, I found myself looking back on it quite fondly, much to my surprise. I was stoked to connect once again with the band I loved so dearly, and these old familiar personalities that I admired just a little bit too much.