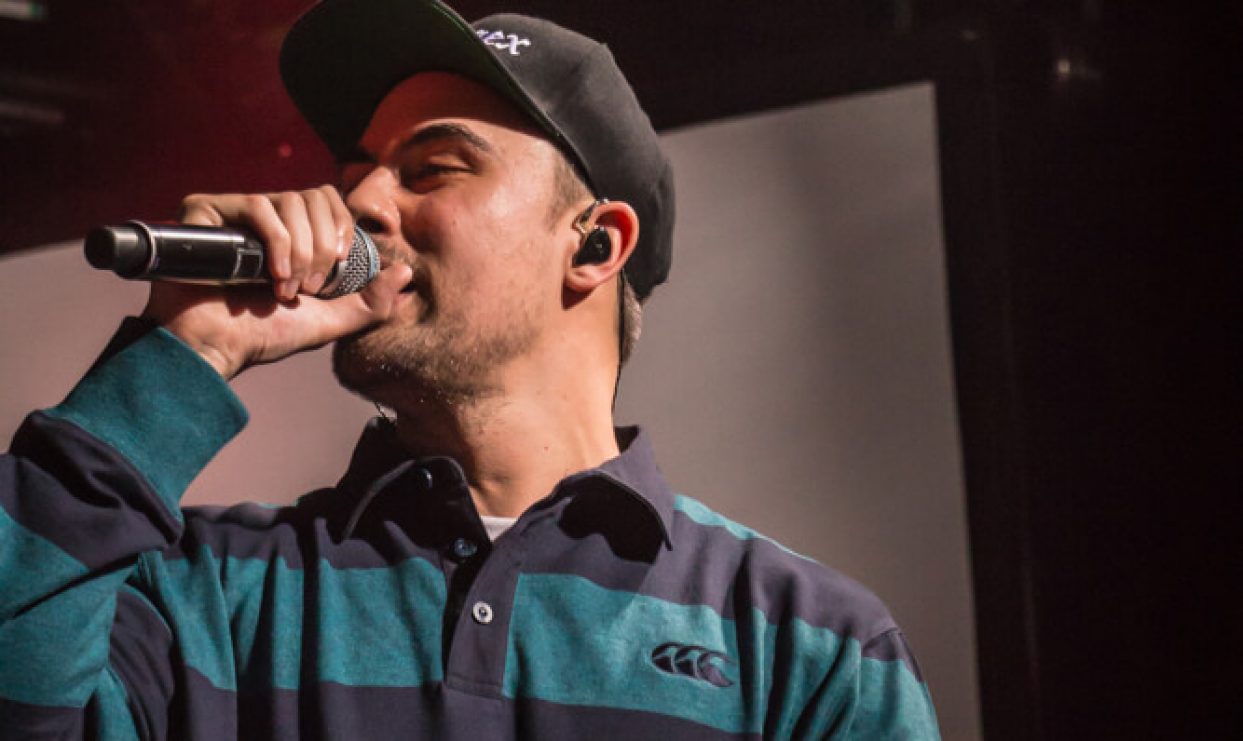 In the words of musician Dam Funk, “you need to keep your hood pass intact ya’ll, cuz you never know when you gon’ need to go back.” Well, Kiwi rapper David Dallas was back in his hood playing live and loud to a packed AKL crowd.

‘Hood pass intact’ is also a lyric on the title track of his new album ‘Hood Country Club’. Recorded at Red Bull Studios, it looks at Kiwi life and reacts to the homegrown hip hop scene. It follows his award-winning album ‘Falling into Place’ that won 2 Tuis at the NZ Music Awards in 2013.

David wrote on his Facebook event page prior to the gig, “it didn’t feel right to release my first album in 4 years, then cruise off on the Oz before playing at home.” He went on to say “This is my first headline show in Auckland in 3 years. At Powerstation – the venue where I saw my first hip hop show. Full circle mate. If I forget the words my bad.” You had nothing to worry about David, you did good!

As a massive hip hop fan, I’ve had interesting experiences with hip hop artists at the Powerstation. I couldn’t get a Kendrick Lamar pre-sale back in 2012 so I went down to the venue in the hope of getting a door sale. I waiting outside the door for 3 hours, but couldn’t get a ticket so had to listen to muffled “swimming pool full of liquor” lyrics from the outside. That said, I’ve had great experiences at the Powerstation too, getting selfies with hip hop legends Common, DJ Premier and Peter Rock. I see David Dallas as NZ’s answer to Common. His original and authentic lyrics put him in the same league as these ‘conscious rap’ greats.

After local hip hop favourite Raiza Biza had warmed up the crowd, David finally arrived on the stage to rapturous applause in hood country club-esque attire – a preppy striped polo with a street-looking cap.

I’m very short so it was relatively easy to jostle my way nearer the front. A guy next to me screamed “I’ve been here from the beginning!” and mouthed all the lyrics. Another behind me shouted, “I’ve been a fan since Day 1!” There was a really positive proud vibe coming from the crowd.

David’s rise to fame from being a computer science graduate to opening for Eminem at Western Springs in 2014 has been meteoric. Born in Papatoetoe, David is Afakasi, half European and half Samoan. In his opening track ‘Probably’, he alludes to his struggles growing up; “Probably because I’m not talking it up, because I’m South Auckland AF.”

The track ‘Ring a Bell’ with lyrics “Does my name ring a bell? If It don’t, it will before long” got the crowd whipped into a frenzy. It was for me the catchiest song of the night.

‘This is It’ resonated, especially with the lyric “Tell mum to save me a plate.”

Dallas then went through hits ‘Take a Picture’ (where he unconventionally holds a kitten in the music video rather than a gun) Then followed with hits ‘Indulge Me’ and ‘South Side’ rapping about being “from land of flightless bird, I’m about to grow wings.”

He performed his 2015 single ‘Don’t Rate That’ with lyrics reacting to league star Stacey Jones appearing in adverts for Instant Finance;

“Wish that I could aim at these finance companies in the hood
Posing like they doing something good
Fuck outta here
Always putting more brown people on the ads
Knowing damn well they tryna trick us out of cash
Sports Star front the campaigns, ain’t it sad”

The knockout for me was his 2004 remix of ‘Not Many’. My friend and I rushed towards the stage but were so excited that my friend slipped in heels and fell face down by the sound desk! I literally had to hoist her up so we could continue to mosh to the rest of the song.

Then Dallas’ struck a home run with ‘Runnin’. This track went platinum in NZ in 2013 and featured on FIFA computer game.

The crowd cheered for Dallas as he finished his encore song. In the loos, I overheard girls chatting that they thought the show was a bit short. Perhaps he should have done 2 encore songs, he definitely deserved it!

This was a fine celebration of Kiwi hip hop and the show never felt cheesy or forced. In the words of Scribe and ‘Not Many’, “how many dudes you know who got the skills to go in and rock a show like this, uh uh uh uh, I don’t know anybody”….I do! His name is David Dallas.