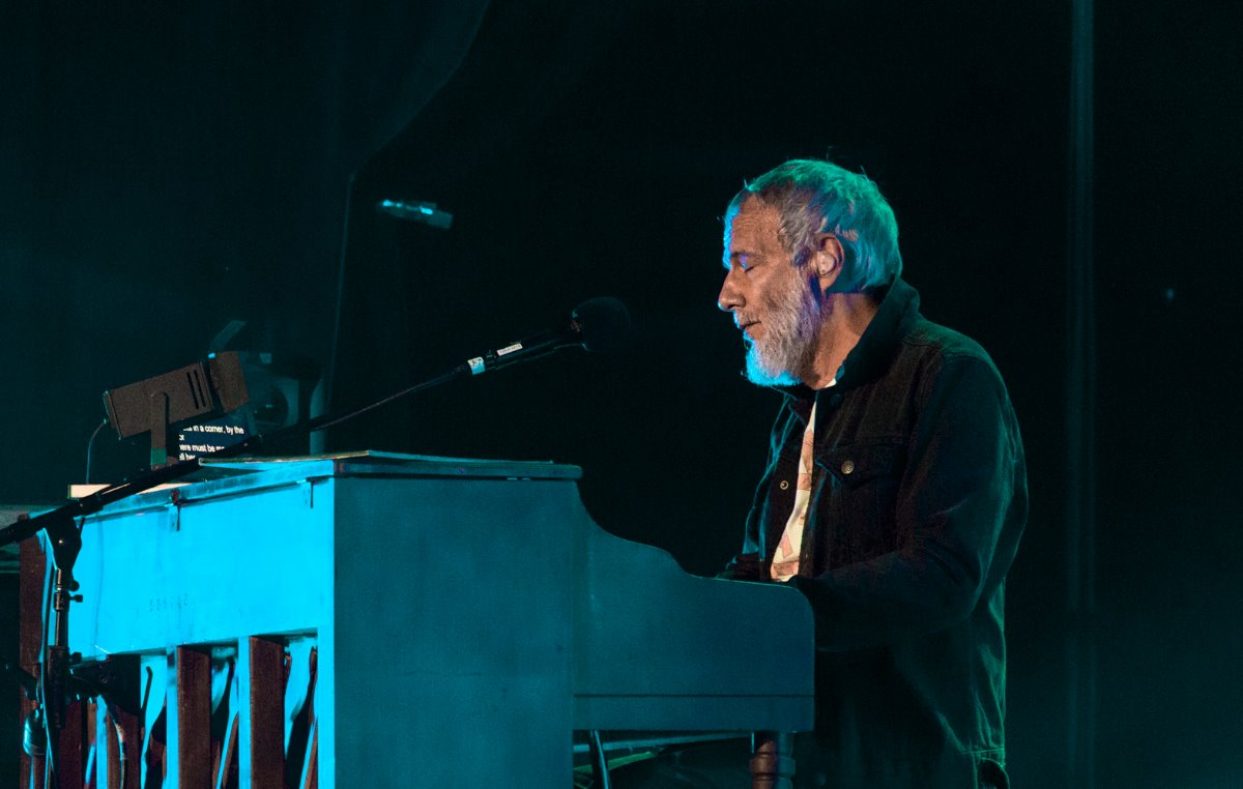 As I sit here and recall the wonderful evening I’ve just had, I realise how much I truly didn’t know about the man we all know as Cat Stevens. I like to think I know a little bit about who he is, however his show told us all a different story.

As we sit anxiously waiting for the show to start, I know I’m in for a treat as the stage has been set up as if I was going to the theatre. The 50th anniversary “The cat’s attic, peace train tour” now makes complete sense.

Let me set the scene for you a wee bit. Not only is the stage set up as if it was in the UK at a west end train station as we all board the ‘peace train’ that is so well known, Cat Stevens appears on stage looking very much as excited to perform as we are all to hear him play. Picking up his first amazing light brown guitar, almost looks like it could be made of oak, he plays and it sounds every bit as if we were listening to vinyl.

He plays 2 songs and then starts to talk in between and explain how the 50th Anniversary tour is put together and how he became to perform again. When he was a child he really loved Disney and Van Gough as well as the theatre and that he knew he was destined to grow up and do something creative with his life, but never did he know it would take the pathways that it did.

Growing up in the attic above his parents coffee shop, hence the tour name, a curtain drops to the floor to reveal the stage he has set for the rest of the evening with his musicians all alongside him as well. He then goes into great detail on what really broke it for him as a performer. After many times of trying to figure out what he wants, funnily enough, the song that really did it for him, The Beatles Twist and Shout. He literally walked over to a record player and dropped the vinyl on and let it play! He got up had a dance and a groove and you could just see him light up!

His father had then decided to give him eight pounds so he could buy his first very own box, and he was away! He was then able to write his first very own song, Matthew and Son. He soon became to realise that actually, the music industry was not as easy as he thought it was going to be. He really had to work for it and try extra hard to crack into it! Not what he thought it was going to be. He had bosses who were working him super hard and this is when he wrote his next song about the bosses. He performed this amazingly, and not only was it him front and centre, but he made sure to have all his other musicians around him close by to create the magic of the night.  He had 2 big screens on either side of the stage as well as 2 curtain drops, of this which had beautifully playing videos that portrayed an almost childlike picture of how he was feeling in each song.

By now he has written 3 songs and it was his fourth song that was his biggest flop and didn’t do well, which is then when he finally realised he had hit a wall in his “supposed” music career. He started doing what any rockstar did back in the 60’s/70’s and really started to ‘party’! Through too much alcohol and ‘purple haze’ with Jimi Hendrix, he started to spiral into a dark hole and wasn’t really sure what to do. He had by now overexerted his body and soul and had to be taken away to the hospital, where he found out at this point he was ill with TB.

I still am so amazed at how many personal details he was sharing with us! Here was just any other man, who happened to be a musician, sharing his life story with us and man was it deep!! Between the songs he wrote and how every one of them actually had a way bigger meaning, I now have a new found respect for this man, I call a legend.

After he managed to recover somewhat, he decided he wasn’t quite ready to give up on the industry just yet and he found new musicians and a new producer where he was given the freedom to write whatever and however he wanted. I quote “My songs then started to lineate my new path”. He went on an extremely soul searching faze as he felt like a lost child. As he said, he felt just like the refugee children do, lost with nowhere to go. What a way to conclude the first half of the night and into a short intermission! How much more could I possibly learn from this man and hearing his soul be poured into his music!

Back from a short intermission, he now sits down at a piano and begins to play. My naivety I didn’t realise he played, but it gave a new insight to his emotion. By this point he was still a very lost person and still wasn’t feeling like he was on the correct path. Better than before but still in a dark place. He went to visit a friend in the states, Malibu, where they decided to go for a swim. When he looked back he realised he had actually drifted quite far out and soon realised he was in trouble as he was quite tired and didn’t have the energy to swim back. At this point, he decided to reach out to God. He said “God, if you help me out of this predicament, I promise to dedicate my whole life to you. I feel as if it’s just not quite my time” and while he was bobbing in the water wonder if that was it, a small wave came along and helped him back to land. It was at that point he knew that music was no longer his path, so he put down his guitar and never played again and really did dedicate the next 27 years to doing God’s work.

His son one day brought a guitar back into the house and began to play. Music clearly runs in the family. Cat Stevens then began to wonder if maybe he still had a job to do….. and this is when he began to play and put together this amazing tour.

I truly felt like I had been on this journey with him, the way he not only described his life, but the songs that all went with each period of his life. They all had a much deeper meaning and it was quite moving and really something very special to have been able to be a part of this, what is most likely to be, his final tour.

Yusuf, if you are reading this, then I am greatly humbled and very thankful that you shared this with us in such a fantastic show-stopping performance, with all your classic songs, your life story. It truly did move me. Thank you.