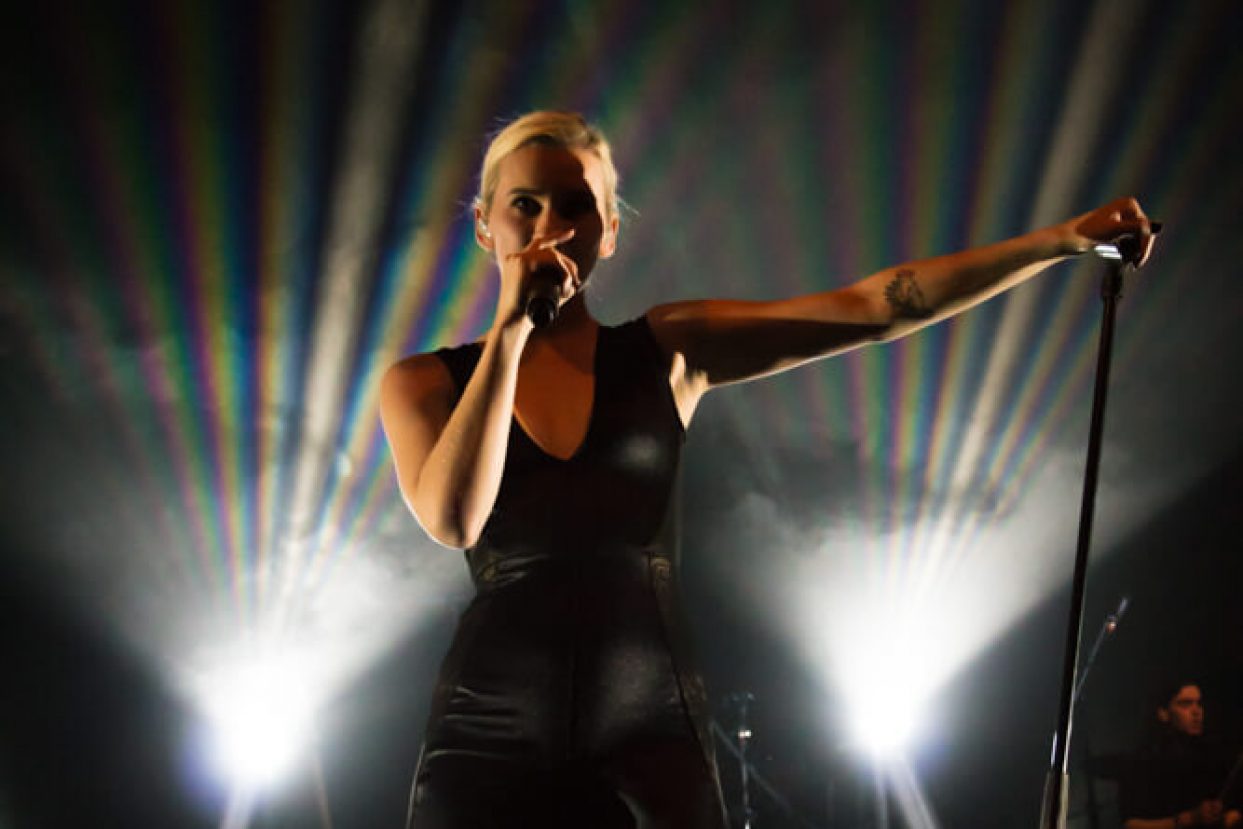 Attired in tasselled jacket, singer Georgia Nott and sartorially futuristic brother Caleb on keys took the stage with band in tow, as the group tore into their set starting off with the ambient Conscious, the title track to their newly released album.

Broods have come a long way in a short period of time. The freakishly youthful brother-sister duo have just finished touring with siren Ellie Goulding, plus had time for a fleeting performance on The Late Late Show with comedian/actor James Corden. Not bad going for the brother & sister team who originally hail from Nelson, yep, you heard right that place.

Pampering to the mostly millennial crowd, the duo picked up the pace on faster numbers Hold The Line and throwback track Everytime as Georgia religiously paced the stage, her suggestive dance moves and fervent energy of the band only egging the crowd on as she let loose. “Hey Auckland, You’re here to have fun, let’s do it”.

I’m a big fan of the group’s earlier work, to me it struck a more mature aspect in their song writing and sound. It was nice to hear Bridges & Never Gonna Change thrown in there, while new song Freak Of Nature featuring nubile Swede popster Tove Lo was openly dedicated to “anyone knowing someone struggling with mental illness”.

Having seen the duo play before they continue to impress. Their brand of twee pop works, while the new songs translate well live. Songs like current radio darling Free, Full Blown Love and Couldn’t Believe garnish a big international sound, together with Caleb’s keyboard melodies enhance that catchiness and first time appeal their songs seem ridiculously riddled with.

Aussie pop star Jarryd James was an added surprise as he joined Georgia & Caleb for an intimate unplugged set. James stayed to sing his new single 1000x before quickly exiting as if to do his next gig, leaving the cherubic pair to showcase their acoustic skills. Georgia’s vocals were given a good range workout on ballads All of Your Glory and Sleep Baby Sleep.

Tonight I was in the mood for Broods and they didn’t disappoint, albeit I felt a little uncomfortable pushing my way up the front of the mostly scholastic crowd, I’m glad I did. Georgia possessing one of the most infectious pop voices is aptly steered by her brother driving the music they communicate to audiences. The synergy is real, made more believable through their sibling bond, over time this can only get better – more power to them.