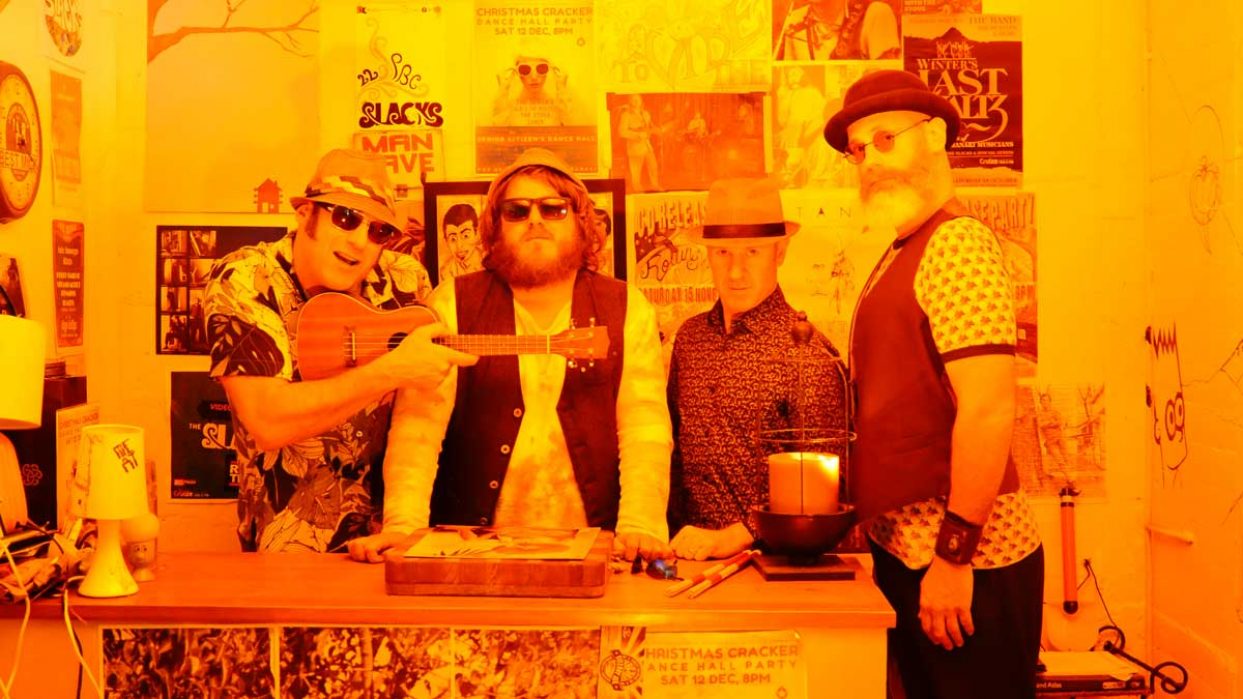 You want great yarns and great music then Mark Armstrong from The Slacks is your man. The bold Hawaiian shirt means business. Clearly, a man who knows the game and that this is my first bigwig interview, he informs me that borrowing a pen and writing on the back of an envelope may not be the best way of gathering information and that I may want to try using a voice recorder. The man is a genius but clearly doesn’t know that I am equipped with a memory of a card counter in Vegas.

It’s great when the person you are interviewing is someone who you previously worked with and has that same witty cool sense of style with his answers. Interestingly enough, our deep conversation of putting a teardrop tattoo on my face as intimidation to scare my students was a great segway into one of the nitty-gritty questions I had prepared….

Q: So if you had to get a tattoo on your face what would it be?

A: (as he lols at my suggestion of a love heart or smiley face he brings it home with his reply) Probably the Facebook poke right by the eye.

Need I say more? Actually, I will. This is the kinda craic the boys Mark Armstrong, Scotty Armstrong, Blake Gibson and Zane Greig from The Slacks have. Formed in 2001 with original band member and brother Scotty the band has made a couple of band member changes over the years. I proudly share with Mark how I did some research on the band before Mark throws it out of the park with a childhood memory involving a penis and a pot-belly stove that affected the name of the band, but for you to get that dear reader you need to keep on reading on. But my original mentioning of research was the connection between the band’s name and their albums Suppressed Inventions in 2003, and Welcome to the Vibe in 2014. The meaning behind their name and albums is to not let the working life get in the way of your ability to relax. The self-proclaimed proactivecrastinators…really gets to me. 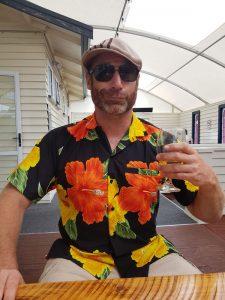 Q: So you guys are about sticking to the man?

A: It’s not really about sticking to the man, it’s more about prioritising relaxing. So your working life doesn’t approach in your relaxing, and you’re kicking back and your taking care of yourself. That’s truly slack. Everyone’s born with true slack but whether or not you choose to exercise it…That’s the philosophy.

However, when the band first got together they weren’t originally living to their name with their first album Suppressed Inventions. “Nobody heard of it really, it was quite raw. We were just starting out”. Two members of the band ended up leaving The Slacks who were living a life being anything but.

Q: You sound like you were The Busy’s more than The Slacks?

And after some time away travelling the world and letting life get in the way the band reformed with two new members in 2008 and got their hippie punk groove back into full swing. In 2016 they released the summer hit Big Aroha that became an internet sensation and the attention of John Campbell and RNZ. A mixture of Te Reo Mᾱori and English it has that backyard, sunny day, drinking beers, having a laugh feel about it…another great Segway.

Q: My plan for you was, if you say you guys are about quantity I would have provided you with a box of Double Brown’s or else if you say quality I would’ve handed you a $17 craft beer.

A: The Slacks definitely love Do Bro’s. It is actually not too bad a beer. Maybe next time you will actually have the beers prepared rather than throwing out broken promises?

He hits me right where it hurts but reassure him I will get him that box of beers. Maybe at their next gig at WOMAD in Taranaki March 16 – 18 where they will be releasing their next single Yeah Nah. He tells me that it is a comment on New Zealand language and society – kiwitanga, with them completing shooting for the music video for it on Waitangi Day…Chur, I cannot wait!

A: Sommes Island. Our mate works on there. Kakariki, Tuatara, Blue penguins all around us loving it. We actually ended up playing on the coastguard ship on the way back too. It was epic. Also Luminate festival in Golden Bay. 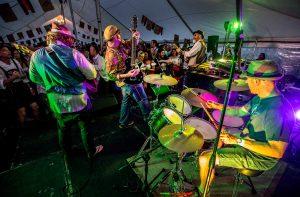 Q: A venue you would love to play?

A: South by South West in Austin, Texas.

A: Mud people. (Although they have played for naked crowds and said that was pretty bare ass too – get used to the puns people)

They love festivals and their music is about the momentum of the party. With festivals, the party is already there.

So it’s near the end of the article and I think it’s time you get the childhood story that “affected” the name of the band. When I mentioned I had done my research, Mark assumed it was about when he was nine year-old and burnt his penis on the fire. He had run from the bath and lifted his towel with his outstretched arms in front of the fire to accumulate all the warmth from the fire. Somehow (and we came up with suggestions as to how) the curiosity got the better of him and he ended up with a burned willy. Good friends and band The Blistered Fingers have made their name in Taranaki which cancelled the opportunity to be called The Blistered Foreskin or the Sacks, but hey I think the name The Slacks really calls out to my proactive-crastinating anyway.

So the plans this year for The Slacks? It is a busy one with the release of their single Yeah Nah at WOMAD next month, Hokitika Wild foods festival, Summer series with Jordan Luck band, Spirit Festival, release another single mid-year with a tour June/July and then the release of their 3rd album at the end of the year. In 2019 he bewilders me with the 50th anniversary of Woodstock and they are already planning a memorial festival in the wops of Taranaki.

If you haven’t already check these guys out – their song Big Aroha is on youtube and really suits the scorcher of a summer we have been having. Otherwise, Facebook or theslacks.bandcamp.com where you can buy their music. From what I’ve seen and heard, this years works from The Slacks should be one to add to the ‘Pool Room’.