MODO BASS is a 64-bit application and requires a 64 bit CPU and Operating System.

IK Multimedia Modo Bass – It’s All About That Bass

Welcome to our latest hands-on review, this time we’re looking at the latest in virtual bass emulation from IK Multimedia, the highly anticipated Modo Bass. Power up ya bottom end and let’s get into it. 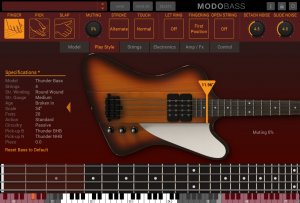 As with other IK Multimedia software titles we’ve reviewed, installing Modo Bass was a breeze and the only mildly annoying authorisation is fairly painless and quickly sorted.

Modo Bass loads as a VSTi in your host DAW or as a stand-alone app on your desktop. Immediately you’re presented with a very sexy front-end UI, featuring a number of dream basses, starting with the venerable ’60’s P-Bass’. A quick play with the options so Modo could see my MIDI keyboard and I was away.

Right off the cuff, the default Fender is very convincing. Being physically modelled, not individually sampled notes, I was dubious the sound was going to be a good as the promo videos.  I do have a late 90’s Fender in the studio to compare it too, but I didn’t need to plug it in, I’ve very familiar with the sound.

The Modo version is a little hyped right out of the box – a little too hi-fi, but still nice and definitely with the trademark ‘scooped’ mid Fender sound. There’s a lot of finger noise, as if you have the action set a little low, but nothing offensive. With only a little fiddling on the string selection and pickup tone I had a pretty good sounding Fender J bass.

Playing Modo with the keyboard is a lot more musical and intuitive than I was expecting, light years ahead of your standard GM or synth bass. By default, your mod wheel controls vibrato and your pitch slider allows up to 24 semitones (!) with realistic fret sliding noises, cool stuff. Various other controls, such as legato slides, muting and chords are also available via mappable and learnable CC controls. Standard key articulations include ghost notes, pull-offs, plus other various articulations depending one what play style you’re set on (finger, slap or pick).

All in all, Modo is very playable and extremely responsive. With only a short period learning the controls and setting up amp tone I was pulling off some serious Flea grooves like a boss. 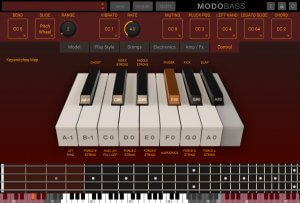 Modo comes packaged with a pair of amp simulators to choose from – solid state or tube, both with EQ, limiter and DI controls. Both have a good amount of control, though the tube amp model stands out as the more rounded option tone to my ears.

You get full control over your bass’s electronics, pickup selection and placement, string gauge and even play style. You have 12 pickup variations to choose from for each of the pickup slots allocated on your bass, which can also be moved around to the ideal placement. All feature noticeable tones differences and not just gimmick as I first thought – the amount of freedom you get to customise your perfect axe is surprisingly reflective in the sound, it’s not all eye candy.

Modo Bass comes with a huge selection of presets, most of which are very convincing. You are, however, limited by the real-world physical scale of the bass you choose, so it if looks like a 4 string, E is your lowest note. I’m sure extra bass models will be coming soon to the Custom Shop for you to download, hopefully, some more amp models too as the included ones are a bit lacklustre. 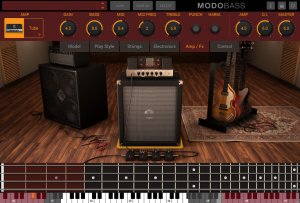 When inserted on a track I had mixed results. Mostly the basses blended in and were usually lost in the mix, even with an exaggerated gain or mid-EQ boost. The built-in amp’s helped to cut through a little, though I had best results when bypassing them and using a 3rd party amp sims. The included amps are better for big boomy rock, dub or the likes, not so much for metal, prog or any kind of soloing. 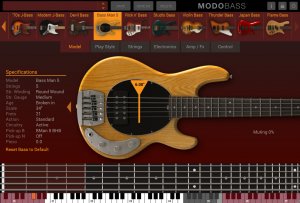 All of the included basses sound great, though I was really disappointed with the Rickenbacker 501, it sounds very timid compared to the real McCoy. Installing active pickups and boosting the treble works, but that was the only one that stood out to me as not quite on point. The Stingray 5 and Hofner Violin basses are standouts, really close to the originals.

Modo Bass features a huge collection of bass models with some very clever behind the scenes physical modelling going on.

The benefit of having more control often leads to poor sound quality, but not so here. Even pushing Modo to extremes with crazy configurations and super-fast tempo 8th note sequences, nothing sounded weird or phasey.

At $300 NZD Modo is a steal (actually only $150 NZD if you’ve spent $150 or more with IK Multimedia in the past), there’s nothing else with the level of customisation available on the market. Spectrasonics Trilian does offer a few nice models (the Hardcore bass comes to mind) with far better amp modelling and FX, but you won’t get the control and customisation as with Modo Bass.

If some alternative amp models become available to download, Modo Bass will have it all, and it looks drop dead gorgeous to boot. Not every bass guitar model included is a 100% pitch-perfect replica, but they are all pretty damn impressive and totally usable in most music sessions. Highly recommended.

GUITAR FURY is an extensive 43 GB collection of nearly 600 multi-sampled guitars and guitar-inspired instrument presets. This is cinematic diversity at its finest, featuring multi-sampled performances captured by guitar impresario Steve Ouimette and programmed to perfection by the Sample Logic...

Famed for bringing new technologies to creative musicians by building innovative and unique musical instruments, Polyend is proud to announce availability of its aptly- named Limited Edition Black Medusa — a (literally) limited-edition of the Medusa hybrid synthesizer jointly released to...